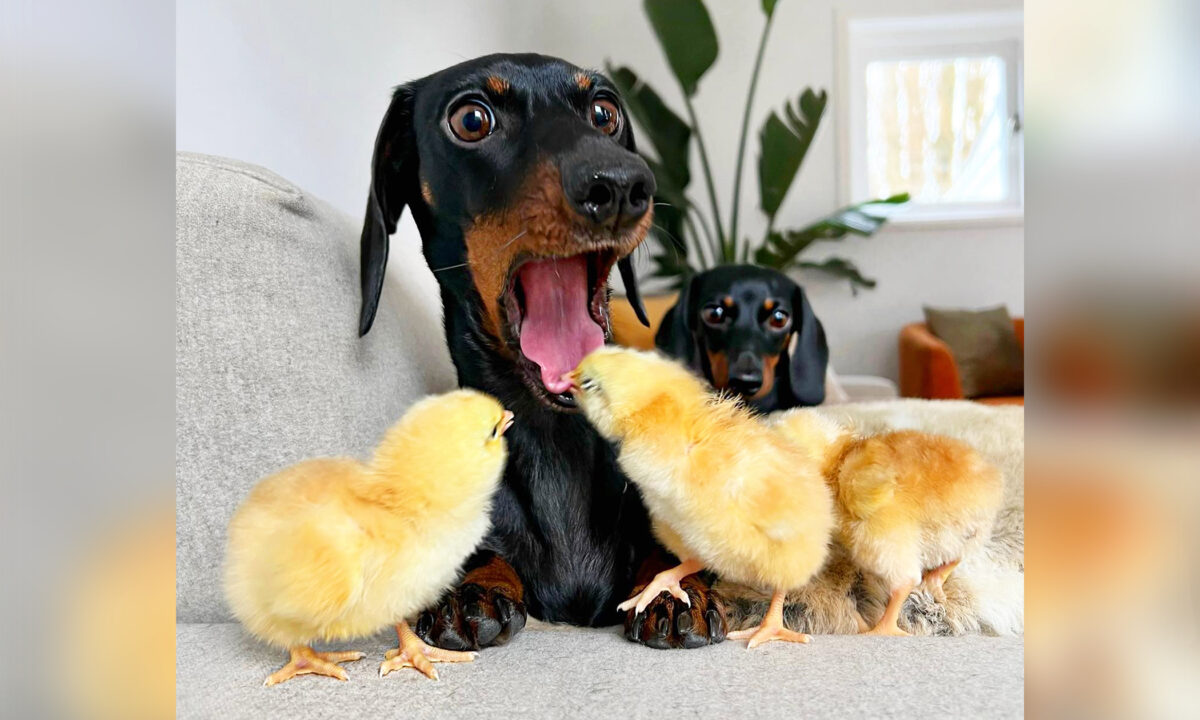 A hilarious image has captured the priceless facial expression of a mini dachshund when she got bitten by a baby chick.

Loulou, a 4 1/2-year-old dachshund, stays with her daughter, Coco, 2 1/2 years old, and some other animals at Eveline Smith’s house in the Netherlands.

The mini dachshund joined the family of four when she was just 8 weeks old and has been with them ever since.

Eveline, 38, told The Epoch Times that the family had just wanted a one-time litter with Loulou, thus resulting in the equally adorable Coco.

Sharing more about the mother-daughter duo’s personalities, Eveline said: “[They] both have a calm character, no hunting instinct (which we are lucky with, with so many animals).”

Additionally, they both love the beach; with Coco being really playful and Loulou enjoying food.

“As calm as she is, it doesn’t stop her from jumping on the table and finishing our plates,” Eveline said. “We also call her Sharkie.”

Eveline, who regularly chronicles their life along with the other animals, said that people love the wonderfully animated sausage dogs.

“I show so much on our channels how we live, and most people find Loulou and Coco very sweet,” she shared.

In an Instagram post from Feb. 22, Eveline captured the moment when Loulou was bitten by a chick. Sharing more details of the picture, which has left netizens in stitches, she said that Loulou and Coco had jumped on the couch with a few baby chicks, as they are used to each other and get along very well.

Meanwhile, the little chicks are curious and tend to peck at everything that moves and shines.

Seeing this adorable frame, Eveline began clicking some snaps. However, she hadn’t realized until later that Loulou was bitten by a chick.

“It went so fast that I only saw it later on the photo that the chick had her tongue,” Eveline told The Epoch Times. “Loulou kept calm as always, but her facial expressions are always priceless.”

Eveline said that Loulou didn’t get up and leave because she enjoys their company and spends all day long with the chicks; even lying down with them and wagging her tail over time in their presence.

Although Eveline is no stranger to Loulou’s antics, she laughed at her facial expressions.

The post has since amassed over 130,000 reactions, with many finding the picture to be both sweet and funny. However, those who were seeing the dogs interact with other animals for the first time said they were “surprised” or “afraid” that it would go wrong, Eveline said, since dachshunds are hunting dogs by nature.

Hence Eveline reassures concerned netizens, saying: “I understand that, but I know their characters so well and don’t force anything. I make videos and pictures of what really happened at that moment.”

For Eveline—who has grown up with different animals—Loulou and Coco are part of her family.

“Time with our family is the most important thing there is,” Eveline said. “We care and hope that they have the best possible life.”