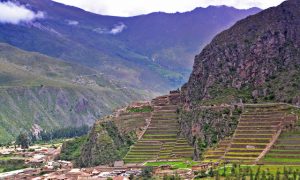 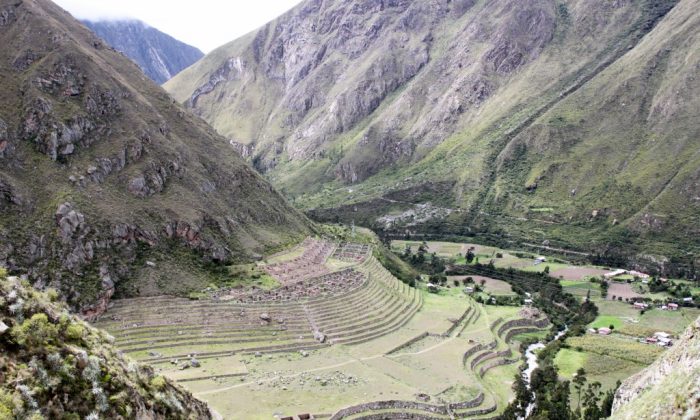 Read my tips and budget for the Inca trail here and my post about reaching Machu Picchu here.

Hiking the four day Inca Trail is a once-in-a-lifetime experience connecting astonishing scenery, ancient Inca ruins and breathtaking mountain tops (quite literally speaking). It is genuinely difficult, but it’s also the most dramatic way to arrive at Machu Picchu. Traversing the Andes Mountains with thousands of steps, it passes through cloud forests, jungle, alpine tundra and Inca archaeological sites before you’re rewarded with the majestic sight of Machu Picchu from the Sun Gate.

We booked the tour with Wayki trek, and they invited us in for a briefing a few days before departure. This was in order to meet the rest of the group and to get briefed on the plan for the days to come. Our group of seven consisted of Phil & Sarah from UK/Ireland, Freya & Manuel from Australia, us and José, our guide.

And then there were the porters. Most of them were farmers, and their job was to carry our tents, sleeping bags, food, clothes and such (up to 20kg each). During the day, they race ahead to the campsite and make everything ready before the group arrive, then cook and serve three-course menus. These guys are pros – do not try to race them, because you will fail. Miserably. They literally blazed right past me each time I was leaning against a mountain side gasping for air and a defibrillator.

Read more about prices and my review of Wayki trek here.

Day one started bright and early at 6am. We got picked up at 7am, drove 1,5 hours to the porters’ village in the mountains and had breakfast. After that we went to the village of Ollantaytambo at 2.750 meters to buy supplies – water, plastic ponchos, snacks and such. We then started with a five-hour push towards the Wayllabamba campsite where we’d break for lunch at 2.950 meters.

My favorite moment of the day was passing the Inca ceremonial site of Llactapata (which in Quechua means “hummingbird village”). We saw the site of 100 houses from a mountain top when the sun had just come out. The view was absolutely breathtaking.

Meanwhile, José, whom also went under the name “the drug supplier”, offered us some coca leaves for the altitude. Due to sheer group pressure, I reluctantly chewed the coca leaves (which tasted like grass) and took a bite of some sweetener that looked like chalk. Supposedly, it should help ease the altitude sickness, but all I achieved was nausea and complete numbness of my mouth. I will never be a coca addict.

At 1pm we got to the lunch camp. Having trekked ahead, the porters had set up a little lunch tent and water bowls for washing up. We got a delicious (and beautifully decorated) avocado with parmesan starter, pumpkin soup followed by meat, rice, sides and then tea and cake for dessert. Literally, every course was like this with different meals every day. In fact, it was the best food we had on our entire South America trip.

After lunch we walked for another two hours in a somewhat flat terrain. As we arrived at the Ayapata campsite (3.476 meters) at 4pm that afternoon, I felt both relieved and proud. We had survived day one and with shockingly un-sore muscles. As a little bonus, the porters greeted us with “happy hour” which consisted of coca tea and popcorn followed by a warm foot bath. I was sold immediately.

Day two started as the previous had ended – powerful and with enthusiasm aplenty. At 5am, the porters had knocked gently on our tent while whispering: Buenos dias, senoritas, and then given us some coca tea and hot water for washing: the perfect wake-up call.

Our goal for the day was six hours of uphill hiking from 3.476 meters to the grueling Dead Woman’s Pass at 4.200 km. We had walked as a group until now, but from that point on we separated into three minor groups based on speed, and guess who was at the end…? In our defense, the other two couples were experienced trekkers or just in great shape, and we were, well, not.

The first two hours was straight uphill with some climbing, mainly on rocky, uneven steps. I was doing fine when all of a sudden the altitude knocked me out – first with a terrible headache and then my lungs betrayed me. In general, I found it hard to get my groove on during the uphill section when I had to stop for a breather every 30 seconds. Not that I’m completely out of shape, but these steps felt quite tough for someone who doesn’t answer to “Rambo”!

At this point, I recalled something the guide had told us at the briefing: To Stay Positive. So, I kept repeating it in my head like a mantra while taking one long step after the other: “You have to stay positive. You’re going to Machu Picchu.” Repeating it over and over, while envisioning in my mind’s eye how I got closer to the goal.

After seven hours (not six) of hardcore uphill trekking, we reached the top: Dead Woman’s Pass. And that basically sums up our state at that time. Despite my legs feeling like jello, I still found the strength for a victory picture. We made it. Hooray!

We immediately began the ridiculously steep descend to 3.596 meters. If it hadn’t started raining, which made the steps extremely slippery, we might have been able to reach the camp at the estimated time (1pm). But instead we took turns in slipping all the way down and eventually got there at the not so shabby time of 3pm. Later that afternoon, José asked us to guess the record of hiking the trail, and my best guess was 1,5 days. The correct answer was 3 hours. In. Your. Face.

On the morning of day three, I woke up feeling like I’d been run over by a bulldozer. Not the nicest wake-up, but getting out of our tent, I was met by this incredible sight. I know, right?

This day’s hike would mostly be a descend from 3,596 meters to 2,438, but first we had to walk uphill for two hours. During the day, we passed through three Inca sites, and the first one was Runkuraqay or the Egg Hut which was built like half a sun.

We then went down again, and the trail actually became pleasant for a while. The weather cooperated, and though we were tired, everyone was happy and excited again. This was my favorite day of them all.

We got to Sayacmarca where we had lunch right after. A very steep stairway led us to the top and the most stunning Inca site of the day.

Up until now, the weather had been impeccable. After lunch, however, the heavens decided to open.. and stay open. Within minutes, the steps turned into waterfalls and despite the ever so useful 6 soles rain poncho and should-have-been waterproof boots, we were still soaked before we reached the camp. We got there at around 3pm, having trekked downhill for two-three hours in the rain.

Low point of the day was realizing that it was impossible to dry our clothes, so they were still wet by the next morning. But that wasn’t really important. What was important was the fact that we were hours away from conquering the Inca trail. Within a few hours we would actually be at Machu Picchu.