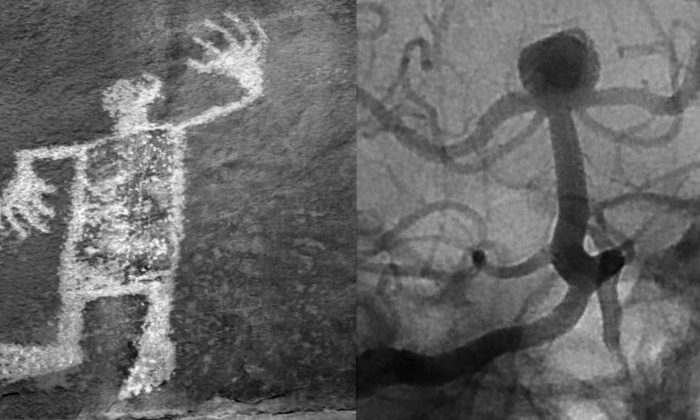 Hidden Dualities of the Physical World

OTTAWA—A wonderful multiplicity of paired readings is evident in an exhibition of work by Ottawa photographer Caroline Tallmadge currently showing at the Exposure Gallery.

Titled DYAD, which means “two,” the work is “about the relationship of form and patterns found in the internal and external physical worlds,” according to a description by Tallmadge on the gallery’s website.

Hung on the walls of the gallery are 15 paired compositions of black-and-white photographs with each pair presenting two equal-sized, complementary prints.

From left to right across both prints we see corresponding lines and curves comprising graceful light-and-dark patterns, intricate and intriguing. The left frame of each pair is a photograph of something any of us might see with our own two eyes—a tree’s branch outlined against the sky, or the corner of a building’s balustrade.

The right side of each pairing, however, is a decidedly privileged view. Each print on the right is a detail from an image made by contemporary medical technology. Most of us have not seen such imagery before. Nonetheless, these are the images our doctors study: the imagery of human bone, vein, and tissue—life forms as seen in CT scans, x-rays, angiograms, and MRIs.

Each of Tallmadge’s labels tells us exactly what she has photographed. The photograph titled “Aspen, Utah/Lower Limb Angiogram,” for example, presents outlines of jagged tree branches on the left and the bone and muscle of someone’s leg on the right. Similarly, “Tree Branch, Ottawa/Cerebral Angiogram” is composed of two frames with conjoined dark twisting outlines, left and right, lines twisting in seemingly similar ways.

Because most of the patterns are read from left-to-right with joining lines across both frames, as viewers, we read more into the patterns, too. A second or third look, for example, suggests why tree and human limb seem surprisingly alike. Are not both life forms, forms growing in cellular formations?

On the other hand, “Side-lying Bush, Rochester, New York/Cerebral Angiogram” is a tumult of dark tangle and twisting mysteries of line. Who knows what creature might be hiding there? One can almost hear the banshee’s cry.

The visionary records of the Anasazi, Hohokam, and other little-known ancient peoples are scattered high on the ledges of rock faces in the American Southwest. Anthropologists have long credited shamans with the ability to see inside and outside, and these rock-face petroglyphs as the records of such visions. One remarkable composition by Tallmadge titled “Petroglyph, Utah/Cerebral Aneurysm, Coiled,” pairs a photograph of a standing-man petroglyph with a multi-armed vertical figure of similar size. Tallmadge’s composition, too, is an inside-outside view.

“Marble Balustrade, New York City Public Library/Bone,” however, is a rush of sea water against the shoreline. Looking at the two images side-by-side, one might well imagine that the 19th-century sculptor who carved the library’s balustrade spent more than a few hours surfing a wave backwards in his mind.

Tallmadge has walked shorelines, climbed rocks, and put in her time in the medical lab. A recent graduate of the School of Photographic Arts: Ottawa, the photographer is also an anesthesiologist who works occasionally, she admits, “in the angiography suite.” As she says, the imagery of nature and of science “inform each other.”

DYAD: Photographs by Caroline Tallmadge is on view through March 3 at the Exposure Gallery, located on the second floor of Thyme & Again in Ottawa’s west end. The exhibition space is administered by the School of Photographic Arts: Ottawa.