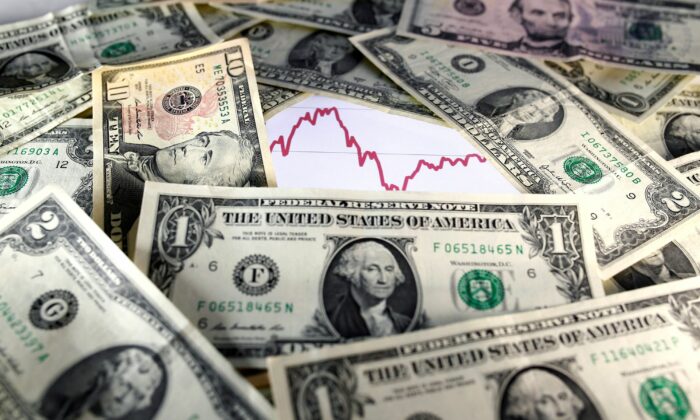 U.S. dollar notes in front of a stock graph in a picture illustration on Nov. 7, 2016. (Dado Ruvic/Illustration/Reuters)
Business Columnists

According to mainstream media explanations, derived from the conventional textbook approach to Economics, the problem is the Federal Reserve raising rates aggressively in the United States while the Bank of Japan is taking a far more judicious approach. The growing difference in potential bond market returns, therefore, in favor of dollar-denominated assets purportedly explains the sudden global investor distaste for yen and appetite for dollars.

Is that really the case?

It is absolutely the case that the yen has tanked; why it has done so, that’s another story altogether and a profoundly different one with far-reaching implications.

To begin with, the U.S. dollar’s behavior against any major currency has been consistently at odds with conventional belief. Whether that meant interest rate differentials, as claimed currently for the yen’s weakness, or the opposite when many continuously predicted the dollar’s imminent collapse due to the Federal Reserve’s constant “stimulus,” exchange values rarely work out the way they’re “supposed” to.

Back in the autumn of 2010, just prior to when Ben Bernanke’s struggling Fed was about to unleash its second massive round of “quantitative easing,” or QE, critics loudly proclaimed it reckless and dangerous because they said so much alleged money printing would devalue the currency and unleash monstrous inflation.

Brazil’s Finance Minister Guido Mantega among them had famously declared, “We’re in the midst of an international currency war, a general weakening of currency,” referring specifically to U.S. QE and the dollar.

Whenever a country finds itself in the midst of economic deficit, the idea is to print currency in order to lower its exchange value against those of its neighbors; called beggar-thy-neighbor since the intent is to take away from them by means of manipulation. A lower currency exchange rate notionally cheapens a country’s exports by comparison.

Mantega was apoplectic, believing that the U.S. Federal Reserve’s second QE was intended for that very purpose, stimulating U.S. trade exports at the expense of the rest of the world. And he was far from alone in taking that position; in fact, officials at the Federal Reserve at the same time had expected that very outcome.

Kevin Warsh of the Federal Open Market Committee (FOMC), the Federal Reserve’s policymaking body, noted his discomfort in November 2010 with the plan and its theft-like approach. Below, from the FOMC transcript for that policy meeting:

“MR. WARSH. I think it is risky pool playing in the foreign exchange markets, asking them to do so much of our work when the world’s recovery is resting on this [pushing $ down].”

Yet, the FOMC’s members, including Warsh, were of the opinion this was necessary and globally beneficial rather than provocative. Since the US and much of the rest of the world economy was showing signs of weakness so soon after the Great “Recession” had ended, American officials deemed another QE necessary especially if it ended up weakening the dollar and stimulating U.S. export expansion as everyone expected.

The whole scheme was justified as matter of sequence and timing; once America’s economy got back on track with higher exports this would then, as Mr. Warsh was saying, eventually bring the rest of the global economy along with it afterward.

There were any number of complications with the plan, of course, many expressed by those like Mantega who weren’t keen on the order of intended output and the risks they might ignite.

The biggest problem, by far, is that it didn’t work that way. At all.

As the world economy weakened further in 2011 right on into 2012, the dollar began to reverse and go higher not lower.

To find some real answers, first ditch the conventional approach, which, obviously, wrongly centers on central banks. Recent history has established that whenever the dollar goes up, bad things happen … to everyone. This begins with the global monetary system itself, which doesn’t have much use or incorporate what the Fed actually “prints” (bank reserves, not money).

For example, in 2017 the U.S. dollar declined against most major currencies even though the Federal Reserve at that time was raising its benchmark interest rates at the same time, later in that same year reducing the level of its balance sheet, known as quantitative tightening (QT). This falling dollar had nothing to do with those policies, except that they all were consistent with temporarily reflationary conditions (marked as Reflation #3 on the charts below) behind what was called “globally synchronized growth.”

That abruptly changed very early in 2018, however, even though the Federal Reserve’s policies did not. By April 2018, suddenly the dollar was rising again, “unexpectedly,” coincident to all sorts of financial and monetary incongruities; the U.S. Treasury yield curve flattened and very nearly inverted around May 2018, while the eurodollar futures curve would upturn beginning in June.

During that time, serious collateral shortages were indicated, including U.S. Treasuries being taken out from the Federal Reserve’s custody on behalf of foreign owners to get used elsewhere in the world’s monetary system to try to plug growing illiquidity and reserve deficits (above).

And it was also in June when India’s top central banker at the time, Dr. Urjit Patel, took to the pages of London’s Financial Times trying to draw attention to what the rising U.S. dollar truly signified globally. Quite simply, Patel said “dollar funding has evaporated,” increasingly scarce collateral a key reason why.

This brings us back to Japan’s current yen plight. To begin with, it’s not just been weakness in 2022. Last year had forewarned of these same monetary types long before there were any Fed rate hikes—all the while its last QE was still ongoing!

Rarely do you find a set of what should be totally unrelated indications fit together so closely (above). What rising U.S. dollar repo fails represent is collateral scarcity becoming collateral shortage, meaning tightening effective monetary conditions in the world’s global reserve currency (eurodollar, not dollar) consistent again with the dollar’s exchange value going up rather than down as consumer price indices would have you expect.

It’s not just the yen, either, as any broad survey of currency crosses shows (those dollar indices above). A broadly rising dollar proves time and again a global wrecking ball, a surefire sign of monetary tightening unrelated to the Federal Reserve, left unilluminated by the mainstream textbook.

And if the upsurging dollar in 2011 destroyed those prior notions of currency war and dollar devaluation-led inflation, as it would again in 2018 (or 2014), what does that portend for consumer prices, financial conditions, and the likely global economic situation from here on? If you’re looking for the smallest sliver of a silver lining, it won’t be inflation.