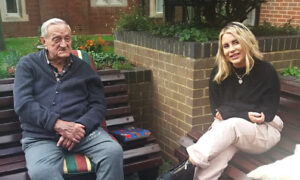 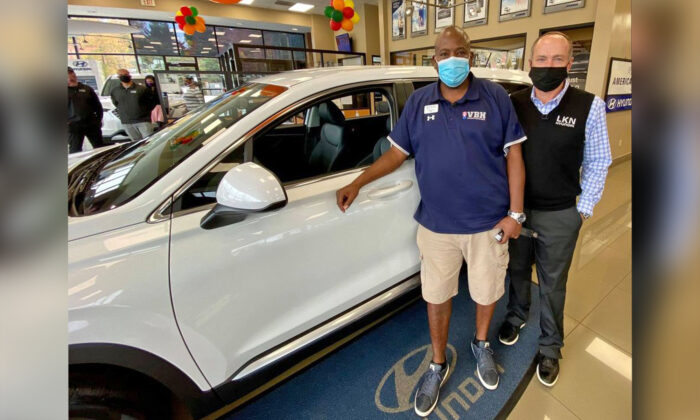 A North Carolina Army veteran got the shock of his life when he was gifted a new car for being a “hometown hero.”

Dwayne Wells agreed to accompany his colleague to an award ceremony at Lake Norman Hyundai on Veterans Day. Wells had no idea at the time that he was the intended recipient of the Hyundai Hometown Hero award and a brand-new Hyundai Santa Fe.

Upon receiving a phone call from WCNC anchor in the Hyundai showroom, revealing the big surprise, Wells dropped to his knees in shock. His colleague, Steven Cole, was his nominator.

“So he had me fooled,” Wells joked.

“I’m amazed at being selected for this,” Wells told the news station. “There’s probably a thousand other individuals that deserve it just as much as I do, but to be selected, I’m just at a loss.”

Lake Norman Hyundai’s managing partner, Cam Stewart, handed Wells the keys. “[W]e have freedom because these guys serve … and someone like Dwayne who helps others transition back into our community and helps with jobs and that kind of thing,” said Stewart, “it’s special what he does for their families.”

“Thank you, Dwayne, for your service to our country and community,” the dealership later posted on Facebook. “You are truly a hometown hero!”

Wells, who works as a care coordinator for the nonprofit Veterans Bridge Home, said he was “so excited” to continue his mission in his new set of wheels.

A Charlotte native, Wells graduated from East Mecklenburg High School at the age of 18 and enlisted in the Army as a combat engineer. He then graduated from the U.S. Army Combat Engineering School, Fort Leonard, Missouri, in 1987. He was then stationed at Warner Barracks in Bamberg, Germany, and the National Training Center in Fort Irwin, California.

“[T]hat changed me from a young kid into a man,” he reflected. “It made me who I am today.”

Wells specialized in human services, gaining invaluable experience working alongside people with developmental disabilities. Over the years, Wells became known as someone who helps anyone he comes across.

Victoria Garland, a former colleague, praised Wells for being “an amazing individual,” claiming, “He’s the one you call when you’re in a jam and he’ll find a way to work it out.”

In 2018, Wells put his years of experience to good use by joining Veterans Bridge Home. The nonprofit was established to help bridge the gap between veterans and their communities; Wells helps fellow veterans with legal, mental health, and housing issues.

Through the time at the organization, Wells has helped countless veterans and their families. However, he cited one interaction with a young lady and her homeless father as especially impactful. At the heartfelt request of the daughter, Wells found the man staying under a bridge and placed him in a hotel all in one day.

The man had lived on the streets for a decade and had missed out on much of his daughter’s life. But since Wells’s intervention, he is finding his feet.

“I take pleasure in being able to hang up the phone and know that the person on the other end is going to be okay,” Wells explained.

On Nov. 11, it was the kindly veteran’s turn to be the center of attention. Garland was thrilled. “Dwayne has given so much for so many people and really puts everyone else first,” she said.

“Dwayne is tenacious,” added Cole. “He never quits and is always looking for a way to help others. You will not find a better candidate for this car than Dwayne Wells.”