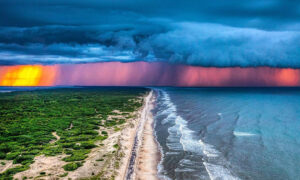 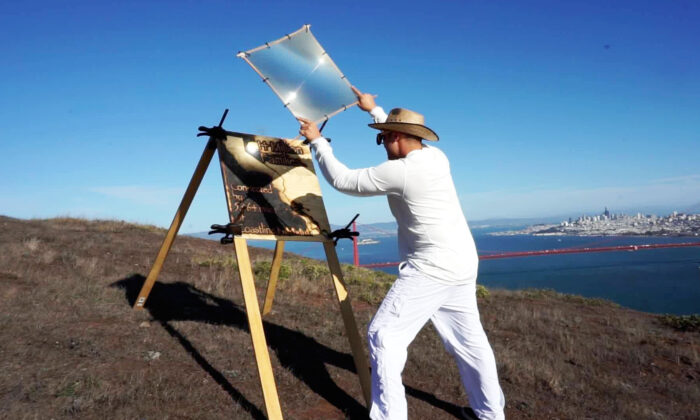 A Greek-American artist is using mirrors and lenses to concentrate the sun’s rays onto wood and stone, rendering incredible works of art in the process.

Papadakis, 34, was traveling the Silk Road from South Korea to Greece in 2012 when necessity became the mother of invention. “[I] needed to find the ultimate artist’s tool that would not take up too much space in my backpack,” he said. “I had a premonition one day in China that I could use a magnifying glass as a paintbrush that would never run out of paint.”

In an attempt to consolidate all his tools “into a single tool that could replace each of them,” he decided to put his theory to the test, using lenses and mirrors of different sizes and shapes to focus the sun’s rays onto a single point, provoking chemical changes on the surface of his chosen canvas. Using this focal point as his “paintbrush,” Papadakis was able to burn designs onto wood and even melt designs into solid stone.

He then discovered a passion for heliography, an image-rendering process invented by Joseph Nicéphore Niépce in the early 1820s.

A finished artwork can take Papadakis “anywhere from minutes to months,” depending on its size, the material used, and the detail desired. At the time of writing, the artist is working on a piece that he thinks will take four months to complete, and speculates that it may be the “largest piece of art ever created from the sun.”

To date, some of his favorite artworks include the word “Forgiveness” burned into the wood, a rendering of the American flag, and a heart forged from metal filings. He believes heliography has taught him patience and persistence, to love all things large and small, and to trust in the power of the life-giving sun.

Going by “Sunscribe,” Papadakis, who has a Bachelor’s in Fine Arts from San Francisco State University, shares his artwork on his Instagram page.

The talented artist states on his website, “this form of art had it roots embedded since ancient times but has long since been forgotten due to the ephemeral nature of the craft.”

“Everything about it corrodes with time,” he told The Epoch Times.”In fact, a piece of artwork created by the sun, when left in the sun, will completely erase itself … the same source that is used to create the art is used to corrode it; it is the cycle of life in the form of art.”

Papadakis runs artists’ workshops to impart his method to others. Feeling the power of the sun in their hands empowers his students to imagine infinitude, he said, claiming some people fear the unknown but that anything is possible.

“I am a mix of science and spirituality, and believe that the sun transcends any language barriers that exist in the world today,” Papadakis reflected. “I believe one day, we will all look up at the sun in agreement that it is the one true thing we can all agree will rise again tomorrow, and the next.”