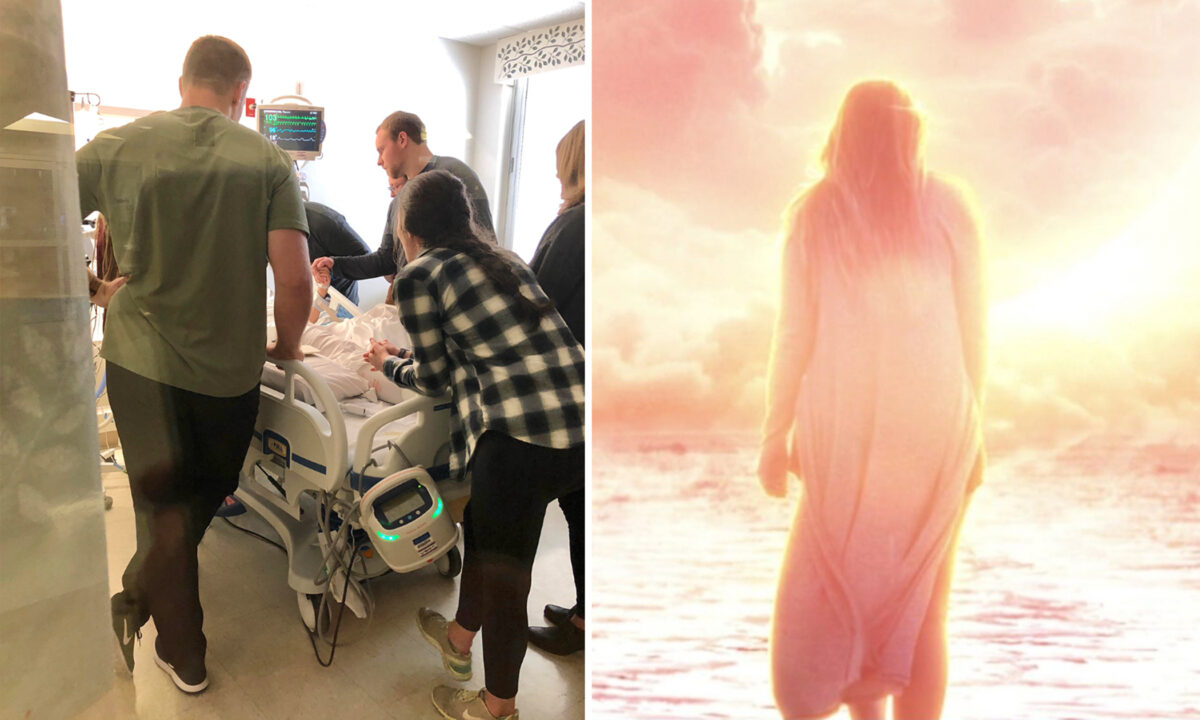 'However long I'm here in life, I want to be consumed with God and.... consumed with touching people's lives.'
BY Louise Chambers TIMEJune 14, 2022 PRINT

An Arizona woman whose heart stopped beating for 27 minutes claims she has seen God face-to-face in heaven, and it was He who orchestrated her “medically documented miracle,” bringing her back to life at His mercy. Her first words, scrawled on a piece of paper by her bedside, read, “It’s real.”

“I was before the face of God. One in a million have this happen to them, and for whatever reason, God chose for me to do this,” Tina Hines, who has made it her mission to share her testimony, told The Epoch Times.

“In those 27 minutes, I mean being dead, they had no signs of life—no breathing, no heartbeat that was showing on the monitor. I didn’t need to have this [near-death experience] happen in order to believe that God is real and that heaven is real. I’ve always believed that, deeply and passionately. But God gave it to me as a gift so that I could share more about it.”

Tina has been married to her husband, Brian, for 34 years; they share four children and are expecting their first grandchild around August. Before her near-death experience in 2018, hardworking Tina had been feeling that her “heartbeat wasn’t right,” but tests unearthed no issues. “They sent me off from the hospital and said there’s nothing wrong,” she recalled.

On the morning of Feb. 12, 2018, Tina said prayers with her prayer partner of 23 years, Dawna, and completed some student recruitment tasks for the school she worked for. After lunch with a friend, she felt “heavy-chested.”

Nonetheless, she met her close family friend Jeff Logas and husband, Brian, around 4 p.m. for a hike on Deem Hill, but fell to the ground unconscious in front of their home with her eyes rolled back and no pulse. Brian called 911 and Jeff began CPR, before Brian took over chest compressions. She continued to turn blue. Paramedics arrived minutes later and shocked Tina’s heart three times, then twice more on their way to HonorHealth Deer Valley Hospital.

“Talk about miracles … the timing of God, allowing me to be around people that could do CPR,” Tina reflected. “They put a machine around me called a LUCAS device and it did the compressions for them consistently. Once I got to the hospital, they did one more shock.

“The doctor said, ‘Well, let’s just try, she’s a healthy 51-year-old.’ That last shock was when I came out of it and could see.”

Tina had a gash on her forehead from the fall, a cracked sternum, and several cracked ribs from the CPR, and had limited to no oxygen to her brain for over 27 minutes. Doctors feared she may have sustained brain damage. Put on a ventilator and with a tube down her throat, Tina finally came out of all that emergency chaos; but, she said, she had experienced those life-changing minutes differently.

“I could see lights on the ceiling and I knew in those 27 minutes of being dead, not being able to feel anything. God totally removed all the pain,” she recalled. “I didn’t feel any of the compressions. They broke my sternum and my rib cage to get to my heart to be able to start it up again. And I felt none of that—I felt nothing.”

Tina had more to say and was desperate to share her experience immediately, but doctors placed her in an induced coma to allow her body to recover and get to the root cause of her heart attack. Frantic family flocked to the ICU waiting room, including Tina and Brian’s four grown kids, and Tina’s sister and husband-in-law.

The following day, Feb. 13, Tina woke up. And she shared what she saw in the heavenly realms.

Doctors wanted to confirm if Tina could breathe on her own, so Brian leaned down to his beloved wife’s face and asked if she could take some breaths. Within seconds, they could see Tina’s chest rise and fall. Doctors were assured that she was strong enough to breathe on her own and removed the ventilator.

Coming out of sedation, Tina started gesturing with her hands as if asking for something to write with. Her children reached for a journal and Brian placed a pen in her hand. She scribbled “It’s real,” nodding to heaven, and tears of relief fell freely. “That was the moment that my family knew everything’s going to be just fine,” Tina recalled.

“Words don’t do it justice,” she said. “I was before the face of God. I literally just saw a bright, huge sun in the background, bright yellow sun colors, and some soft clouds. I saw the [heaven’s] gates in the back. It was a euphoric, absolutely incredible sense of peace.

“A lot of people want to know, ‘Did you see family members? Did you see your pets that have passed away?’ I saw nothing except for Jesus. There were no words, it was just that presence of Jesus being with me—seeing my beautiful Savior’s face. His beautiful, amazing face standing there before me. Just He and I there together, with His arms stretched out to me and completely open drawing me into Him. We just looked at one another. There were no words, it was just that presence. I truly was blinded by the yellow, the bright yellow that was there, and the lights that were coming from behind Him.”

Tina has accepted the skepticism of non-believers, claiming that while doctors may say it was “just loss of oxygen and hallucinations,” her story contains no exaggeration. “It was seeing Jesus face-to-face, with his arms stretched out, just giving me that comfort of no pain, no trauma, no drama. It was just completely before the Lord,” she said. “Then, He sent me back.

“How else could I come back from being dead for 27 minutes and no signs of life, and come back and live a very normal life? I don’t even take heart medications any longer. God did it. God started my heartbeat again. He touched, He reached down, and He touched my heart. And He was with me in heaven. And He let me tell the story.”

Three days after her heart attack, Tina had a 2-by-2-inch defibrillator implanted near her left collarbone to monitor her heart rate. She was discharged from the hospital the very next day.

Tina’s first words after coming back to life touched her family deeply. Her niece even had the words “It’s real,” in Tina’s handwriting, tattooed on her body, and the story went viral. If her story convinces just one person to choose life because there’s a chance that God and heaven are real, said Tina, then it must be shared.

Tina claims to have been a believer since she was 5 years old. Her mother played a big role in her faith, sending her to a religious private school where her understanding intensified. Both Tina and her husband are devout Christians and are proud parents to four children: twin sons Jordan and Logan, both 30; son Jake, 24; and daughter Tatum Marie, 18. Jordan and his wife, Kaylee, are expecting their first child.

Since seeing heaven and coming back to tell the tale, Tina—who’s worked in education for 30 years—has made sharing her testimony a major part of her life and she’s met “so many amazing people” along the way.

Tina has even written a book to that end. “Heaven—It’s Real… How Dying Changes Living” is the story of Tina’s experience and the impact it has had upon her earthly existence.

Over six months, she employed the SOAP writing method—scripture, observation, application, and prayer—to put her testimony together. She confronted questions such as, “What if this happens again, how is my family going to deal with this?” concluding that God is faithful and true, and we are all here for a purpose.

“I still have an imperfect heart. I still have the weird heartbeat,” she said. ‘But I always say I have this imperfect heartbeat, but I have a perfect God. And so if God just brought me back here on this life for a few years to share the story, and for some reason, it happened again, or for some reason, my life was not physical here on Earth. I know that I’ve done exactly what God wanted me to do. So I trust him in that.

“I still owe thousands of dollars of hospital bills. I still have to deal with the everyday struggles that we all do. But ultimately, the sovereignty of God means that he’s in control no matter what. And so I trust that. And I know that and I believe that and so it changes everything on how I live here on Earth now.”

Tina believes that no matter what our challenges and painful moments in life are, every one of us needs “the hope of eternity and the hope of heaven.” She hopes that her life story would help people discover the much-needed peace within themselves and know that “God is real and heaven is real.”

Tina, who has been weaned off her heart medications and returned to training for marathon running, has found renewed purpose in her life-changing brush with death. “You don’t have a testimony unless you have a test,” she insisted. “If you don’t see the rain and the storm, you don’t end up seeing the sunshine and the rainbow at the end.