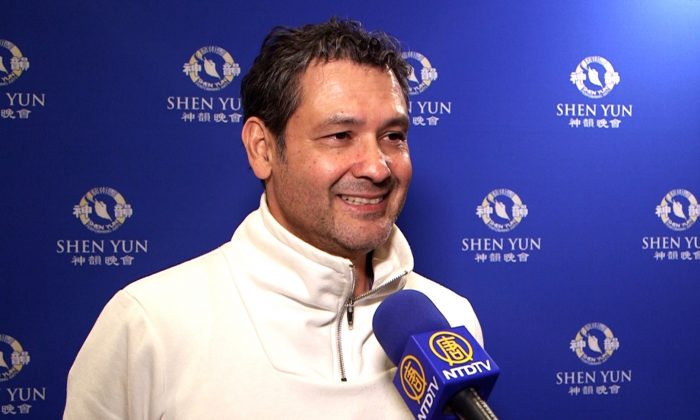 THOUSAND OAKS, Calif.—”Heaven is here, and we are going back to heaven,” said screenwriter Adolfo Aldana after attending Shen Yun Performing Arts at the Fred Kavli Theatre on March 23.

“It touches my heart,” Mr. Aldana continued. “It’s like going to heaven.”

The experience quickly became one of the most important in his life.

Shen Yun was founded in 2006 with a passion for traditional, divinely inspired Chinese culture, and a desire to share that 5000-year culture with the world through music and dance.

China was once known as Shen Zhou, the Divine Land, and its culture was said to have been a gift from the heavens. Buddhism, Taoism, and Confucianism guided people’s actions in society.

But decades of communist rule have “uprooted traditional beliefs and destroyed ancient treasures, bringing traditional 5,000 years of civilization to the brink of extinction,” according to the Shen Yun website.

Shen Yun, being based in New York, has the freedom to bring back these ancient Chinese traditions to countries across the globe through music and dance.

And it is these traditions that have touched the hearts of millions, including Mr. Aldana, who incidentally began his career as a dancer.

He said the life of a dancer is very difficult. A lot of discipline is needed to rehearse for long hours, memorize long passages of choreography, and keep stretching to maintain flexibility.

Mr. Aldana said he thinks Shen Yun’s live orchestra helps give the dancers the energy to perform so well.

“That’s what makes the whole performance,” he said. “The orchestra is the link for the dancers.”

The orchestra itself was “number one, amazing, terrific, brilliant, awesome,” said Mr. Aldana.

“Watching the lyrics of the songs, it inspired me,” said Mr. Aldana. “I heard that particular phrase that we are from heaven, and we’re waiting for our way back. It’s the most wonderful thing I ever heard.”

Mr. Aldana’s father passed away this past month, and seeing the performance, especially the solo performance of a two-stringed Chinese instrument called the erhu, made him feel like he was actually communicating with his father in heaven.

“Now I understand a lot of things, thanks to Shen Yun,” he said.

Coming back to see Shen Yun again is now one of the most important things in Mr. Aldana’s life, he said.

“I have to come back and see it again,” he said. “I invite everybody, so they can see it, they can feel, they can enjoy this sensational art performance.”