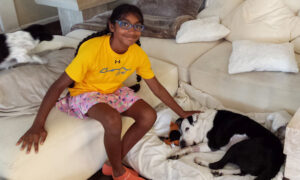 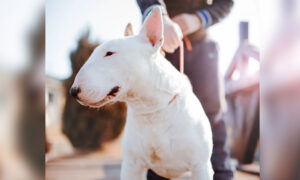 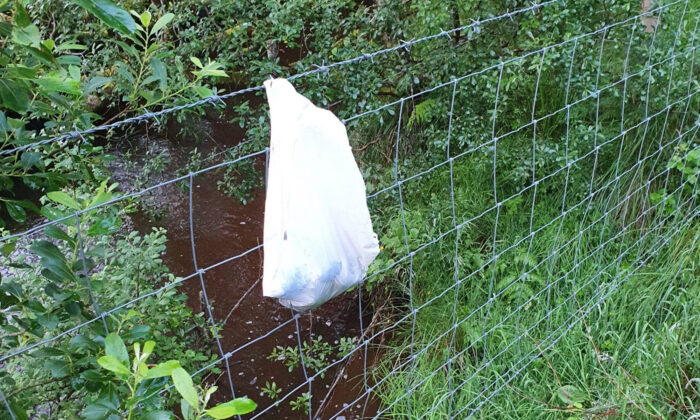 Three newborn puppies were rescued from inside a plastic bag following a failed attempt to drown them in a river. The animal welfare charity that took them in described the act as “disturbing, cruel, and heartless” in an age when pet owners should know better.

The puppies were taken in by The Irish Society for the Prevention of Cruelty to Animals (ISPCA), reports The Irish Post, and an appeal has been launched to identify the negligent owner.

On the evening of July 8, a walker passed a bridge near Drumkeen in County Donegal, Ireland, and noticed a plastic bag hanging precariously from a barbwire fence. Fearing that kittens were inside, the local called a veterinarian for help.

Dr. Alexander Smyth responded to the call, carefully retrieving the bag from the failed attempt to dump the litter into the river, and found three weak, limp newborn collie puppies. Smyth administered immediate treatment for hypothermia, hypoglycaemia, and hunger.

“It is disturbing how anyone could be so cruel and heartless to put three vulnerable little puppies in a plastic bag, leaving them to dangle over a river to an inevitable death,” ISPCA Senior Inspector Kevin McGinley told the ISPCA’s news team, adding that he had “no words” to describe the heinous deed.

“These three puppies are lucky to be alive thanks to the kindhearted member of the public,” he added, “and to Smyth Veterinary Services for rescuing them.”

It remains unclear how long the puppies were dangling from the barbwire fence, but the three little fighters responded well to their treatment. “The puppies are doing well,” Smyth confirmed, “but will require intensive support as they are very young and now orphans, and the ISPCA team will continue to provide this over the coming weeks.”

The ISPCA, releasing a statement on Facebook, revealed that the vulnerable pups were no more than 7 to 10 days old on the day of their rescue.

Comments from members of the public highlighted concern for the fate of the mother dog, as well as her abandoned puppies. “I hope [the owners] are found and prosecuted and the mother removed,” wrote one netizen. “How dare they do this. Someone knows.”

“Poor little mites,” added another, “but at least now they are in with a chance of being adopted by people who will love and care for them and give them the life they deserve.”

In the absence of their mother’s milk, the three siblings—named Fern, Alex, and Glen—were bottle-fed around the clock by dedicated ISPCA staffers. “[I]t was touch-and-go whether any of the puppies would survive,” said ISPCA Centre Manager and vet nurse Denise McCausland.

“During that first night, I hand-fed them milk by syringe nearly every hour,” she continued. “They were placed under a heat lamp to keep them warm and a ticking clock helped calm them when they cried for their mom. It was just so heartbreaking.”

The stoic puppies, however, pulled through. Photos of the collie siblings taken three weeks after their fortuitous rescue show three healthy, lively pups eating, playing, and thriving together after their near-tragic ordeal.

Smyth, reflecting on his involvement with the litter of three, called it a “tragedy in this day and age” for someone to have resorted to dumping the newborn pups like trash in a public place. “[W]ith so many animal charities and places that are willing to care for these animals,” he told the ISPCA, “the suffering of these animals could have been avoided.

“The abuse and needless suffering of animals is unacceptable,” the veterinarian added, “and we encourage if anyone has any information about any cases of abuse, neglect, or otherwise that they should make it know to authorities so it can be stopped.”

McGinley urged pet owners to act responsibly by spaying and neutering their animals to prevent unwanted litters and tragedies such as these from occurring.

Fern, Alex, and Glen will remain with the ISPCA for a few more weeks until they are fit and strong enough to find the forever homes they deserve.