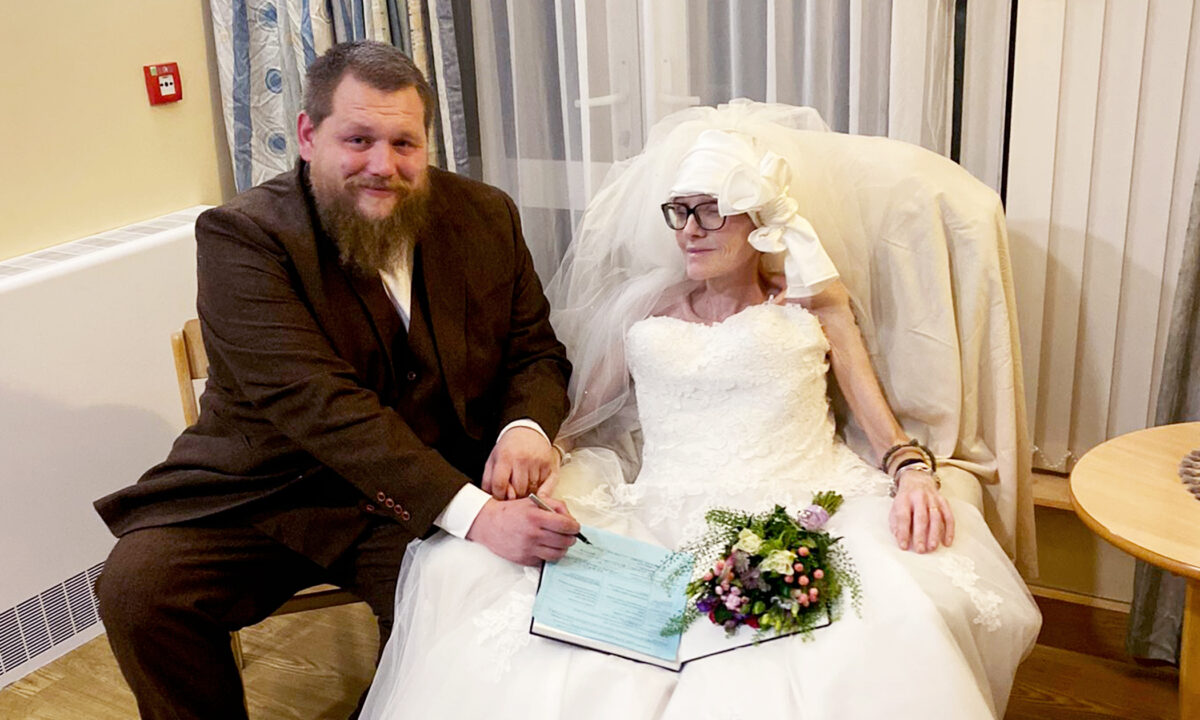 Heartbroken with his wife losing her battle with breast cancer, a man wed the love of his life in a swift, beautiful ceremony in her room at the hospice and she passed away just two days later.

“I love the wedding that I had. It was really special,” Ben told The Epoch Times of the special day. “I was babbling, trying to say sorry for a lot of things.

“I was worried the kids were going to be really disappointed that this big wedding they’d been planning with their mom for weeks and weeks and weeks wasn’t going to happen,” he reflected, “[but] they were just happy that we got married.”

Ben is a stepfather to Jen’s two sons, aged 15 and 12, and the couple shares three daughters, aged 9, 8, and 5. Their nuptials were expedited when Jen’s condition worsened, but their day was special indeed, with stories, champagne, tears, and even a hand massage for the bride.

Ben shared a photo on Twitter, captioned, “I finally married the love of my life.

“I’m heartbroken that this marriage will be counted in days, not years,” he added. “Don’t put things off, tell the people you love that you love them now.”

Two days after the special ceremony, Ben received a call that his beautiful wife was approaching the end.

Unaware of how many hours he would have with Jen, Ben went into the hospice to spend time with her.

“I just sat with her and read my book, or talked to her instead of things I wanted to say,” he recalled. “She got quiet.”

That night, Ben kept an eye on Jen as she was really sick. At about 2 a.m., Jen was almost going to fall from the bed when Ben and a few nurses helped her to settle back in the bed.

Ben then held her hand, and a nurse sat and held his hand.

“I made a stupid joke, because the TV had been on all night,” he remembered. “The last thing she heard was, ‘All of your kids love you,’ and she was gone.”

“It feels strange to share this news whilst so many congratulations for the wedding are still coming in. Jen passed away peacefully this morning,” he wrote. “Thank you for the support, it helped me through a long night.”

Their love story began when they first met at university. Ben was a geology graduate, and Jen was a former forensic scientist. However, they both wanted to retrain as maths teachers.

“She walked in the room on the first day: beautiful,” Ben recalled the first time he saw Jen. “I thought I’d give her a big cheesy grin … she smiled back.

“I didn’t ever think we’d get together,” he conceded. “She was 10 years older than me, she was absolutely stunning; as far as I was aware, she had a happy life, married life, children, but I just knew that I wanted to be with her, be near her, be her friend.”

At the end of their first year of study, Jen separated from her husband. The next semester, Ben summoned up the courage to ask Jen to lunch. They shared their first kiss, and were “pretty much inseparable” from then onwards.

As Ben got to know Jen more, he found her to be a warm, open person who was happy to help anyone in life, even if that meant they knew her for just two weeks. Anything the kids wanted, she didn’t find it impossible to get, Ben said.

“I started falling in love with her just listening to the way she talked about her students and how much she cared about them,” Ben added. “Those children who had the worst problems opened up to her. She always inspired me to do that better, myself.”

On the anniversary of their first date, Sept. 28, 11 years ago, Ben got his first pay check as a teacher and popped the important question, and Jen said yes.

However, in 2013, Jen’s battle with breast cancer began.

After beating the disease, she was told things were “looking good,” said Ben. The couple even celebrated five years cancer-free in 2019 with a beautiful dinner made by Jen, an enthusiastic cook. However, shortly after Christmas that year, Jen found a lump in her armpit.

“While it was classed as secondary breast cancer, we were told that she wasn’t going to get better,” said Ben. “Life, sort of … carried on. We locked down pretty soon after that, which she loved, as hard as it was.”

Lockdown was a chance for Jen to enjoy family time, said Ben, although she kept the severity of her sickness a secret from their children, despite Ben’s protestations.

After a peaceful summer, Jen fell ill with crippling stomach pains and fluid on the liver. At this time, Jen’s chemotherapy had come to an end. Each day, Jen began to get weaker and weaker and she was unable to eat or drink anything without being sick.

The doctors said at this time that she didn’t have a lot of time left.

“A friend of ours worked at the hospital and had a quiet word in someone’s ear, and said, ‘Look, can you just give us an insight into how long we’re looking at?'” Ben recalled. “They said, ‘We’re looking at days.'”

Jen was then moved into hospice care, where plans for the nuptials took place.

Ben broke the news to the couple’s kids. Friends rallied round, as did the boys’ biological father, with whom they have a good relationship. But Ben couldn’t settle.

“I was angry with her because she put off so much,” he admitted. “We’d had close friends suggest memory boxes or writing letters for the kids; she always thought she had more time, and I think I realized very late how much denial she was in.”

Jen, Ben says, didn’t really have any big conversation before her passing but just wanted to keep things going with the kids.

“The kids were her world,” he continued. “You kind of want to believe God’s got a plan. It’s a hard one to see, at the moment. But sometimes you do think … when things are seeming to work out, and we’re getting into a routine, the kids went to school, and I’m feeling myself step up to be more of a dad than I was before …

“You think maybe things do happen for a reason.”

Ben has also begun journaling about his experience, hoping to have something in a year’s time. He wants to “share the story a little bit more with the people who’ve invested in it, and sort of say, ‘Look, this is how we went,'” he explained.

“If I could write down my late night ramblings to better help people, I want to try and do that,” he said. 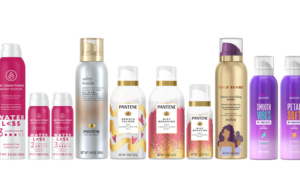 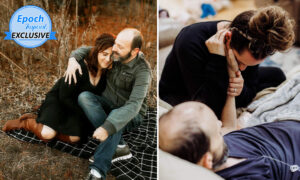 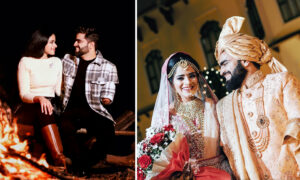 PeopleBy Louise Bevan
Man Without Arms and His Soulmate Ignore Social Stigma, Get Married After 6 Years Together
12-17-2021
sharecomments 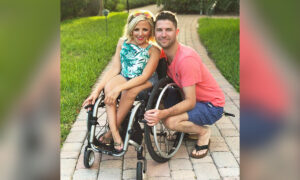