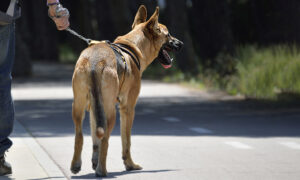 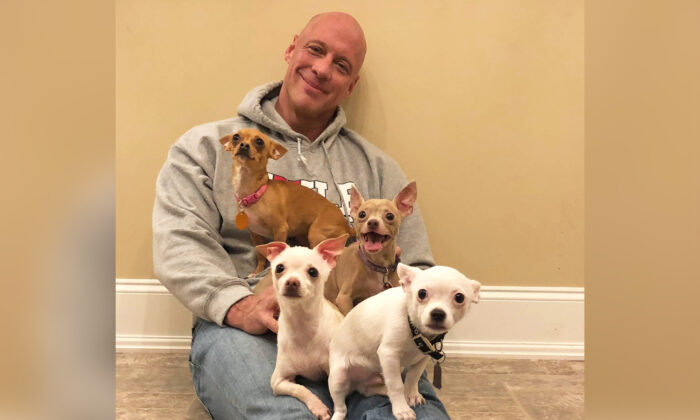 Bobby Humphreys, a former bodybuilder, liked big dogs. Rottweilers, to be precise. But after a 17-year-long marriage came to a devastating, abrupt end, it was a tiny dog that came to the rescue from the jaws of depression.

Bobby, from Maryland, struggled to cope after his marriage dissolved, but a dear friend rushed to help with a diminutive sidekick in tow. “My friend, Connie, had shown me what friendship really meant,” Bobby said, according to IHeartDogs. “No matter what I needed, she was there for me.”

Connie’s son had a Chihuahua named Lady, whom Bobby had never warmed to. “She didn’t really like people,” Bobby said. “Especially men.” However, one day, Connie was moving houses and needed a favor. Bobby owed her, and he knew it.

The big-dog lover somewhat reluctantly agreed to take Lady in and hoped for mutual civility at best. However, Lady shocked her incredulous dog-sitter by making a beeline for Bobby’s lap. “This dog hates everybody,” Bobby joked. “Lady and I have been literally inseparable ever since.”

As time went on, Bobby’s struggle to adjust to single life endured, but the 7-pound (approx. 3-kilogram) pup had stolen his heart. He set out on a quest to find his own “Lady.”

His search was fruitful, and it wasn’t long before Bobby found a brown and tan dog named Kira. She was rehomed from squalid conditions, traumatized, and was untrained and undisciplined. However, Bobby agreed to take her in, hoping that the little dog would adjust, much like he was having to do. The sense of solidarity between man and dog had never been stronger, and Bobby’s empathy was increasing exponentially.

As Bobby drove home, the little dog snuggled up to him.

Bobby’s next pup, Harley, was part of an altogether different story. Discovering her on Puppy Finder, Bobby was told that Harley was from an unexpected litter. However, he was soon privy to the truth: Harley was the product of intentional inbreeding. “I started to see a pattern,” Bobby shared. “So many of these little beautiful babies are being abused or taken advantage of and I just couldn’t sit by and watch it happen.”

He returned to adopt Harley’s sister, Quinn, the very next day.

From there, the adoptions snowballed. Lucy followed her guardian seemingly desperate to rehome her. Lucy had been found lost near a trailer park, and her previous owners had shooed her away, claiming, “I don’t want that thing, I’m done with it!” Information from neighbors and an emergency vet suggested that Lucy had been used as bait to train fighting dogs.

Lucy was injured and terrified.

One day, she bolted and ran away down a busy, unlit highway. “When I got within 5 feet of her she collapsed,” Bobby recalled, “curled up into a ball and buried her head between her legs. It was at that moment I understood what a bait dog was.”

“I froze,” he continued. “I held her so tight. The only thing this poor girl knows is survival.”

Lucy, like the rescued pups before her, had given her heartbroken owner a new lease of life and a cause worth fighting for.

Since that moment, the project in Boonsboro, Maryland, has grown. “We rescue Chihuahuas who are living horrible lives,” Bobby explained. “We give them either a furever home with us. … or we nurse them back to health and adopt them out!” It may not be lucrative, but it certainly is fulfilling.

Bobby has rescued over 50 puppies since opening Big Guy, Little World Sanctuary. “I have an incredible relationship with a local animal control who is in charge of my kennel license and they adore what I do,” Bobby told Jam Press, The Daily Mail reported. “[T]hey just simply asked to take some of the pressure off of them because of my social media status.”

Bobby reveals that when the sanctuary first began, he was the only one who was taking care of these puppies with a little support from Connie. However, now there are five full-time staff members, including two that live there full-time. Their day starts at 7:30 a.m. and only completes at 9 p.m.

“We have tried to develop systems for everything to make it both efficient and comfortable for the dogs,” Bobby said.

Bobby, who had a successful hardwood flooring business but left it behind to pursue his mission to save these puppies, admits that he was really nervous about what people would think of him.

“Would they think I am the male version of the crazy cat lady? Would they think I’ve gone completely insane?” Bobby said. However, contrary to what he expected, every near and dear person was supportive of his decision.

“To see my mother’s face when she told me when she was so proud of what I was doing is a moment I’ll cherish always,” he said.

As for what the future holds, Bobby has some really big plans, such as developing a prototype for a new sanctuary so that he can start setting it up in areas across the country to help handle the epidemics. Additionally, he also plans to get into the dog food industry and make some changes.

“The way that dogs are treated in the world, is nowhere near as good as it should be,” Bobby said.

Bobby chronicles his adventures on the Facebook page Big Guy, Littles World Sanctuary. It really seems like an army of tiny dogs and a man on a mission.