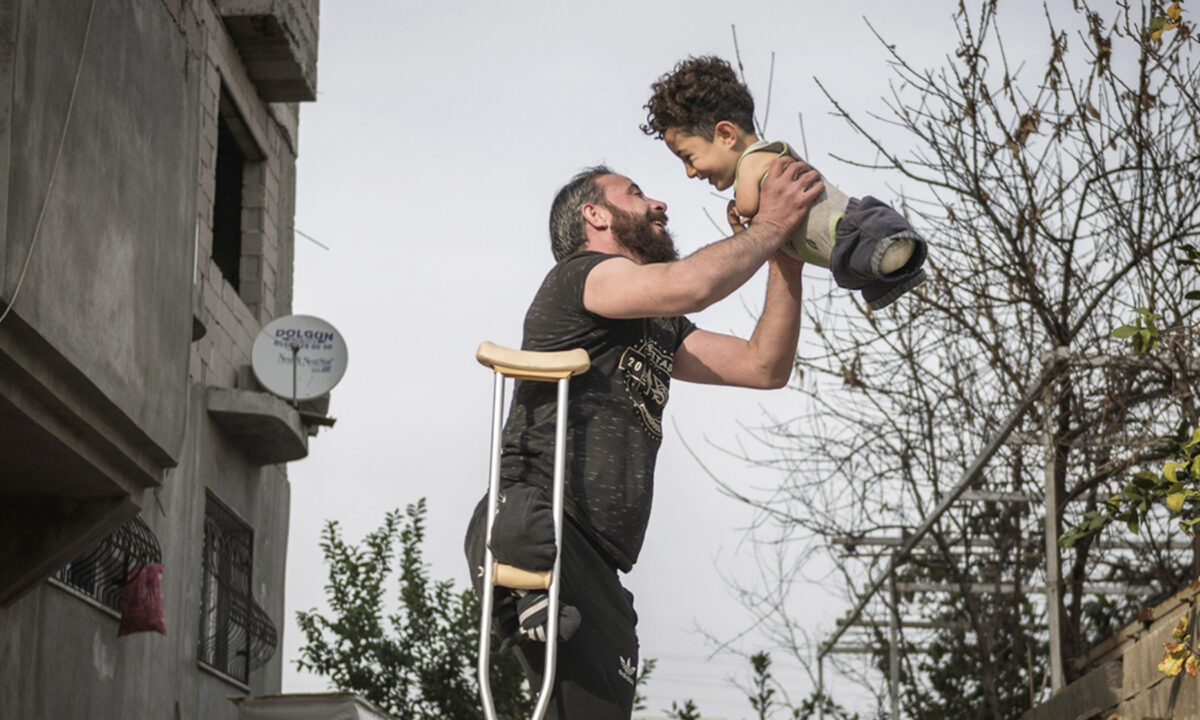 There are many Syrian refugees who have been 'affected by chemical gas,' used in the war, says the photographer
BY Louise Chambers TIMEAugust 8, 2022 PRINT

After befriending a Syrian war refugee family living in his hometown of Hatay, Turkey, a photographer planned a life-changing photoshoot with the father and son, both of whom have lost limbs in the ongoing war. One photo turned out so powerful that it won an award and got the family the help they needed and deserved.

“Baba Munzir lost his right leg due to the impact of a bomb explosion [in 2015] in Idlib, Syria. His wife, who was pregnant at that time, inhaled the expelled sarin nerve gas,” Aslan told The Epoch Times.

The couple was rushed to Turkey for treatment, Aslan said, but tragically, unborn baby Mustafa wasn’t spared of the ill-impacts; he developed a very rare condition called the tetra-amelia syndrome, because of the sarin gas and medication his mother took for inhalation sickness. Mustafa “opened his eyes to the world without any limbs,” said Aslan.

Moved by their story, Aslan contacted the family in the days that followed. While listening to their life stories, Aslan thought of translating their life experiences into some memorable photographs.

“I went to their house in the Reyhanlı district of Hatay,” Aslan said. “I spent time with the family. We ate together and chatted a lot.”

After meeting Mustafa, Aslan described the then-5-year-old child as “a lively boy who always smiles, even though he has no limbs.” Munzir, while pessimistic as a result of the trauma he has suffered, remains hopeful of surviving with his family. Aslan invited the pair to take part in a photo shoot.

“While we started shooting, there were places where we laughed, but there were also moments when I was emotionally worn out,” Aslan recalled.

The photographer recalls Munzir’s strong communication with his son, as well as an immense sensitivity that also translated to his wife and other children. The father and son’s happiness is plain to see, said Aslan, adding that young Mustafa, who has learned from his father’s example, has “accepted his situation and can deal with it very well.”

And during the photo shoot, a new selfless ambition was born.

Aslan wanted to highlight the tragedy of the ongoing war in Syria, which started in 2011. He wanted to celebrate Munzir and Mustafa’s close bond, but he also wanted to help fund an electronic prosthesis that would change the little boy’s life. “This prosthesis is quite expensive and is not available in Turkey,” he explained. “It can only be obtained from abroad.”

Aslan started a fundraiser. When one of his photos, “Hardship of Life,” went viral, so did the cause.

Aslan was awarded the 2021 Photo of the Year at the Siena International Photography Awards for this moving work. Besides Aslan’s prize, award officials had something in store for his photo subjects. The Siena Awards started a GoFundMe campaign to raise vital funds for the deserving family, and with their visibility and international reach, far surpassed Aslan’s solo efforts.

“Italy took over the treatment of the family,” Aslan said. “Recently, the family went to Italy for treatment … this situation affected me deeply, and I hope we will have the opportunity to help other children with this award.”

According to the fundraising post, the officials updated on July 15 that the family are still in Siena waiting to relocate to Budrio where their prosthetic treatments will begin. The post said the family are awaiting the birth of Mustafa’s baby sister before they can move to the Vigorso di Budrio Center for the treatment.

The family remain in touch with Aslan.

A veterinarian by profession, Aslan has been taking photos since 2006, and started out with an interest in street photography before moving through different styles. Today, he prefers to take photos of people and places, and the impression left by photo subjects such as Munzir and Mustafa will last a lifetime.

“There were many Syrian refugees, and many children like Mustafa, who were affected by chemical gas and born this way,” he reflected. “War is a bad situation for the whole world, but women and children are the most affected.

“I hope we can join hands for a better world.”