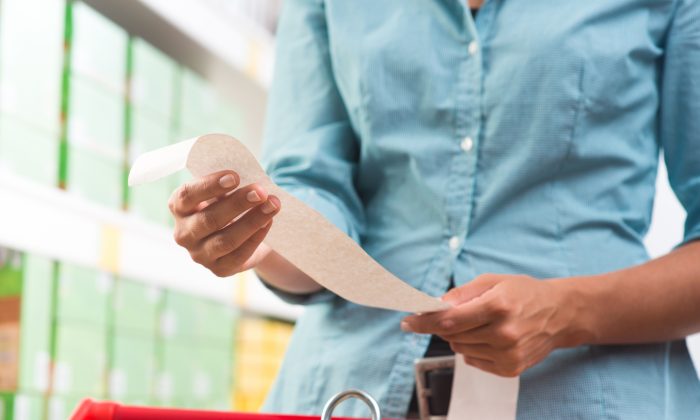 A new study looks at how much Bisphenol A (BPA) we absorb and ingest when handling receipts. Researchers found that use of hand sanitizer only made things worse.

Over the past few years, several manufacturers have removed BPA from their products, but we still use a lot. BPA remains one of the highest volume chemicals in commerce, with 15 billion pounds produced each year. BPA is an important ingredient for plastics, but it also has hormone-like properties which have been shown to cause reproductive defects. Animal studies reveal metabolic and immune problems associated with exposure.

Choosing BPA-free products can reduce exposure, but one source is hard to avoid. BPA serves as a heat activated developer on thermal receipt paper used in most stores, restaurants, and ATMs.

A layer of BPA powder coats these receipts to allow for inkless printing, but regulators believe we don’t pick up enough of this powder to pose any concern. However, a study published online in PLOS ONE on Oct. 22 found that people are getting more from their receipts than they realize.

Researchers from the University of Missouri observed how consumers handled their receipts in a local food court, and then duplicated these behaviors in the lab to measure BPA intake. In general, the longer people held their receipts the more BPA they absorbed, but other behaviors increased exposure dramatically. Those who ate a French fry after handling their receipt showed significant amounts of BPA ingestion.

Another reliable method for raising the body’s BPA levels was using a hand sanitizer before handling a receipt.

According to lead study author Annette Hormann, many skin care products contain mixtures of dermal penetration enhancing chemicals that can increase absorption of fat friendly compounds such as BPA as much as 100 times.

Hormann says to understand this phenomenon you have to consider the stratum corneum—a skin membrane which serves as the body’s first line of defense against environmental hazards, such as infection, dehydration, or harmful chemicals.

When applying soaps and lotions to this protective barrier, timing is everything.

“You don’t want to change the surface of the barrier any time you come in contact with a virus, bacteria, microbes, or anything that could hurt you that way,” Hormann said. “If you don’t understand how that barrier works, you could be doing more harm than good.”

There is big debate about just how dangerous BPA is. Scientists agree that nearly everyone has a measurable quantity of the chemical floating in their system, but there is little consensus about how much harm it actually causes. Industry studies have found no problems, while 90 percent of independent tests find harmful health effects.

Hormann brings a unique perspective to the debate. She is not only a university researcher, but also a regulator affairs senior specialist for the world’s largest orthopedics manufacturer.

Hormann says her rigor for regulations is important because her goal is to get regulators and industry to listen.

Hormann says the other problem with BPA from an industry perspective is the subtlety of its action. Unlike a typical poison that is clearly toxic at a given threshold, BPA acts much more slowly, and results can vary from one person to another. BPA is what is known as an endocrine disrupting chemical, because it can upset the body’s hormonal balance, triggering a wide range of issues, from diabetes to thyroid disease to obesity.

Many chemicals are thought to cause endocrine disruption: pharmaceuticals, dioxins, polychlorinated biphenyls, DDT and other pesticides. The hormone influencing properties of BPA have been known at least since the 1930s, when it was prescribed as a synthetic estrogen replacement.

The influence of endocrine disrupters goes unnoticed until it hits what scientists call the tipping point—where problems finally manifest. This tipping point can take years or even generations to emerge. One notable example is Diethylstilbestrol (DES). In the 1950s and 1960s doctors recommend this synthetic estrogen as a strategy to prevent pregnancy complications or miscarriage. Doctors discouraged use in the 1970s when it was discovered that children born from mothers who took the drug exhibited sterility and other reproductive problems.

Federal regulators say BPA exposure from receipts present no cause for concern, but some believe there is reason to worry. In 2011, Connecticut became the first state to ban BPA-laden receipt paper. Some paper manufacturers have switched their print developer to Bisphenol-S (BPS) amid concerns, but researchers have found BPS to be just as problematic.

Hormann recently received a letter from one receipt paper manufacturer using a vitamin C powder as an alternative print developer. Until that becomes the standard, she cautions people to limit contact with receipts as much as possible (no more than three seconds), or ask for e-receipts. Most important, be mindful of the stratum corneum, and avoid touching receipts with wet hands or sweaty palms.

Cashiers are at greatest risk of exposure, and company policy can compound the problem. One national big-box store chain places a sanitizer dispenser next to every cash register.

If you do handle receipts under less than ideal conditions, Hormann suggests brushing hands on a cotton surface, such as a towel or clothing. “Every time I touch them, I just run my hand across my blue jeans,” she said. In her previous study, she found that pesticides would cling to cotton, and she suspects BPA acts similarly.

“The best thing to do is to write the legislators and tell them to please get this off the market, because we really can’t worry about touching receipt paper.” Hormann said.