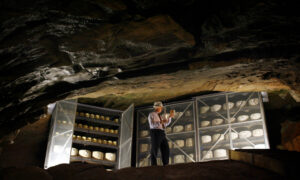 Cheddar From Cheddar: Meet the Cheesemaking Couple Who Brought a World-Famous Cheese Back to Its Home
0
Share Now
TelegramFacebookTweetEmailTellMeWeReddit
Copy Link 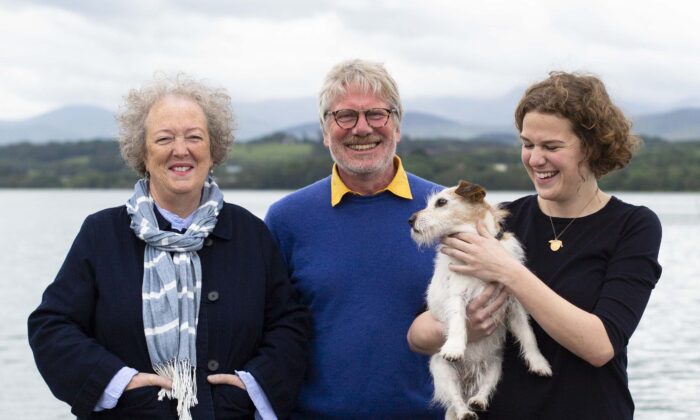 (Left to Right) Alison, David, and Jess Lea-Wilson, the family behind Halen Mon. Halen Môn (Welsh for "Anglesey sea salt") is collected from the Menai Strait, a thin ribbon of sea between Wales and the tiny island of Anglesey. (Haarala Hamilton/Courtesy of Halen Mon)
Food & Dining

Halen Môn: The Art and Science of Harvesting Sea Salt

From the pristine waters off the coast of Anglesey, Wales, Halen Môn gathers and hand-harvests award-winning artisanal salts
By Xenia Taliotis

“Salt is the most powerful flavor enhancer in any cook’s tool kit,” Jess Lea-Wilson said. “To use it only to make food more salty is to do it a huge disservice. Used correctly—and sparingly—it draws out and complements the other ingredients, awakening their sweetness, savoriness, or spice.”

Lea-Wilson is brand manager at Halen Môn, the award-winning sea-salt producer on Anglesey, a tiny island that’s separated from mainland Wales by a thin ribbon of the sea called the Menai Strait. She was still a child when her parents, Alison and David, started their business in 1997. But she can still remember those experimental early days, when saucepans of seawater from the strait would be bubbling on the kitchen stove, waiting for an alchemical miracle that would produce glistening crystals of pure salt.

“It was very hit and miss,” she said. “Sometimes, the result was something with terrific mouthfeel and crunch, but an unappealing appearance, and at other times, they’d end up with beautiful flakes that failed the taste test.”

A quality salt, she explained, adds more than just taste.

“It can tantalize the senses with texture, color, and even sound—a satisfying crunch—heightening the dining experience in a way that refined salt—typically mined from underground deposits and put through mineral-stripping processing—never could,” Lea-Wilson said.

The Lea-Wilsons persevered. They invested in some equipment and eventually came up with a methodology and formula that worked so well that they were able to produce enough Halen Môn to take to a trade show in London. This got them their first big sale—ironically from a butcher who happened to live on Anglesey—which was followed by national orders from some of the UK’s leading stores, including Fortnum & Mason, and by praise from renowned chefs and food writers, such as Heston Blumenthal and Jamie Oliver.

Orders came in from the United States and more than 20 other countries, and food producers contacted them wanting to use their salt in products from potato chips to chocolate-covered caramels. In 2014, Halen Môn became the first product in Wales to be awarded Protected Designation of Origin status by the European Commission.

From Sea to Pantry

But what was it that led her parents to start the business?

“They had an aquarium, which was so seasonal that keeping staff on throughout the year was tricky,” Lea-Wilson said. “They wanted to provide year-round employment, so they had a think about what they could do. They knew the waters of the Menai Strait were perfect for salt production. There is a huge mussel bed in the Strait with each mollusk filtering five liters [a little more than one gallon] of water every hour, so it’s very clean.”

The Lea-Wilsons’ timing was good. They launched as public awareness of sustainability and provenance was growing. There was a desire to know where food came from, how it was made, and whether its production had a negative impact on the environment.

There was also the fact that doctors were urging people to reduce their salt consumption—which the couple saw as a help rather than a hindrance. Small doses of salt are essential to our survival—all our muscles need it to function—but too much can lead to heart disease.

“My parents had seen how people often traded up when they cut down on something, be that chocolate or wine or clothes, and hoped the same would happen with salt,” Lea-Wilson said. “They felt foodies might eschew the refined variety for quality sea salt that had valuable trace elements such as zinc, selenium, and iodine. And they were right.”

Their production process has barely changed since the beginning.

“Every day, my dad goes into the Strait with his refractometer to assess whether there is enough salt in the sea to start pumping. Once we have drawn enough, we evaporate it in a vacuum so that it boils at 80 degrees Celsius [176 degrees Fahrenheit]. As the salt forms, it drops to the bottom of the containers. We then use a shovel to lift this out of the brine and transfer it to crystallization tanks, which go into a drying chamber. About 24 hours or so later, our beautiful, shiny crystals are ready to be packed by hand.”

Essentially, Lea-Wilson explained, they use extraction methods that aren’t far removed from those used by early humans to collect salt from the sea, but with modern equipment, such as the vacuum and drying chambers, incorporated into the process to boost efficiency. “And we’ve swapped wooden shovels for steel ones,” she said.

It sounds like a simple enough process, but, as Lea-Wilson pointed out, “salt comes from a living source, so we are at the mercy of nature. Producing a consistent product that looks and tastes the same each time is impossible. Of course, the difference in taste between batches is too tiny to be detectable, but each one is unique, and that’s its beauty.”

A Symphony of Success

Today, Halen Môn continues to thrive, constantly evolving and diversifying. Over the years, they’ve created new salt blends, including Tahitian vanilla, a beautiful pairing for lobster, scallops, and white fish, and a prize-winning oak-smoked variety, described by the judges of the 2019 Great Taste Awards as “the most wonderful sea salt, with subtle notes of smokiness and a rich umami.” In 2019, Lea-Wilson and her parents wrote a book, “Do Sea Salt, the Magic of Seasoning,” and opened a café on the banks of the Menai Strait.

“Salt is immensely versatile, and complements sweet foods as well as it does savory ones,” Lea-Wilson said. “I think that the difference between a good cook and an excellent one is how they use seasoning.”

She recommends seasoning throughout the cooking process, rather than waiting until the food is on the plate.

“My advice is to add it in stages to build flavor incrementally. You can sprinkle it on food as part of your prep, then as it’s cooking, and finally as a flourish at the end,” Lea-Wilson said.

“Too much or too little can ruin a dish, but if you get the balance right, you can create a perfectly orchestrated symphony of flavors, with each pinch of this or that bringing out the best in all the ingredients.”