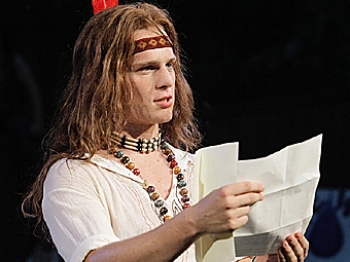 Jonathan Groff as Claude, the teen who receives his draft notice for the Vietnam War, in “Hair.” (Michal Daniel)
Arts & Culture

By Judd Hollander
Print
NEW YORK—Becoming a sort of touchtone for a generation in turmoil, the musical "Hair" (book and lyrics by Gerome Ragni and James Rado, music by Galt MacDermot) exploded off-Broadway and into the national consciousness 41 years ago. It is now being presented by the Public Theater, this time as part of their free "Shakespeare in the Park" series.

There is much to like about the show, from the costumes to the superlative score to the wonderful cast. Yet through it all, the work is missing an essential ingredient to make it really come alive.

The subtitle of the shows is "The American Tribal Love-Rock Musical," which is a pretty accurate description. (It's a tale about a group of flower children, circa 1968, in New York City.) These aren't kids who spend all their time protesting, though there is some of that. By and large, these are souls who just want to "do their own thing" and if that includes "tuning in, turning off, and dropping out," so be it.

This tribal mentality is also present in the score. Containing nearly 40 tunes, some lasting barely a minute, they all serve to highlight both the individual and communal makeup of the tribe as its members express their rage, anger, hopes, desires, and dreams.

However this "live and let live" attitude only goes so far, especially when another reality intrudes into the picture. In this case, Claude (Jonathan Groff), a teenager from Queens, New York (though he prefers to think of himself as from Manchester, England, complete with accent), receives his draft notice. While others in the tribe are happily burning their draft cards and refusing to fight in a conflict they consider unjust (Vietnam), Claude finds he cannot do the same. He quite obviously doesn't want to go, but feels he has no choice in the matter. He spurns the chance to escape to Canada.

What follows for Claude is the classic tale of the individual crushed by the weight of the system. Another message present in the story is that while the older generation (as represented by Megan Lawrence and Andrew Kober) may have not have figured everything out, the younger generation certainly hasn't either. Each group also sees only what they want to see, pretty much rejecting everything else—as a scene at an army induction center illustrates.

In many ways, the plot of "Hair" has always been secondary to the overall feeling of the musical and the era that spawned it. Unfortunately, here one gets the impression of watching an enjoyable museum piece rather than something that allows you to be a part of the story (at least not until the very end of the evening). Instead, there's always a bit of a barrier between the show and the audience, preventing spectators from experiencing the full effect of the work. Granted, "Hair" is a period piece (and staged here as such), but there's not enough of an overall emotional effect to really make it come together.

Much of this problem can be traced to Diane Paulus's direction. She keeps the story moving smoothly and the piece quite energetic. However the focus is so much on creating this special world, there is no door or window one can step through and be in synch with what's on stage. This, in turn, blunts the overall impact and effectiveness of the piece.

Casting is excellent down the line. All the actors are worthy of specific mention, with leading roles including Groff, Will Swenson as the somewhat hedonistic Berger, Darius Nichols as the always-angry Hud, and Bryce Ryness as Woof—who has a fondness for Mick Jagger, among other things. (The show also has a subplot involving Burger, Claude, and Sheila—a wonderful Caren Lyn Manuel—the girl caught between both men.)

The score is a real treat, with each tune being a gem. These include the more well-known songs such as "Aquarius," "Let the Sun Shine In," and "Good Morning Starshine," along with the prophetic "Air," the comic "Manchester England," the angry and hard-rocking "Ain't Got No," the beautiful ballad "Easy to Be Hard," and the title tune.

Musical standouts among the company include Patina Renea Miller in "Aquarius" and Manuel in "Easy to be Hard." Rivaling "Easy to Be Hard" in terms of angst is Groff singing the anguish-laden "Where Do I Go," as he realizes it's just not in him to burn his draft card and walk away.

Michael McDonald's costumes are wonderful, nicely capturing the flavor of this not-so-long-ago era without falling into parody or caricature—both of which are completely absent from the production. Hairstyles and makeup were also very good.

With regard to Scott Pask's set (basically a field of grass with a few props), this is not a situation where "less is more." While it does serve to give the musical a bit of a timeless quality, it's at odds with the costumes and hairstyles (and the book), all of which place the show in a specific place and time. Using a more detailed set to reflect this would have made the overall effect work better. Lighting by Michael Chybowski was quite good, as was the sound design Acme Sound Partners.

This production of "Hair" hits all the right notes, from casting to costumes, and is definitely a show worth seeing. However, for all it has to offer (and it has a lot), the experience feels a bit too much by the numbers to make it the definitive version for the ages.

Judd Hollander is the New York correspondent for the London publication, The Stage.