Group of Dancers Blown Away by Shen Yun 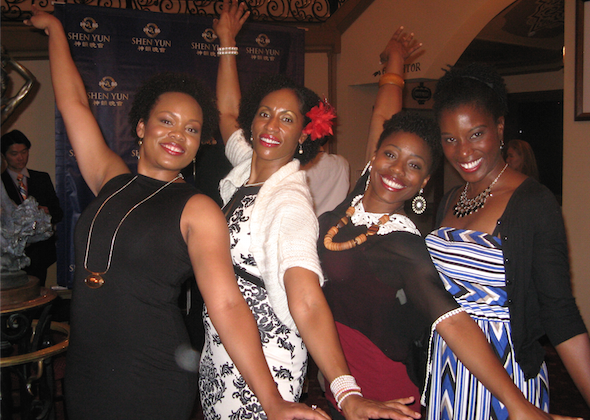 SANTA BARBARA, Calif.—A group of dancers from the dance group Movement of Agape were awed and inspired by Shen Yun Performing Arts at the Granada Theater, March 29.

Movement of Agape is a dance ministry that encourages the development of community and spirit through the arts.

Mecca Umazar, an accountant in addition to being a dancer with Movement of Agape, had many good things to say about the performance. “It was inspiring, it was magnificent, it was beautiful,” she said. “Just the beauty is what most inspired me. It was so beautiful.”

Shen Yun combines classical Chinese dance and music to bring to life China’s thousands of years of culture. “Through the universal language of music and dance, Shen Yun weaves a wondrous tapestry of heavenly realms, ancient legends, and modern heroic tales, taking you on a journey through 5,000 years of Chinese culture. Its stunning beauty and tremendous energy leave audiences uplifted and inspired,” the Shen Yun website states.

Phoenix Brown, a professional dancer and also a writer and illustrator who promotes children’s education, was quite taken with the dance.

“The technique was unbelievable,” she said about the dance. “The entire show, we all would comment on a develope that would go up by the ear, a ponche that was on the neck, a battement that was sky-high,” she said, mentioning specific dance moves that had impressed her and her friends.

Leslie Marrero, who is an assistant at Disney Imagineering in addition to being a dancer with Movement of Agape, agreed that the dancers were extraordinary. “That the guy who did the split leap, the front split switch, honestly, he needs to be fired because that was so amazing. No one can do that,” she said.

“It really is phenomenal,” Ms. Brow said. “At the end of the show, I’m thinking we’re clapping, we’re standing up, the dancers are going to come out and bow, and then we get someone doing five toe-touches in a row, we get five pirouettes. The show is still going!”

One dance that stood out for Ms. Brown was Mongolian Chopsticks, an all-male dance in which bundles of chopsticks are used as props, adding a rhythmic element to the dance.

“That was fantastic,” she said of Mongolian Chopsticks. “It was phenomenal—the rhythm, the energy, the staccato, the tranquility, and the harmony. I felt like certain elements just came together to—like Mecca said—to bring that grace out, and the poise. And the dancers are just phenomenal.”

Ms. Brown also felt that there was more to the dance than met the eye. “And you can tell that they work, and not just on a human plane, but they really cultivate the spiritual aspect. It is unbelievable,” she said.

China’s traditional culture is deeply spiritual, and the Shen Yun performers are not only showing Chinese culture on the stage, but living it, as well. “Today, Shen Yun’s artists—dancers, musicians, choreographers, composers, and the entire team—follow this noble tradition,” the Shen Yun website states.

“For them, this spiritual connection is motivation for striving to excel, is the heart behind each movement of the dancer and each note of the musician. It is why audiences can feel there is something different about Shen Yun. Their source of inspiration, rooted in traditional Chinese culture, is the spiritual discipline known as Falun Dafa,” according to the website.

This side of the dance also stood out for Ms. Marrero. “One thing that really resonated within me was a level of respect for the balance that they had between strength, focus, and discipline, and being able to do the delicate, intricate movements. You couldn’t help but have a respect,” she said of the dancers.

“And you also knew that without the balance of the Qi, that is, the practice [Falun Dafa], there’s no way that they could do those movements, and there is no way that it could speak to the audience in the way that it did. So I thought it was amazing,” she said.

The spiritual side of the show also touched Joy Liani Hallman, who is a choreographer and dancer, a faculty member at the Debbie Allen Dance Academy, a member of Movement of Agape, and a spiritual counselor. She is also nearing completion of a doctorate in education and counseling psychology.

“The movement transcended life, just the qualities that burned through primarily were perseverance and unconditional love beyond an appearance, and to do it anyway. To just really follow through, and to do everything through forgiveness, forbearance, compassion,” she said. “It was there, it was perfect, it was superb.”

Ms. Hallman saw the performance as a healing experience.

“If there is anyone who is ever going through anything, any type of crisis or possibly any period of self-doubt or not-knowingness, any type of unawareness, when you come to see a show like this, it makes you think. It makes you know there is a thinker beyond the thoughts,” she said. “You get to say ‘yes,’ and just become more and more of your whole self. It’s amazing.”

Another dance piece that touched the group was about modern China and the tribulations that Chinese culture is facing today. The Steadfast Lotus is a tale of a mother and daughter who practice Falun Dafa, a spiritual discipline that has been persecuted by Chinese communist regimes from 1999 to the present.

The piece especially touched Ms. Umazar, who herself practices Falun Dafa. “The vignette with the mother and daughter practicing in the park [The Steadfast Lotus] was such a powerful story. It was so inspiring—the resiliency of the whole story of the practitioners of Falun Dafa. It was beautiful,” she said.

Supporting each dance piece is the Shen Yun Orchestra, which is unique in its combination of Eastern and Western instrumentation.

Also supporting each dance are digital backdrops, which “are magical windows to completely different realms,” the Shen Yun website states. “From vast open grasslands in one dance to the stately elegance of Tang Dynasty pavilions in another; from dusty yellow battlegrounds to tropical beaches to Himalayan peaks to picturesque scenery of the Yellow River Delta—the digital projection infinitely expands and transforms the stage.”

“It was absolutely incredible,” Ms. Marrero said of the backdrops. “It was great to see the graphic design mixed with art. That’s something that we don’t have a lot here in America, so it was a really nice touch and a nice surprise, and I thought it was used really, really well.” All the others concurred.

The show as a whole deeply touched the group of friends, who cheered throughout the performance. “It was unbelievable, unparalleled, and we will definitely be back,” Ms. Brown said.