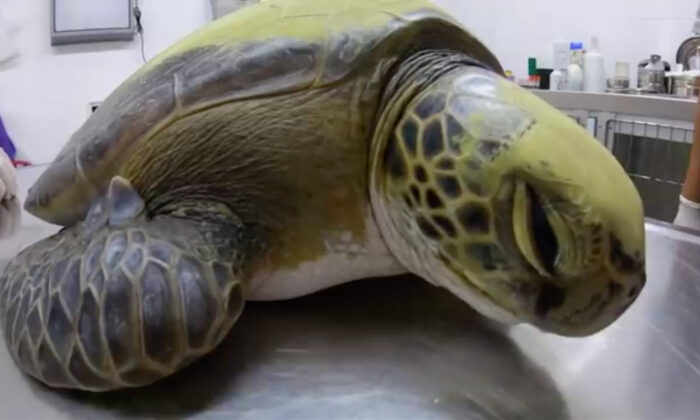 The world is slowly but surely becoming aware of the enormous threat that plastic pollution poses to our oceans. But while the problem can often seem abstract, a green sea turtle rescued in Argentina that defecated over 13 grams (approx. half an ounce) of plastic trash helped make the dangers very clear.

After being caught up in a fisherman’s net off the coast of San Clemente del Tuyú at the end of 2019, the green turtle (Chelonia mydas) was taken to the Mundo Marino Foundation, a local wildlife refuge.

The turtle was examined by the marine vets for possible injuries or illnesses. What veterinarian Ignacio Peña found on the X-rays was shocking. “[W]e could see foreign bodies inside,” he explained in a press release. Putting the turtle on a laxative medication, the vets observed as it proceeded to expel pieces of plastic trash, including bits of bags and pieces of hard plastic.

Thankfully, the local fisherman whose net the green turtle accidentally got caught in, Roberto Ubieta, had been trained by the Mundo Marino Foundation on what to do in this situation. He was the one who brought the plastic-filled creature to the refuge for treatment.

Having seen turtles with sizeable quantities of trash in their stomachs before, marine veterinarian Peña knew what to do. “[W]e began a treatment with a medication that favors its peristaltic movements (movements of the digestive tract) and allows it to eliminate what we observed on the [X-ray] plates,” he said.

Shortly after arriving and receiving the laxative, the turtle began to gradually expel the trash, equivalent to about 26 straws, 4 plastic cups, or 2.5 plastic shopping bags.

“Today, the turtle is eating green leaves, mainly lettuce and seaweed,” Peña said. “We’re viewing this with an optimistic attitude, the progress is favorable.” As soon as the turtle has recovered, the foundation will release it back into the wild.

If left untreated, the accumulation of plastic inside the turtle’s systems could have been deadly. As Karina Álvarez, a scientist and conservation manager at the foundation, explained in the press release, “There is not just a risk of a mechanical obstruction due to plastic intake. The accumulation of non-nutritive elements in the digestive systems of these marine reptiles can cause a false sense of being full.”

The problem is that pieces of plastic floating in the ocean often look very similar to the adult turtle’s natural diet of seagrasses and algae. Juvenile green turtles are at even greater risk of misidentifying plastic as food since they also eat invertebrates such as crabs, jellyfish, and sea sponges.

The other issue with ingestion of plastic is that gases are released as the digestive system tries to break it down. According to Alvarez, this could “affect their ability to dive and immerse, both to feed and to find more suitable temperatures.”

In some cases, the amount of plastic can block the digestive system entirely. This was the tragic case of a dead turtle that fisherman Roberto Ubieta found in January 2019. The foundation’s autopsy revealed significant quantities of plastic trash inside the remains. Another green turtle has been taken in by the foundation and also has expelled a piece of plastic bag.

Perhaps the most saddening was the case of a baby loggerhead turtle washed up at the Gumbo Limbo Nature Center in Boca Raton, Florida. The center posted a picture of the dead turtle, “which would fit in the palm of your hand,” and 104 pieces of plastic that it had consumed on Facebook. “This is a sad reminder that we all need to do our part to keep our oceans plastic free,” they wrote.