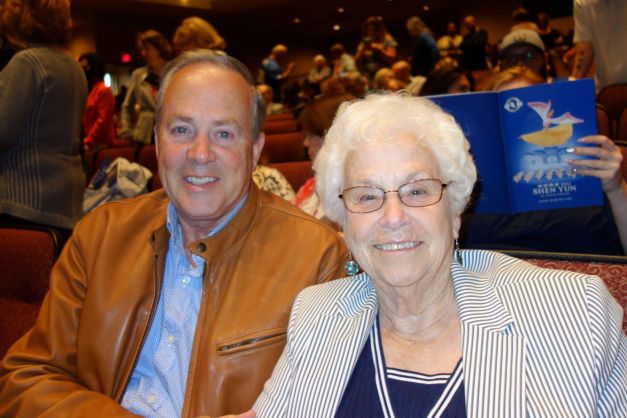 Ken Jorette and his mother Dana Rorer attended the May 7 performance of Shen Yun Performing Arts at the EKU Center for the Arts in Richmond, Ky. (Michael Huang/The Epoch Times)

RICHMOND, Ky.—Ken Jorette, the retired director of information systems for the Commonwealth of Kentucky, attended the May 7 performance of Shen Yun Performing Arts at the EKU Center for the Arts with his mother Dana Rorer.

Ms. Rorer was impressed by the cherry blossom dance, and Ken was impressed with the history behind the performance, especially before communism took over.

Regarding the New York-based company’s effort to revive Chinese traditions, Ken said, “It’s wonderful to see [a performance about Chinese traditions] in this country, and it’s just a shame that the people in China can’t see [it].”

The theme of Shen Yun this year is “China before Communism,” through which the performing arts company is trying to give global audiences a glimpse of what China was like before its culture was almost destroyed by the Communist regime.

Ken noted that the singing focused on the Creator. “Of course, we all believe in the Creator in one form or fashion. I think it’s very touching.”

A Divine Message in the Music

Scott LaFollette, a church musician, enjoyed the performance very much. He has a background in trumpet, piano, and guitar, but now sings in a church choir. For that reason, Scott appreciated the male soloist. “He’s a wonderful singer—a large voice in a small package.”

He was also amazed at how the performance sequences integrated live-action with animation. “It was surprising and very interesting to watch.”

Scott also noted how in the water dance, the dancer’s sleeves appeared to get longer. “That’s exactly what water does.” He noted the colors on stage mean different things to different people. “Blue, of course, [means] fluidity, water, and sky. Purple is sometimes considered to be the color of mystery.” He had never before thought of the different colors showing different types of energy.

Scott could feel the energy from the stage. “It comes through,” he said. “Because some of the dance moves and the acrobatics require a lot of energy. You feel a sense of that from each individual and how they coordinate together. In unison, it just makes for a wonderful spectacle.”

As a religious person, he appreciated the spiritual message. “In the divine and religion, in general, is something very individual and personal to a lot of people, so I’m happy to see this culture and their perceptions of the divine.”

For Scott, “it’s a positive message.”