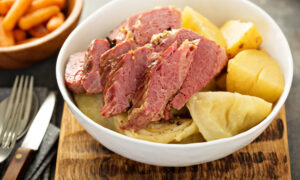 Grazin’ on Delectable Burgers, Straight From the Farm

The Hudson Valley has become the New York region’s epicenter of the farm-to-table notion, at the forefront of the craft food movement.

In Hudson township, New York, one of the most interesting places to eat is the local diner! Yes, I know, I don’t normally write about diners … usually I wax poetic about Michelin-starred restaurants.

But this is an exceptional eatery, as it is called Grazin’ and serves some of the most delectable all-beef hamburgers I have ever experienced in an organic version of traditional diner fare such as burgers, egg dishes, sandwiches, and brunch. Although it has fewer menu options compared to a conventional diner, the owners put a strong emphasis on very high-quality, local, organic, and Animal Welfare Approved (AWA) ingredients. AWA is a nonprofit organization that audits farms to ensure that livestock is protected in a rigorous set of ethical standards.

Grazin’ Angus Acres of Ghent, New York, is an organic and biodynamic farm owned by Dan and Susan Gibson, who also own the diner. The farm is the source of all the grass-fed beef, pork, and chickens served at Grazin’. The farm is also the meat source for the new Grazin’ Tribeca location in Manhattan that just opened a few days ago. The farm is a sustainable 2,000-acre eco-friendly environment with no feedlot, no fertilizers, no herbicides, no pesticides, and no hormones. The black-hued, pure-bred Angus cattle roam the grazing pastures, in a rotational manner, moving from pasture to pasture so the grass has a chance to renew after the animals have left.

Manhattanites are familiar with Grazin’ Angus Acres as meat from their cattle and eggs from their chickens have been a fixture at the Union Square Greenmarket, and other city greenmarkets, for several years. The farm is certified by AWA.

Since I was raised in Europe, I love grass-fed beef. I find it more flavorful, even though it is leaner than corn-fed, but it has a taste that’s second to none. That also holds true for the dishes made from the chickens and pigs that Dan’s farm produces. The chicken soup I had at the diner tasted like it was made from real chicken. During my farm visit I found myself face to face with a 500-pound boar called Herman, who was lording it over a harem of a number of saws.

Herman was very friendly … thankfully he didn’t know that half an hour before I had lunched at the Diner on one of his children in the form of tasty bacon that accompanied my lambburger with authentic tzatziki—the Greek yoghurt/garlic dip that is usually served with grilled meats.

Grazin’s menu reflects the AWA philosophy beyond simple sourcing. Chicken soup is made from retired egg layers, hamburger is made from older steers, and all the vegetables are sourced within 7 miles from the Grazin’ Angus Acres farm.

Talking about chickens … the farm has a number of mobile chicken coops called the “EggMobiles.”  The EggMobiles house the hundreds of free-range chickens, which roam the grounds of the farm, and the manure produced by the chickens helps to enrich the soil.

“We actually move them around, behind the cattle every day because the chickens spread the manure piles the cattle leave behind, so spreading the manure actually fertilizes the grass for us,” said Dan Gibson. “Getting grass in the chicken’s diet also means the yolks in our eggs are bright-orange and delicious.”

It is great eats!

Manos Angelakis is a well-known wine and food critic based in the New York City area. He has been certified as a Tuscan wine master, by the  Tuscan Wine Masters Academy, as well as being an expert on Greek, Chilean, and Catalan wines. He judges numerous wine competitions each year and is the senior food and wine writer for LuxuryWeb Magazine, LuxuryWeb.com.