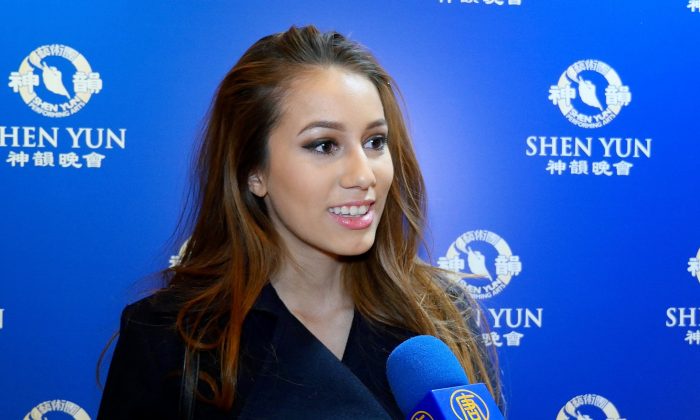 The experience was completely different from anything she’d experienced before, even though as someone who attends a performing arts high school, she’s seen a lot of shows.

“It’s a culture you don’t really see a lot, or you don’t really hear about that much. I think that it’s a shame because it’s so beautiful and inspiring. So it’s definitely an experience I’ll never forget,” she said.

The culture she experienced was traditional Chinese culture, with a history of thousands of years and said to be inspired by the heavens. Some of the 17 or so dances Shen Yun performs take audiences on a journey from the culture’s beginning through to the present day; and from the opening dance, “Salvation and Renewal,” to the last, “Hope for the Future,” the spiritual theme shines through.

We don’t see this type of culture presented, she said, but we should. “It’s such a beautiful and colorful, inspiring and spiritual thing to see,” she said.

Some of the dances explore China’s different ethnicities, and these broadened Ms. Garcia’s understanding of China’s diversity, a country she had thought of as homogenous.

But China has more than 50 ethnic groups, and each year Shen Yun chooses different folk and ethnic dances and traditions to highlight—from the people of the Himalayas to those of the  northern countryside.

In addition to the educational experience Ms. Garcia enjoyed, she felt simply in awe of the dancers.  Having studied contemporary dance, ballet, and jazz herself, she was astounded by what she called “the professionalism of the dancers.”

She was keenly watching the dancer’s feet, knowing that their placement was terribly important, and she plans to take the fluidity she witnessed in the dancer’s arms with her to her next ballet class.

“With that professionalism, they have so much feeling and emotion with every move and every step; it’s captivating every time they move or dance,” she said.

“When they dance, they have a very weightless feeling. Whenever they jump or they do any of those tricks that they do, it’s like, it’s like they’re flying. It’s like gravity doesn’t apply to them. They can do what they want, it’s just beautiful and elegant,” said she, referring to the tumbling and aerial flips which are part of classical Chinese dance.

“Any teenager would love to see this experience,” she said.