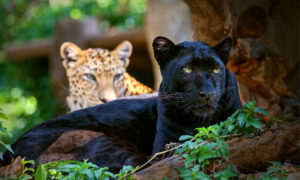 Panthers Are Actually Just Black Leopards With Invisible Spots, but Why Are They So Ultra Rare?
0
Share Now
TelegramFacebookTweetEmailTellMeWeReddit
Copy Link 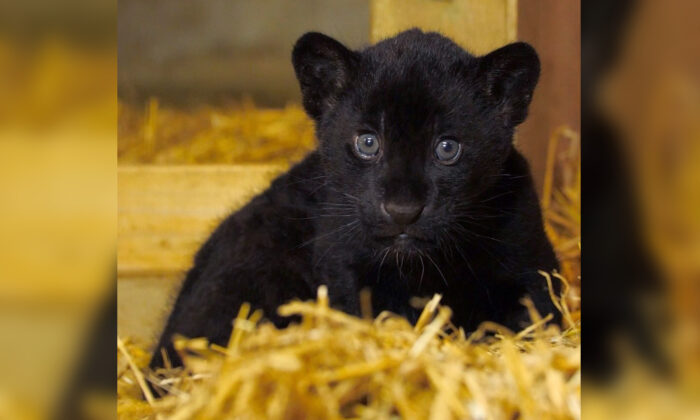 A rare female black jaguar cub, with a coloration seen in only 10 percent of wild jaguars, was born at The Big Cat Sanctuary in Kent, England.

Keepers were “over the moon” at the new arrival of the feline on April 6, Briony Smith, curator at the sanctuary, said in a statement.

“I cannot believe how quickly she is developing compared to other big cat cubs, and this seems to be normal for jaguars,” she added.

The “gorgeous girl” was born with her eyes open at 11.10 a.m. and was walking well by 2 weeks of age. She was “tearing around the dens” shortly thereafter.

The cub’s mother, Keira, was born at Paradise Wildlife Park in Hertfordshire in 2017. Keira and a black jaguar, Neron—from whom the cub gets her coloration—were paired in 2019, and were enlisted into the European Endangered Species Breeding Program in an effort to elevate jaguars out of “near threatened” status.

This cub is their first together.

Keepers have been weighing, monitoring, and socializing with the baby jaguar, who appears to be in great health.

During her 4-week health check, the cub weighed in at just over 3 kilos (6.6 pounds), an ideal weight for her age. Vets were impressed by her strength, size, and stockiness, crediting Keira for being an incredible mom.

“By all accounts, the way things are going at the moment, she’s going to be a very healthy and happy individual,” said Giles Clark, the sanctuary’s Director of Big Cats and Conservation.

The world’s remaining 170,000 wild jaguars are mostly concentrated in Brazil, according to World Wildlife Fund.

The jaguar is listed as “near threatened” on the IUCN Red List of Threatened Species. Deforestation for logging and cattle ranching remains a major threat to their ongoing survival in the wild.

The arrival of The Big Cat Sanctuary’s jaguar cub is a boon for the species. The cub, said Smith, has “bags of attitude especially when her mother decides it’s bath time and is outgoing and very curious.”

The sanctuary currently refers to the cub as “baby” but has asked its supporters to help choose her name. The front-running name options that have been provided are Killari, Inka, and Inti. Supporters can vote by donating 5 pounds (approx. US$7) to the sanctuary, with 25 percent of the proceeds going toward jaguar conservation in Costa Rica. The voting period ends on Aug. 1.

Until the sanctuary opens to the general public in August, the cub is enjoying bonding time with Keira in a private enclosure.

“It is an absolute pleasure to watch her grow and develop,” Smith shared. “I can’t wait for the public to be able to see her when she is allowed out to explore her enclosure.”

(Courtesy of The Big Cat Sanctuary)