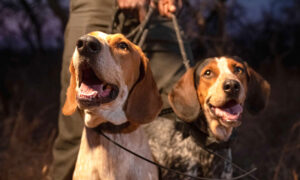 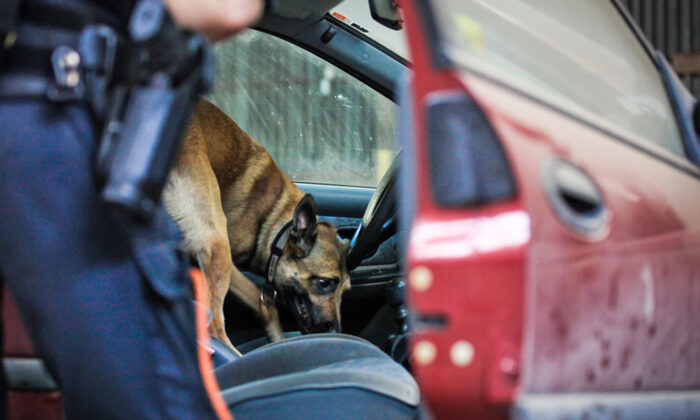 A Florida Highway Patrol K-9 has earned his whiskers by assisting in a drug bust for a substantial quantity of illegal pills. After K-9 Titan’s human counterpart stopped a vehicle for a seat belt violation, Titan’s keen nose sniffed out a more insidious infraction of the law.

There were over 900 MDMA or “ecstasy” pills stashed inside the vehicle.

The trooper stopped the vehicle on Aug. 28 on Florida’s I-75, according to WFLA, for following too closely as well as seat belt violations. Approaching the vehicle, the trooper noted that its two male occupants seemed overtly nervous, so he summoned his highly trained K-9 companion to investigate.

Titan soon sniffed out the 907 hidden pills, divided and tied up into bags of 100, and alerted his handler. Patrick Allen, 31, and Jelani Burwell, 38, were arrested and driven to the Hernando County Jail and are facing a string of drugs charges.

Florida’s Highway Patrol (FHP) in Tampa posted a photo of their proud-looking K-9 and a photo of the drug haul on Twitter the day after the bust. “Good boy, Titan! I hope he got a big chicken dinner!” wrote one supportive netizen in response to the tweet.

This is not Titan’s first sniffer-dog success story.

The diligent K-9 made headlines in May 2020 for assisting FHP troopers with another arrest in Pasco County. After stopping a red Pontiac whose driver had ignored a stop sign, Titan’s handler deployed the dog, who swiftly uncovered several large trash bags containing marijuana stuffed into the back of the vehicle, Fox 6 reported.

Titan’s handler described the two men in the vehicle, who were stopped just before 2 a.m., as “visibly trembling.” The trooper quickly discerned the smell of marijuana, and Titan gave confirmation by signaling an “alert” for the presence of drugs.

Both the driver and his passenger were arrested.

The accompanying photo showed Titan sitting front and center by the state trooper’s patrol car, with dozens of freezer bags stuffed full of marijuana on the bonnet of the car and spilling onto the floor beside him.

The FHP’s K-9 section was established in December 1983, with its stated goal, according to Florida Highway Safety‘s website, to increase detection of illegal drugs.