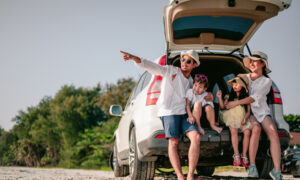 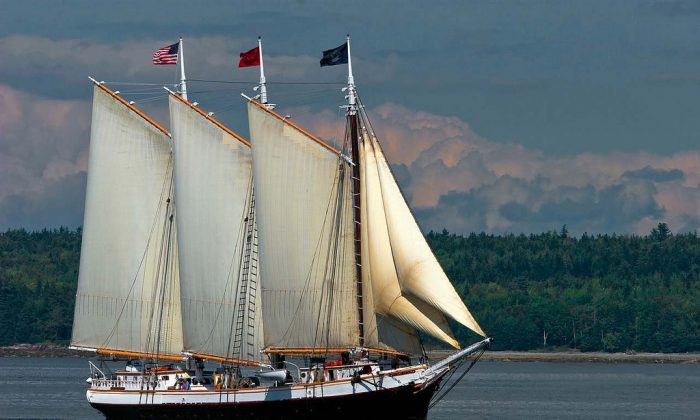 Gone Windjamming: Exploring the Coast of Maine—Wherever the Wind Takes You

ABOARD THE VICTORY CHIMES, Maine—The crew refused to eat lobster.

It wasn’t so much mutiny as a surfeit of a good thing. No matter that the lobsters had been freshly caught that morning, steamed in seawater to a bright scarlet, and were now dripping with butter and juices, served with corn on the cob on the side.

“They get a little tired of lobster,” says the chef, James Tompkins.

That’s how you know you’re in Maine.

Tompkins churns out hearty breakfasts, like pancakes with those little Maine blueberries that burst with flavor, and eggs Benedict with lobster; warming lunches like Thai red curry or beef barley soup; and sumptuous dinners of spice-encrusted prime rib, and more. He does it all in the galley (that’s a kitchen, for us landlubbers) of a tall ship that comes and goes through Penobscot Bay at the will of the wind.

It’s to be expected that his cooking is also at the mercy of the elements to some extent. For 16 years, Tompkins cooked in Las Vegas, under the bright lights, with eight ovens, four stoves, and tons of room at his disposal. Here, he does it all in 100 square feet of space, cooking on a temperamental diesel-powered cast iron stove nicknamed “The Beast” that has no thermostat. The Beast has to be woken up every morning at 4:30 a.m., since it takes a full hour and a half for it to muster enough heat to cook anything. Tompkins takes advantage of the ship’s stability—relatively speaking—while it’s moored to poach eggs or bake a cake. Even so, a lopsided cake, thanks to the movement of the tides, isn’t unheard of.

This is how cooking goes on the Victory Chimes, a 132-foot-long schooner and national historic landmark. It’s the only three-masted windjammer that has been sailing continuously for over a century.

Look in your pocket: If you happen to have a Maine quarter, that’s the Victory Chimes on one side of it.

Though the people of Maine voted to have the ship on the quarter, it almost didn’t happen. After being told it would be too difficult to engrave the image, the co-captains, Kip Files and Paul DeGaeta, found someone to do the engraving to show that it could indeed be done. With some political support, the Chimes made it back on; though, Files admits, there was a bit of rule-breaking. Normally, he says, whatever is featured on the quarter is not supposed to be privately owned.

“The worst part of it is no matter how hard we tried, they wouldn’t let us put our web address on the back,” he says. The 800 phone number was also a no-go, he adds.

To have a Maine windjammer make it on the state coin attests to how iconic it is, and to the role it played in history—ferrying lumber and goods up and down the East Coast in days past.

People go “windjamming” from all walks of life and for all sorts of reasons. “For some of them, it’s the romance of the sea,” says Files. “Some of them are historians and want to sail on a vessel before it goes [out of commission]. Some are looking for a soft adventure, some to see coastal Maine.”

It’s a completely different experience from being stuck bumper to bumper along Route 1, especially during the high season in the summer (“funneled through” is how first mate Robert Wheeler puts it).

If you ask the captain, he’ll tell you the common denominator among most passengers: They say windjamming is the most relaxing vacation of their lives. The prospect of having no particular destination, simply going wherever the wind takes you—with the wisdom of the captain—is a complete change for those used to a rigorous schedule. That process, in which fidgetiness gives way to relaxation, takes about 48 hours, from Files’s observations.

“I forget about home. I’m in the moment,” says one of the passengers, Nancy Anderson, of Monterey, California. Like a cat, she sometimes can be found on a mat on the deck, napping in the sunshine. This is her 18th cruise and her first on a windjammer. She does miss room service, she admits. The cabins are comfortable but simple, outfitted with bunk beds.

While sailing, there is not much to do except watch the world go by, and admire the sails as they billow against the blue sky as you’re lulled by the gentle rocking of the waves. It’s easy to daydream.

As the schooner sails, you’re almost always within sight of a coastline—Maine has more than 3,000 islands. And in this particular stretch of mid-coast Maine, it just so happens that because of a geological shake-up eons ago, the rocks here share their makeup with parts of Scotland and Ireland. With all the buffer that the islands provide, the sailing is smooth.

If you’re lucky, you can spot whales, porpoises, or seals. I see many bald eagles soaring overhead.

The Victory Chimes isn’t the only windjammer to ply these waters. There are eight others in the fleet of the Maine Windjammer Association. One day, we are within view of the Angelique, a windjammer with spectacular ochre-colored sails.

Later that afternoon, we are moored not too far from the Angelique at Pulpit Harbor on North Haven Island. It has been maybe two days since we left Rockland Harbor, but seeing humans other than my fellow passengers and the crew holds a kind of fascination. They stare at us; we stare at them. There’s less deck space on the Angelique but the folks onboard are more daring, I reckon: I am bundled in fleece (and at night, a down jacket), but I see a woman in a swimsuit get in the water. Maybe she is from up north and this is balmy for her. Files says the water temperature is about 59 degrees Fahrenheit. She is a brave woman, I decide.

Each season holds its charm for windjamming. In June, the days are long; summer is high season, perfect for beach-combing excursions. In September, the leaf colors start to change, and the days are cooler but clearer.

At the end of every afternoon, Files gathers us around a map of Penobscot Bay and traces the day’s journey. Often we get to hear about history over dinner. He is filled with stories. We learn that Loyalists lived in this area at the time of the Revolutionary War. When they moved en masse to New Brunswick, Canada, they decided they would not let their belongings and houses fall to the Americans. They slid their houses down the hills and took them to New Brunswick, where you can still see houses that were built in Maine.

At night, after dinner, the boat may be anchored but the conversations roam far and wide: of ill cats, wayward children, or faraway travels. The conversations last long into the night until, one by one, drowsy voices give way to silence.

And that’s when, in the darkness of the night, the stillness becomes eerie. Nothing but a lantern, a wine bottle (empty, perhaps), and the stars.

A blanket of stars, gleaming and glittering by the thousands, a multicolored spectacle. It is startling. Where I live, in New York City, people hardly ever look up—you’re usually looking down to avoid refuse, or scanning from side to side, navigating a sea of people. Here, looking up, I realize for the first time in my life that stars aren’t white. How had I ever missed that? They were sparkling in shades of blue, purple, golden yellow, pink …

When the morning comes, after breakfast, there is time for an excursion on land. In groups of two, we take a motorboat. The Angelique folks, being hardier types, row to shore. The “town” is so sleepy that I pass the general store unknowingly, still looking for “the town.” Still, it is nice to stretch one’s legs and look at the architecture of the houses.

Shortly thereafter, it’s time to head back to the boat. When it’s time to hoist the sails, everyone is welcome to help. You can sit it out, but it’s a fun experience to work together in sync, and there is a great feeling of accomplishment in seeing those beautiful sails go up.

And we’re off. I don’t know where we’re going to end up today, but you know what? That’s perfectly OK.

The Maine Windjammer Association’s fleet consists of nine windjammers, all privately owned; each carries between 16 and 40 guests. They sail the coast of Maine from late May to mid-October. The cost ranges from $585 to $1,808 per passenger for three- to six-night cruises. There are also themed cruises. The fleet goes through 10 tons of lobster per year. For more information, visit SailMaineCoast.com

This trip was arranged by the Maine Windjammer Association.