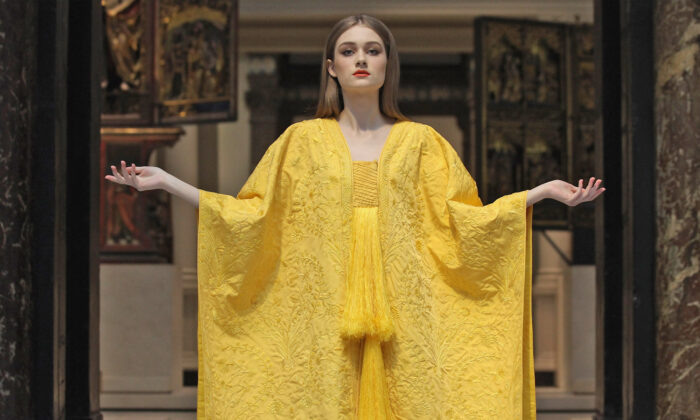 The golden orb-weaving spider may look beastly, but the female’s large silver-black abdomen holds silk so beautiful that people have been trying to harvest it for hundreds of years.

The spider—scientific name Nephila inaurata madagascariensis—is native to Madagascar and is entirely harmless to humans, according to the Saint Louis Zoological Park, Missouri.

The female spiders can grow up to 20 times the size of adult males, which have an average body length of 3 millimeters and a leg span of 10 millimeters.

The yellow color of the orb-weaving spider’s thread is a natural pigment, and the entire golden orb family of spiders produces this extraordinary color. The spider’s perfectly cylindrical silk is soft, light, and incredibly strong, making it perfect for garments.

Almost a decade ago, two men joined forces in 2009 to complete a task that many have attempted, and failed. They wanted to weave a cape from the spider’s sunshine-gold thread.

Working in Madagascar, textile expert Simon Peers from the United Kingdom teamed up with fashion designer Nicholas Godley from the United States to build a hand-operated machine for harvesting spider silk, based on a century-old design. The silhouette of the cape was chosen for its fairytale quality, evoking ideas of ritual, royalty, and caped superheroes.

“There is a certain madness in launching into something like this,” Godley told the V&A Museum in London, England. “And you could understand why, in 300 years, the very few eccentric people who have tried it have fallen by the wayside.”

“It’s just… it’s too much, really,” Godley said. But the challenge, he added, was part of the appeal.

Over three years, the project harvested an estimated 1.2 million female golden orb spiders, Godley told the V&A Museum. The project employed up to 80 people per day to hunt for these spiders, Godley said; in the wild, golden orb webs are permanent structures that function to catch prey, making the spiders easier than some other species to find.

Once collected, the spiders were kept alive individually—they can be cannibalistic—before being harnessed to the machine and “milked” to extract between 30 and 50 meters of thread over approximately 25 minutes, Godley said.

After milking, the spiders were released back into nature. It takes about one week for a golden orb spider to regenerate its silk, so the same spiders have likely been employed time and time again. The harvested silk was then processed, woven, and embroidered.

Peers described the finished golden cape as an “invisibility cloak,” exclaiming, “really, literally you cannot feel it. It is quite extraordinary.”

Needless to say, the golden cape turned out to be a labor of love from beginning to end.

“[W]hat we wanted to do here was produce something that was a work of art,” Godley told My Modern Met. “I feel like what we’ve produced in some ways is more exceptional because of the extraordinary amount of effort that went into it.

“If we were doing all of this to make money,” he added, “I could think of much, much easier ways to do it.”

Today, the golden orb spider’s handiwork, in the form of Peers and Godley’s golden cape, tours the world as a symbol of nature’s bounty and human ingenuity.