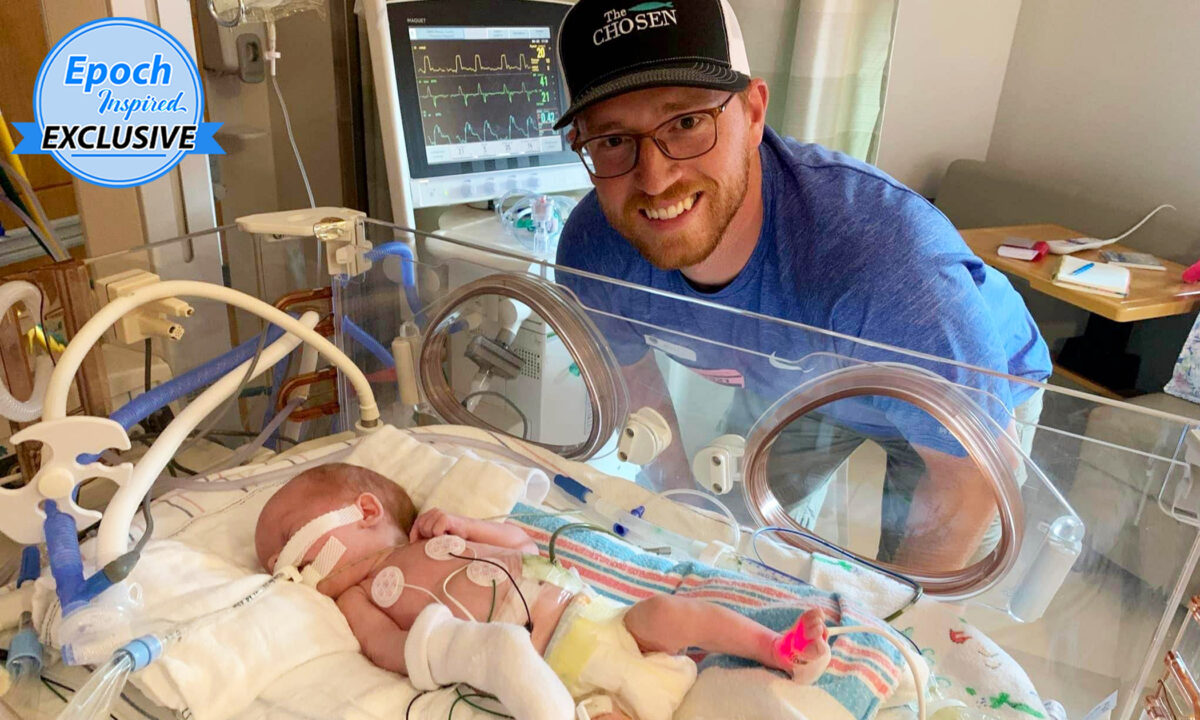 ‘God’s Will’: Couple’s Journey to Adopt Preemie With Severe Birth Defects and Bring Him Home

Parents Amy and Nathan Duncan from North Carolina, who always knew their adoption journey would be a little different, became adoptive parents to a premature baby boy with severe birth defects before he was even born. Doctors thought he wouldn’t survive, yet, after 104 days of fighting and fervent prayers, the baby headed home and is now “completely healthy.”

The Wilkesboro couple started dating when Amy was 16 and Nathan was 18. Their shared Christian faith was a “huge, huge driving factor in getting married,” said Amy. From having the chance to adopt a child with life-threatening birth defects and bringing him back home with no long-term ailments, the couple say it is all God’s glory.

“What we learned is that God is with us in sorrow and in joy,” Amy said. “The Lord will either deliver us from trial, or He will walk with us through it. And either way, we have His presence, and His sustaining strength to endure whatever trial it is—and that’s exactly what happened.”

The Gift of Adoption

Amy and Nathan both knew early on that they wanted to adopt. “The question was, ‘When?'” Amy, 30, told The Epoch Times. “We had three of our own children kind of quick.”

She said that, with so many children in need, they started doing some research on private-lawyer adoption, agency adoption, and foster care. “I really felt like the Lord was whispering to my heart that our adoption was not going to happen through any of these avenues,” she said. “It was going to be someone in need just approaching us and asking us to adopt their baby. We felt like God’s calling us to open our home to children in need and to be a safe place for them.”

Sure enough, on July 2, 2021, Amy received a text message from a woman she had befriended 18 months prior.

Describing the expecting woman as someone in need, Amy said: “She reached out to us and said, ‘I’m pregnant, and I can have it no other way than you and Nathan being the parents of this baby.’ What a surprising gift that was! We grieved for her but also rejoiced that she saw us and wanted us to be Marshall’s parents. The birth mom gave us such a wonderful gift in choosing us to be the parents.

“I really felt like the Lord was saying that this is not about just getting a baby, this is about loving this person in need, hurting, and looking for help. You need to offer them all of your love, as long as they’re willing to take it.”

Baby Marshall was born on Aug. 30, at around 33 weeks’ gestation, at Brenner Children’s Hospital in Winston Salem, an hour from the Duncans’ home.

Amy, a stay-at-home mom who homeschools her kids, and Nathan, who runs his own battery-selling company, Nathan’s Batteries, knew Marshall’s fight would begin immediately. Amy said Marshall underwent an emergency surgery “immediately after birth” as his stomach was “blown up huge and his lungs weren’t able to function.” He was diagnosed with intestinal perforation, meaning the meconium that usually constitutes a baby’s first excretion had leaked into his abdomen. He had small lungs and was intubated, as he couldn’t breathe alone.

“They found when they opened his stomach, an incision across probably 75 percent of his abdomen, that his intestines had holes throughout them,” said Amy. “We were told on the phone that he was gravely ill and would likely not survive.

“My husband and I still desperately wanted to be with him at the time. We had our three children, and a foster daughter that had been with us six months, but we both felt an urgency that this baby in the NICU was our son.”

As only the parents were allowed inside the ward due to COVID-19 restrictions, four days after Marshall was born, the birth mother brought the birth certificate to the hospital, met with a social worker, and told them that Amy and Nathan—who chose Marshall Nate as their son’s given name—were the adoptive parents and “have full rights” to visit him.

To the couple’s great surprise, the birth mother also added their family name to the birth certificate. “It was a real gift to not have to wait, you know, for everything to be finished for him to have our name,” Amy said.

Despite the joy of the adoption, Marshall’s prognosis was poor.

The Prayer and God’s Will

Amy said that, once they got to the hospital, Marshall’s surgeon, doctors, and nurses were all coming in one after the other to tell them how severe his situation was. The doctors told them that the baby boy would need multiple surgeries to cut out sections of his intestines and attach them together, with multiple possible outcomes; he may have a “Crohn’s-like deficiency” for life, or he may have to “receive his daily nutrients through an IV,” she added.

Yet neither Amy nor Nathan once considered quitting; instead, they were overwhelmed by a “fearless peace.” Amy said when Nathan asked of the likelihood that Marshall’s intestines would heal spontaneously, the doctors told them that “that’s not going to happen.” The couple then turned to prayer while submitting to the fact that there would be many surgeries and things and “if that was not God’s will.”

“Nathan prayed on our first day meeting Marshall,” Amy recalled. “He read scripture to Marshall, saying he wanted that to be the first thing he spoke to him. He then laid his hands on his stomach and just so sweetly called out to God to please spare our son from all of the suffering foretold to us by the doctors and to heal his intestines. If that was not His will, then we trust Him still and ask for His strength to handle it.”

Three days later, Marshall started passing food by himself and the drain attached to his stomach “stayed clear,” she said.

“The doctors and nurses couldn’t believe it,” Amy recalled. “After that, the drain always stayed clear. And dye tests showed there were no holes or leaks or kinks in his intestines whatsoever. Finally, the doctor said, ‘You know, I can’t explain it. I don’t understand how, but somehow [Marshall’s intestines] are just as if they were made perfectly, without the holes that were in there before.'”

Amy said, as a family, they walk in submission to God, and that “His will for that situation was to say yes.”

“It was truly the Lord who healed them perfectly. We have just been in continual amazement that the Lord gave us this gift and our Marshall eats normally and won’t have lifetime stomach problems. What a gift!”

Thereafter, it took 104 days in the NICU for Marshall to breathe fully on his own. During this time, the Duncans drove back and forth from their home to Ronald McDonald House every evening to be with their baby.

Amy juggled visits with her foster daughter’s birth mom, social workers, and homeschooling. Friends and family brought meals and helped babysit. “Our needs were met, and even exceeded,” said Amy.

On Dec. 12, 2021, Marshall was discharged from the hospital, just in time for Christmas.

Amy and Nathan, who had built strong relationships with Marshall’s care team, learned how to monitor his oxygen, use his NG (nasogastric) feeding tube and work the feeding pump, and felt prepared. At first, the mass of cords and equipment felt intimidating, Amy said. But the joy of Marshall’s homecoming, and the sheer thrill of the Duncans’ kids meeting their long-awaited sibling, overshadowed it all.

“What’s really neat is that Marshall has fair skin and red hair, just like my husband and my son!” Amy marveled.

The Duncans updated The Epoch Times on Feb. 17 that Marshall is now “completely tube free and completely healthy.” “He is now like a normal baby with no NG tube and no oxygen. Praise the Lord!” she said.

Amy hopes others will be inspired by their very unique adoption story.

“If anyone is questioning whether they want to foster or adopt, our encouragement from our family would be to do it,” she shared. “You have the opportunity to change the trajectory of a child’s life forever, being able to show what it’s like to have a healthy, stable, loving family.