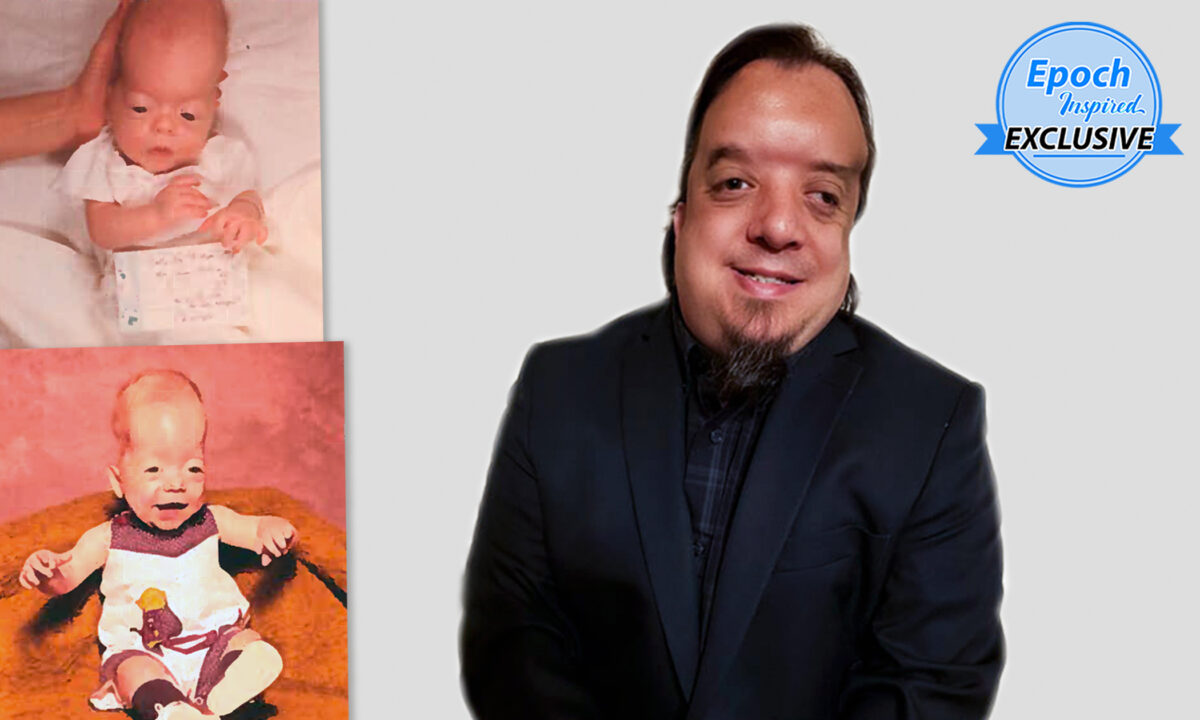 ‘God Created a Brain in My Head’: Boy Born Without a Brain Gets Healed, Inspires Others Toward Faith

'I strive to keep a close relationship with God because He gave me what I needed to live.'
BY Louise Chambers TIMEJuly 20, 2022 PRINT

Over four decades ago, a God-loving family and nurse refused to give up on a baby boy born without a brain. They chose to pray, believing that a miracle would happen. And it did. Today, he is an evangelist minister with a powerful testimony and is leading others to faith in God.

Jacob Phillips, 44, lives in West Monroe, Louisiana. His story began at Louisiana’s Bossier General Hospital on Dec. 12, 1977, where he was delivered by Caesarean section. Phillips says he was born with “triple trouble,” and his doctors weren’t too hopeful that he would survive.

“I was born with hydrocephalus, which is more commonly known as water on the brain. I also had partial skull formation, which means I barely had any skull, [and] to top it all off, I had no brain,” Phillips told The Epoch Times. “My brain stem was what was keeping me alive. Finding all of this out, the doctor told my parents and family I wouldn’t live through the hour. I was given an immediate death sentence.

“I credit my faith in God for where I am today. I strive to keep a close relationship with God because He gave me what I needed to live.”

Phillips’s mother had a miscarriage with her first child some time before he was born, and his father was “extremely distraught” the day Phillip was born. “I can’t imagine what was going through [my mom’s] mind when the doctor gave the bad news. My dad was a quiet man who didn’t say much,” he said.

The hospital room was filled with support that day, including congregation from Phillips’s grandparents’ church in West Monroe. Phillips’s mother threatened to wheel herself to the nursery to feed her ailing son, despite her doctor’s disapproval, and she received the support she needed.

“I remember my grandmother telling me once that she told the doctor I wasn’t going to die. She looked him in the eye and said, ‘You don’t know what my God can do!'” Phillips said.

Phillips’s family clung to their faith and prayed. Others in Phillips’s corner were also led by faith. Nurse Susie asked his mother if she could call her pastor, Don Logan, of nearby Shreveport, while Phillips’s grandparents called their own pastor in West Monroe, Loel Ashbrook, whose friend, Duane Amis, was in the office when they rang.

“I call these three men the Power Trio,” said Phillips. “They came to the hospital to pray for me. God created a brain in my head because of the preachers’ prayer.”

Phillips has Nurse Susie’s recollections in writing, via Facebook messenger, from a conversation she shared with Pastor Duane Amis in 2014. He shared it with The Epoch Times.

Nurse Susie wrote: “I remember the baby without a brain. His head was shaped like a peanut. He had hydrocephalus. We transferred him to Ochsner’s Hospital in New Orleans. The Lord healed that child. The neurosurgeon called him a vegetable that day; I was infuriated! The baby’s head was so filled with fluid, doctors didn’t know if surgery would help. I think Jacob [Phillips] was 3 when his mom brought him back to see me. I wept that day! I am so thankful the Lord let me see His power.”

Phillips, who is legally blind, has undergone 25 surgeries in his life, beginning with a major surgery at 1 week old to have a shunt fitted in his head to correct hydrocephalus. Doctors then built him a skull using bone grafts. But Phillips’s fight was far from over. Aged 10, he almost died when his shunt “supposedly malfunctioned.” He couldn’t hold down food and spent 26 days in hospital, where the shunt was replaced, and a stomach cyst caused by the malfunction was removed.

Owing to his differences, Phillips was bullied from preschool to high school and battled with a negative view on life. Although “somewhat happy” at home, he would often return from school in tears. “That part of my life has been difficult to overcome, but I have left it behind for the most part,” he reflected. “I don’t really have a philosophy I live by, I just take one day at a time.”

Phillips’s rock, and what helped him overcome, was growing up surrounded by people of faith. He says he was “born again” at 10 years old in his uncle’s children’s church. At 17, he was called into ministry. Twenty-five years later, he became a licensed and ordained evangelist minister.

Phillips’s life has become his testimony. Today, he is happily married to his wife of 12 years, Charlene, 42, with whom he runs the ministry Sons of Righteousness. The pair travel the United States together to share “the goodness of God.”

“We met when I was 18, and she was 16, through a mutual friend over the phone,” Phillips said. “I went to see her a few days later, and when I stepped out of the car, I took one look at her and said, ‘I’m going to marry that girl one day.’ I couldn’t ask for anyone better.”

Phillips has also written a book, “Born Without a Brain,” to share his life story and inspire others toward faith. Having wanted to publish it nine years ago, it took hearing the voice of God to set Phillips’s wheels in motion.

“I have a friend in Oregon who helped me get started, and a friend in Mississippi hooked me up with a publisher in West Virginia who would ultimately help me get published on Amazon,” he said. “I wanted to get my story out to show God still does miracles, and He wants to do something in the lives of others.”

Phillips’s advice to anyone struggling in life is simple: pray.

“I’m huge on having a solid prayer life,” he said. “There is nothing in this life that can’t be overcome.”