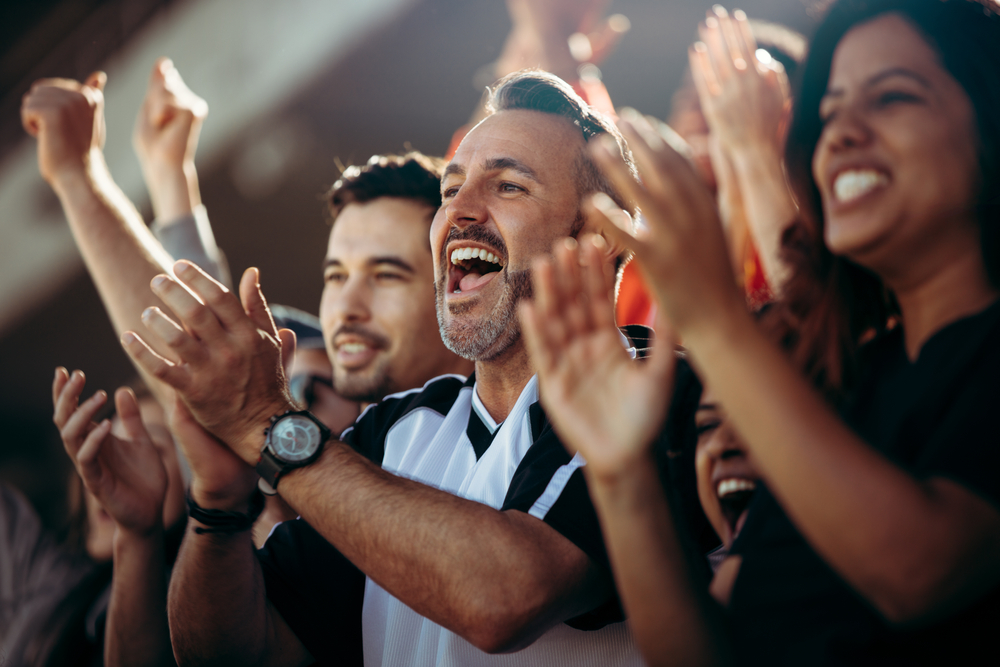 Good sportsmanship applies to the spectators in the game, too. (Jacob Lund/Shutterstock)
Style

Team sports are rowdy and competitive, which is half the fun of being a fan. Players are expected to follow the rules of good sportsmanship, so let’s carry that etiquette into the stands, starting with taking off your hat and standing for the national anthem.

Arrive on time, allowing time for all the potential parking snafus and security checks; add on extra minutes if you plan to grab a snack before you take your seat. Once the game has started, asking 20 people in your row to move so you can get to your seat is disruptive—especially if you make them miss a great play by standing to let you by.

Once you have your seat, stay put; don’t get up and down throughout the game. Try not to block others’ views, but, on the flip side, be understanding if you don’t have a clear view of the field in a packed stadium. It’s absolutely OK to jump up and cheer for a great play, but sit back down afterward. Tell the kids to sit, too—raise them right.

It’s easy to get caught up in the excitement of the event and get loud. But be aware of your volume, and, perhaps even more importantly, your content. Keep your talk clean and don’t cheer for anything negative, such as an injury of a player on the other team. Don’t go on a rant about a bad call—the referee can’t hear you and honestly doesn’t care about your opinion—or you’ll disrupt the enjoyment of anyone within voice range.

Good-natured trash talk is an entrenched part of the game, but keep it among fellow fans who you know well, because it could easily lead to an altercation.

Hot dogs with mustard, burgers with ketchup, and nachos bathed in cheese make the basics of a game-day diet messy. Skip the easily spilled or crumbly toppings, or, if possible, choose something you can eat without making a mess (such as a Cuban sandwich at Tropicana Field, home of the Tampa Bay Rays).

Always grab extra napkins, just in case, and keep your food contained to your space. Whether it’s water, soda, or beer, drink responsibly. No one will appreciate having your libation spilled on them, nor having to get up and down repeatedly for your many restroom visits. Lastly, clean up after yourself, even if those around you don’t.

Children learn by watching their parents, so setting a good example is rule No. 1. Teach them to be respectful of those around them. Cheering is good, but taunting isn’t acceptable. Involve them in the game, pointing out the Jumbotron, the players, and other exciting things to see.

A youngster’s attention span is short, so consider making their first game a relatively lightly attended training season event so they have some space to move around without annoying other fans. Bring their favorite fidget toy, and don’t give into their pleading for sugary snacks such as cotton candy, which creates a mess and gives them way too much energy.

Win with humility; lose with class. Victory is its own reward; there’s no need to belittle the other team’s fans with their defeat, even if they were very annoying during the game. Some people take their team loyalty to an extreme, and their frustrations can become extremely high after a loss, so don’t toss an unintentional match onto an emotional powder keg.

When it’s your team who played well but lost, remember that it’s just a game—your family, friends, career, and life are just fine. Ignore any crowing from the other side. You can’t win them all, but you can always behave with decorum.