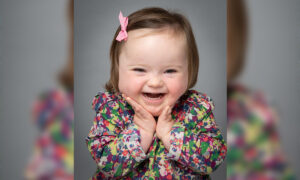 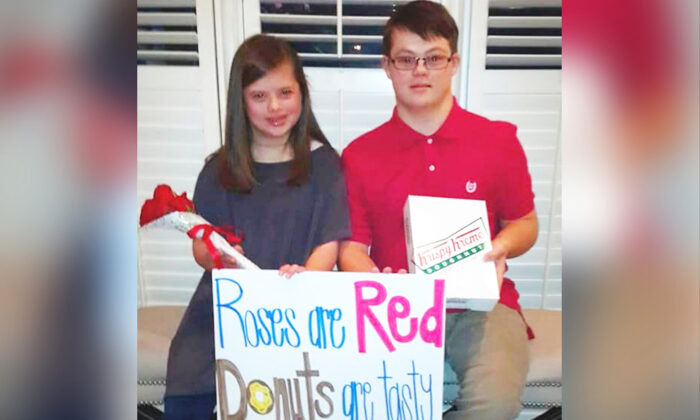 Girl With Down Syndrome Asked Him to the School Dance; Now They’re Planning the Wedding

Last year, a 21-year-old man with Down syndrome attracted media attention for “defying the odds,” graduating from college and landing a job at UPS. Now, he and his girlfriend, who also has Down syndrome, are serving as a source of inspiration for special needs communities.

Jake Pratt, now 22, and Grace Davies, 19, met at their Alabama high school. Their first date was a Sadie Hawkins dance in January 2017, after Grace asked Jake out.

“Our first date was a group date with some other friends,” Jake told The Epoch Times. “We went to dinner and to the school dance. Grace made a poster and brought me donuts to ask me to the dance.”

They had a good time. “I asked her to be my girlfriend not long after that,” he adds.

The Facebook group Positive About Down Syndrome shared a photo of Grace’s poster, which reads, “Roses are red, donuts are tasty. Do me a favor and go with me to Sadie!”

The organization, which aims to support parents of children with Down syndrome, also shared the couple’s inspirational story.

“[Four] years later, their love is still going strong,” they wrote on Jan. 15. “Jake graduated from the Clemson Life program last spring and is now working and saving for their future. … Grace is still currently attending her college life skills program.”

They added that the young couple are busy dreaming and planning for their next steps. Jake is saving for an engagement ring. Grace is happily planning their eventual wedding.

“Jake and Grace have the same dreams as any young couple: to eventually get married and live independently,” the organization shared. “For now, they are making the most of their time together during Grace’s breaks from college and talking on FaceTime daily when she’s away.”

Social media users had glowing words for the young couple, and many found their story inspirational.

“Oh [how] sweet is this,” wrote one mother of a young girl with Down syndrome. “I am excited to see how our Cora will grow. These two are great role models!”

“So this is where my child will be in the future,” said another parent. “Would love to hear what all the parents did for them to have such a successful life.”

In fact, when Jake was born, his parents decided to treat him just like any other child. According to a viral tweet posted by Jake’s sister, Amy, it’s a mentality that gave Jake the confidence to pursue his dreams.

Nor do their dreams stop with graduating college, building careers, and getting married.

Jake told The Epoch Times that he hopes to teach Grace to drive one day so she can pursue her dream job of working in a fashion-related industry. The couple want to get an apartment together after Grace graduates, and they hope to buy a home together one day, too.

For now, Jake’s job at the local golf course is fairing well. While his other position at UPS, which made headlines earlier, is over for the season, Jake has applied for a permanent post and is hoping to hear back soon.

The couple hope their story will strengthen the idea that anyone can achieve the life they want if they believe in themselves and are willing to work hard.

“If you love each other, you can overcome anything,” Jake said.

For any young couples working to build a future together, he added, “Make sure you are making time for each other and always make each other feel important.”

Meanwhile, the world is cheering them on.

“They are a shining example of the fact that individuals with Down syndrome are just like anyone else and can live full and productive lives,” Positive About Down Syndrome wrote on social media.

Followers of the group concurred. “I hope we get more updates on their future,” one commenter said.

“This brought a huge smile to my face in a much gloomier time,” said another. “Congrats and may your future be as bright as both your beautiful faces!”