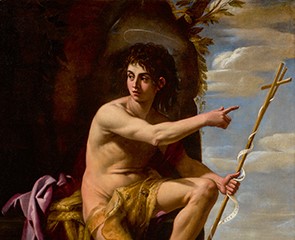 In the 17th century, Roman painters constantly influenced each other’s work. Through friendly competitions or rivalries, they observed their peers’ work, recreating styles and themes of their contemporaries.

It was in this environment that Giovanni Baglione (1566–1643), a Roman Mannerist painter who focused on technique and style, first started his own creative journey that culminated in a stunning painting of St. John the Baptist and produced a book of art history of the period.

The painter started his career with a short apprenticeship to Francesco Morelli, a French and Italian painter and engraver.

The painter’s initial technique and style were in line with what was popular at the time, and many preeminent Italian families and clergy gave him commissions. Some of his most notable commissions were the fresco decorations of the Vatican library, the Charterhouse of Naples, the Lateran Palace, and various churches in Rome.

The Borghese Pope Paul V awarded him the title of Knight of the Supreme Order. Baglione also received the honorific title of Prince of the Academy of St. Luca for his work.

For a few years, Baglione’s work was heavily influenced by Caravaggio, the master of chiaroscuro, an Italian technique combining light and shadow to enhance a character in a painting. Baglione shows this influence in “Sacred and Profane Love,” two paintings with the same name. These works painted in 1602 are Caravaggesque in style and are interpreted by art historians as a response to Caravaggio’s famous “Amor vincit omnia.”

However, these paintings probably were the cause of the 1603 trial between Caravaggio, other Caravaggesque painters, and Baglione. Baglione accused Caravaggio of writing two anonymous defamatory poems about him, which circulated in Rome at the time. Baglione’s reputation survived the trial, and the artist continued to receive commissions from the highest levels of society.

After the dispute, Baglione switched to the Mannerist style, which incorporates clear, defined lines and a sense of grandiosity that is often found in 17th century paintings.

As Baglione’s style matured, he incorporated elements of late Mannerist painters from Verona such as the Cavaliere d’Arpino and Federico Zuccari. Later, he worked with Giuseppe Cesare on the Certosa di San Martino.

Mannerism is a 16th century reaction to the idealized and harmonious High Renaissance that focused on sacred subjects. Mannerist artists focused on technique and style rather than the actual subject. This is very clear in Baglione’s later work, especially in “St. John the Baptist in the Wilderness” (1610).

Baglione’s painting uses a delicate treatment of light against the dark background of a rock. The figure of the Baptist is clearly defined, with strong sculptural lines. In fact, Baglione studied multiple sculptures during his life to achieve a sculptural form in his paintings.

The composition clearly represents the Mannerist style but also the artist’s own style, which shows the influence of other artists. For example, the background of the painting is a landscape with a cloudy sky, which is inspired by Bolognese painting, as this effect was very common among 17th-century Bolognese artists. Orazio Gentileschi also painted “David contemplating the Head of Goliath” around the same time, with a similar relation between the landscape background and the main figure.

Baglione painted in different styles throughout his life; this versatility was later recognized as far north as the Netherlands, by Karel van Mander, a 16th-entury Flemish painter, poet, and art historian.

Baglione’s versatility allowed him to incorporate techniques he had mastered to form his own signature style. Other later artists also appreciated Baglione’s style, such as Giulio Mancini, a pronotary apostolic (a member of the highest order of the Curia, the administrative arm of the Vatican), collector, and writer from the 17th century. Mancini described Baglione in his work, “Considerazioni sulla pittura,” (circa 1617–1621) as one of the only artists of his time who worked “with an individual style.”

Baglione was not only a recognized Mannerist painter but was also one of the first Roman art historians. Between 1639 and 1642, he critiqued art and wrote art history. He wrote biographies of other Italian artists and Europeans, such as Flemish painters Peter Paul Rubens and Paul Bril, who in turn inspired his own work.

The painter produced literary work on his peers: “The Nine Churches of Rome” in 1639 and “The Lives of the Modern Painters, Sculptors, Architects and Engravers (active from 1572-1642)” in 1643, published a year before his death. These, as the titles indicate, retrace the lives and works of important Italian artists between 1572 and 1643.

Baglione’s literary work can be viewed as a 17th-century continuation of the work of Giorgio Vasari, whose work “Lives of the Artists” is considered the first art history book. Vasari, a 16th-century painter, architect, and writer, lived in Florence when the Renaissance was at its height.

Like Vasari, Baglione’s contributions made him essential to art history as he was one of the first to write about the artists of his time. While Vasari focused on 16th-century Florentine artists, Baglione focused on 17th-century Roman artists.  In his “The Lives of the Modern Painters, Sculptors, Architects, and Engravers,” Baglione states that he wants his work to complete Vasari’s.

As Baglione was one of the first to write about the Roman artists of his time (late Mannerism and early Baroque) and show their importance, his writings are very important to art history and did, in a sense, complete Vasari’s work. Yet while Vasari’s biographical work has a more historical approach, Baglione added a more narrative approach as well as a historical perspective. Baglione knew most of these artists personally, so his insights are extremely valuable.

In addition, Baglione’s narrative is organized in five days. The “five days” referred to the reign of the five Catholic popes during this period and the artists who worked in each “day.” This organization was very original for its time and distinguished itself from Vasari’s biographies.

“St John the Baptist in the Wilderness” (1610), is currently on display at the National Antique Art Museum of Lisbon until July 3, 2022. The painting is on a temporary loan from the Gaudium Magnum Foundation, a 2018 Portuguese foundation that aims to follow the common good and has an art collection mostly comprised of Old Masters.