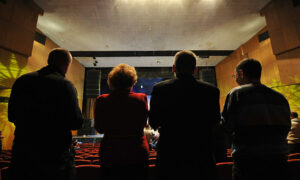 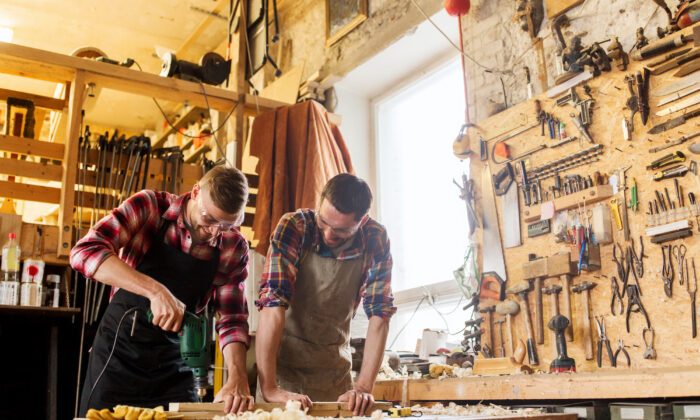 Americans have a long tradition of tinkering and inventing tools that improve the lives of those around us. (Syda Productions/Shutterstock)
Family & Home

Pause in your reading for just a moment and look around you. I’ll do the same.

I’m sitting in what was my daughter’s dining room, but which now serves as my study. To my right is a breakfront, a large antique with a mirror, drawers, and cabinets for storage of dishes and utensils, and lion’s paw feet on rollers. Closer to me is a standing lamp with a single light bulb. Near my elbow is a phone that slips into my pocket, and I’m writing on a 7-year-old MacBook Pro and drinking coffee from a mug featuring London’s Big Ben. On the floor around me are scattered 10 or 12 books that need shelving.

Every single object in this room—the two sticks of gum on the wooden table beside me, the magnifying glass, the bottle of spring water, everything—is the work of human hands and human minds, products of “homo faber,” of “man as maker.”

I don’t know the names or faces of anyone who created most of these objects. Thomas Edison and others are responsible for the light bulb in the lamp, and Steve Jobs and his crew brought me my laptop, but everything else comes to me anonymously, designed and put together by strangers in places like Allentown, Pennsylvania, (the bottled water) and China (the lamp).

But I do know that all of these objects spring from one source: human ingenuity.

As American as Apple Pie

If we Google “American ingenuity,” we find dozens of websites discussing this topic, many of which point to ingenuity and invention as especially American, distinguishing features of our culture that until recently set us off from much of the rest of the world. Even in the early colonial days, we were a nation of tinkers, a people forced by circumstance to make their way with little outside help. “Root, hog, or die” was the old pioneer adage that summed up this attitude, and the men and women who settled here, and those who followed them, built houses, churches, roads, and cities, repaired everything from muskets to harnesses, and sometimes created tools and machines to ease their lives.

Evidence of that history is all around us. Within a two-hour drive of my house, for example, tourists can visit such attractions as the Cyrus McCormick house, Walnut Grove, where McCormick invented the mechanical reaper, a device that revolutionized agriculture. Just north in Staunton is the Frontier Culture Museum, which features various living displays of American ingenuity at work along with houses of European design that demonstrate the evolution of American homes. Closer still is Washington D.C., with its many museums and displays of American goods and products.

Like many of their fellow countrymen, some of our Founding Fathers were first-class tinkers and inventors. Ben Franklin gave us the lightning rod, bifocals, the Franklin stove, swim fins, and even a urinary catheter. Thomas Jefferson invented a machine for making macaroni, a revolving chair with a writing table, a cipher wheel for sending coded messages, and plows better suited to the hilly country around Charlottesville. George Washington’s interest in farming led him to invent a threshing barn for grain that made that process faster and more sanitary.

Necessity Is the Mother of Invention—and of Tinkering

Sometimes emergencies force even the bumbling among us to become tinkers.

Some siblings and I had spent the fall of 1982 working on a 100-year-old dilapidated inn my wife and I had purchased. In December, we turned off the water to the place to prevent the pipes from freezing, but we improperly winterized them. When we turned on the water the following spring, there were leaks from the third floor to the basement. The plumber, a good man whom we later befriended, couldn’t help us for three days, but was kind enough to leave me a spare box of his tools. I didn’t have the heart to tell him that what I knew about plumbing I could have written on a Post-It Note. A small Post-It Note.

We began in the basement, where four pipes came together to form a cross. In the middle of the cross was a leak. I looked at that tiny hole, thought for a few minutes, and then sent my brother up the street to the convenience store to buy some bubble gum. We chewed some gum while we cut a strip of rubber from an inner tube we’d found in the basement. I stuck the gum on the hole, covered it with the rubber strip, and secured that homemade bandage with two automobile clamps.

Twenty-three years later, when I sold the house, that patch was still in place.

Necessity is sometimes said to be the mother of invention, which isn’t always true, but in this case, that adage definitely applied to tinkering.

Ingenuity and invention can do more than fix a leaking pipe. They can bestow great wealth on their practitioners.

In the early 1950s, bank secretary Bette Nesmith Graham was frustrated. She was a poor typist, and the new electric typewriters in use at the bank caused her to make even more mistakes. Realizing that artists often simply painted over their errors, Graham began experimenting with white water-based tempura paints and a small brush, covering her mistyped with the mixture, allowing it to dry for a few minutes, and then typing over the white space.

Graham’s kitchen was first her laboratory, and then, as other secretaries wanted this product, became her first company workplace. Originally assisted by her son Michael, who was later a part of the rock band the Monkees and who went on to make one of the first music videos, Graham struggled initially in her attempts to sell her product. Eventually, however, her company “Mistake Out,” later called “Liquid Paper,” would employ 200 workers mixing and shipping out bottles of this magic eraser.

By the late 1970s, Liquid Paper was turning out millions of bottles of this product every year. In 1979, Graham sold the company to the Gillette Corporation for $47.5 million, which in today’s market is worth well over $100 million.

It Begins With a Vision

Several years ago, I interviewed a friend, Aaron Voigt, husband to Joy, father to two sons, a Navy veteran, and an insurance adjuster.

While out in the field as an insurance adjuster, Voigt found himself with a lot of free evenings. Having enjoyed firearms and shooting since his youth, he began sketching out designs for a miniaturized handgun. After a great deal of experimentation and wading through a swamp of patent laws and government regulations, Voigt created a weapon whose height and length are the size of a credit card, weighs 7 ounces, and fires a single .22 caliber bullet, with storage in the handle for three more rounds. He named the weapon LifeCard and founded his own company, Trailblazer Firearms, for the manufacture and sale of this gun.

When I asked about the gun only firing one bullet, Aaron replied, “It’s one more than you have if you don’t have a gun at all.”

Good point from a good man.

The Kind of People We Are

Skilled pediatric neurosurgeon Ben Carson once wrote: “Before this country came on the scene, for thousands of years people did things the same way. Within 200 years of the advent of this nation, men were walking on the moon, and I want us to recognize this is the kind of people that we are. We’re creative with a lot of ingenuity and a lot of energy.”

Time and again in our history, men and women have employed that ingenuity and energy to improve the lives of those around them. We’ve built airplanes and cars, we’ve given the rest of the world computers and the information age, we’ve invented life-saving drugs and surgical tools. The list is almost endless. If we need proof of American exceptionalism, we need only look at those accomplishments.

There are many reasons for these successes: a patent system that protected inventors, government support and encouragement, the contributions of various immigrants like Alexander Graham Bell, an education system that worked, and a history of tinkering, of always trying to tools for better living.

Some parts of this scaffolding are in need of repair. Government today often acts more as a hindrance than a help in this arena, and our education system is failing many of our young people.

But the greatest and most precious factor in our inventiveness, the one we must most closely guard, is our freedom. Without liberty, we will stifle innovation and development.

That liberty, along with free enterprise, inquiring minds, and the human spirit, brought a wealth of improvement to all of our lives in the past two centuries. Those same virtues will continue to do so if we in turn allow them to flourish.