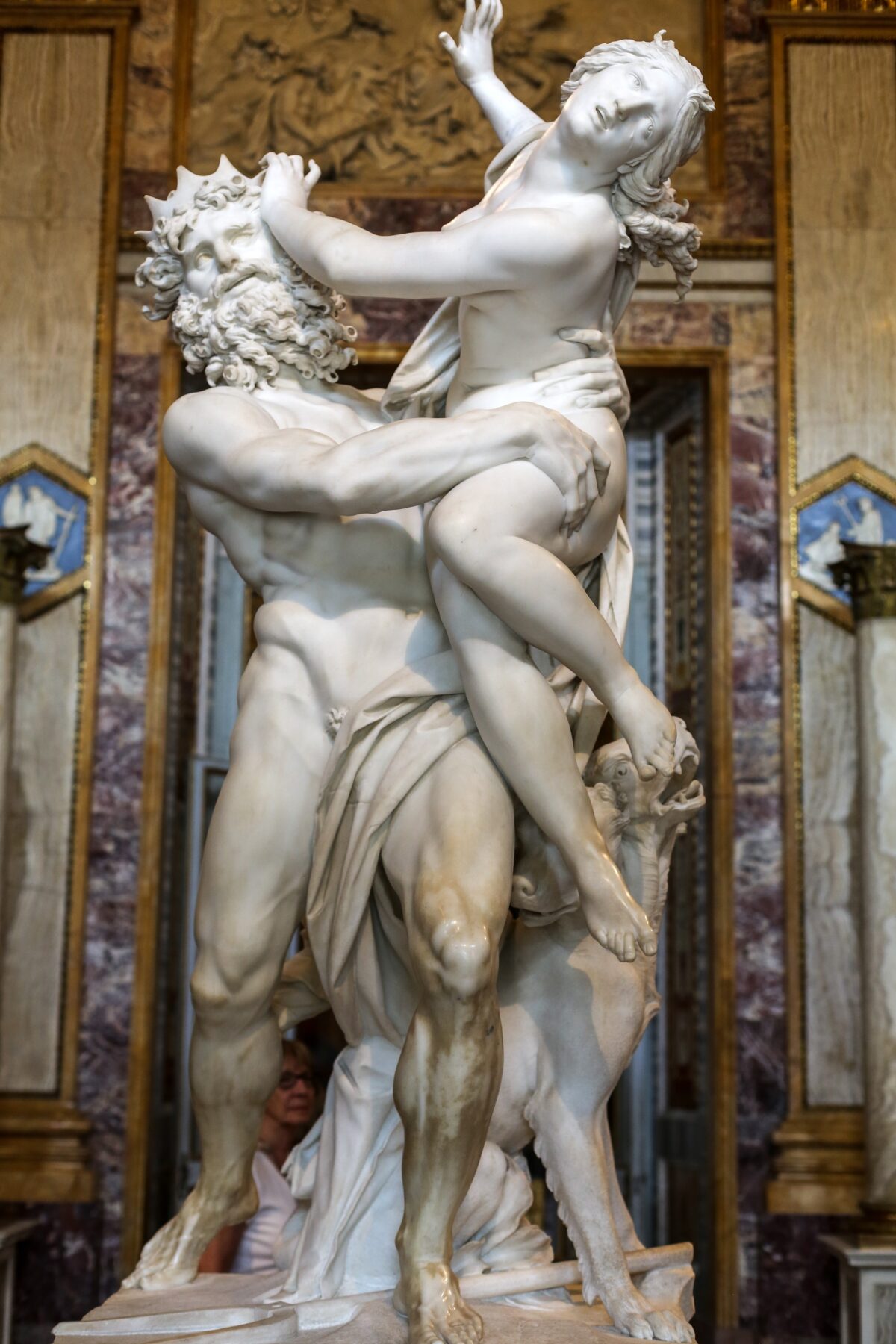 Long before blockbuster cinema delighted audiences, there was Gian Lorenzo Bernini. During his 65 years of activity, the baroque sculptor, painter, and architect anticipated the awe-inspiring effects and technological prowess of modern movies.

While his contemporaries attributed Bernini’s theatrical flair to his Neapolitan mother and his formal precision to his father, Florentine sculptor Pietro Bernini, it seems that more than DNA flowed into the heady concoctions of Bernini’s art. Nurture added to nature with the discoveries of Galileo, the innovations of Caravaggio, and the drama of Shakespeare.

Born in 1598, Bernini enjoyed the advantage of apprenticeship in his father’s successful studio. A child prodigy, his youthful efforts caught the eye of Cardinal Scipione Borghese, the powerful nephew of Pope Paul V, who possessed a legendary eye for art. The 15-year-old boy penetrated the innermost papal circles, studying in the same Vatican palaces where Michelangelo had roamed 50 years earlier, while also sculpting in the cardinal’s new villa amid his impressive collection of Caravaggio paintings. During Bernini’s formative years, Galileo arrived in Rome with his telescope to share his celestial discoveries with popes, princes, and painters.

Cardinal Borghese’s investment soon paid off as Bernini produced iconic sculptural groups like “Pluto and Persephone.” In these masterpieces, he not only captured the climactic moment of action, but dazzled the eye with extraordinary effects like soft skin and flowing hair. A born storyteller, he defied the limitations of working with stone to orchestrate actions unfolding before the viewer’s eyes. By age 25, Bernini was hailed as none other than the new Michelangelo.

The next pope, Urban VIII Barberini, catapulted Bernini to stardom, employing him for family portraits, massive architectural projects (including the imposing 95-foot canopy for St. Peter’s Basilica), and the pope’s own funerary monument.

Bernini’s “Tomb of Urban VIII” unveiled the next great innovation of the artist: mixed media. The pyramidal composition places a commanding bronze statue of the pontiff looking very much alive as he extends a forceful arm—whether to impart a blessing, subdue his subjects, or indicate his many artistic endowments to the basilica. Touches of gilding emphasize activity, as if his movements were catching the light. Below the busy pontiff, however, the menacing figure of Death, represented as a winged skeleton, rises from the sarcophagus to inscribe Urban’s epitaph. Bernini mitigates the image of impending demise with two luminous women in white marble, symbolic of the pope’s virtues, which will ensure him a place in Heaven.

In 1644, Bernini’s meteoric rise stalled abruptly when his papal protector died, only to be replaced by an implacable enemy of the Barberini, Pope Innocent X Pamphilj. Egged on by Bernini’s numerous rivals, Innocent X publicly fired the 46-year-old artist from all his official positions.

Humiliated as well as threatened with bankruptcy, Bernini used this nadir as an opportunity to launch what would become the apex of his career. Eternally hopeful, he said, “Rome sometimes sees dimly, but never loses her sight,” and subsequently embarked on a highly personal work, “Truth Unveiled by Time,” where a gleaming female nude, clasping the sun with her foot atop a globe, would be revealed by the winged personification of Chronos. Instead of bemoaning his fate, Bernini honed his skills and waited.

He didn’t have to wait for long. “Truth Unveiled by Time” remained unfinished as Bernini was inundated with requests for private commissions. The one Bernini accepted became his masterpiece, “Saint Teresa in Ecstasy,” produced for the Cornaro family in Santa Maria della Vittoria. In this spellbinding monument, Bernini harnessed the arts of sculpture, painting, and architecture, revealing an imagination akin to that of a modern movie director.

Bernini sought to illustrate the spiritual vision experienced by St. Teresa of Avila, of an angel who pierced her heart with a flaming arrow, by placing the sculptures in a stage-like setting, with red jasper columns framing them like a theater curtain. The ingenious effect of making the two figures appear to hover in space underscores the supernatural aspect of the scene. A window of yellow glass concealed above the group bathes the white marble statues in a mysterious golden light, reminiscent of Caravaggio’s dramatic lighting effects.

Flanked by portraits of the Cornaros and surmounted by frescoed angels, the work offers a glimpse into the interior life of this legendary mystic. As a boy, Bernini worked alongside Florentine painter Ludovico Cigoli while he painted the Moon, as seen through Galileo’s telescope, for the Borghese family chapel, and now the pupil-turned-master created a lens for the supernatural, a means to reveal mystical visions to the mortal eye.

Pope Innocent soon realized his mistake and recalled Bernini to design a fountain outside his family palace in Rome’s Piazza Navona. Combining a 140-ton obelisk with a water fountain, Bernini’s staggering “The Fountain of the Four Rivers” required his gift for theatrical effects as well as precise engineering. The 55-foot needle of granite rests on a hollow base, evoking the obelisk’s original symbolism of a sunbeam. Below, four reclining figures represent the main rivers of the known continents. Bernini’s image of heavenly light, seemingly transformed into water and dispersed around the circular basin, is a spectacular tribute to the global missionary endeavors launched during Pope Innocent’s reign.

The year 1657 saw Bernini’s triumphal return to St. Peter’s Basilica when he began conceptualizing its most striking monument, the “Altar of the Chair.” Shrugging off the long shadow of Michelangelo, the undisputed master of the human form, Bernini claimed new artistic turf by representing the Holy Spirit. Once again, he united the arts, designing an oval window in the apse to allow golden light to flow over modeled stucco angels who appear to cascade into the chapel. Gilt clouds billow around an enormous bronze throne (containing a relic of St. Peter) apparently suspended in midair, the baroque precursor of CGI. During the liturgies, as the music of the choir served as a soundtrack and the incense wafted through the air, the congregation would be swept up in a collective vision of the Heavens erupting into Earth.

The 17th century was the age of theater in Europe. Although Shakespeare died when Bernini was 15, the idea that “All the world’s a stage” permeated the young sculptor’s era. However, for the devoutly Catholic Bernini, who also wrote and directed plays, the fall of the curtain did not mean “Life’s but a walking shadow, a poor player” or “a tale told by an idiot.”

Rather, the end of one’s mortal performance opened a door to a greater beyond. Bernini’s last work in St. Peter’s, completed two years before his death in 1680, was the extraordinary funerary monument for Pope Alexander VII, a friend and benefactor of the artist. In this composition, Bernini created a magisterial representation of the “Good Death” or the transition to eternal life. At the summit of the work, the pope kneels bareheaded in prayer, unperturbed as the curtain of red jasper rustles to reveal the winged skeleton of Death coming to claim him. Alexander’s virtues are personified around him, and his humble acceptance of death promise a swift rise to Heaven.

Bernini, aware that his hour on the stage was drawing to a close, offered one last vision of hope to draw hearts, minds, and souls toward greater glory.