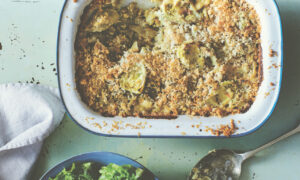 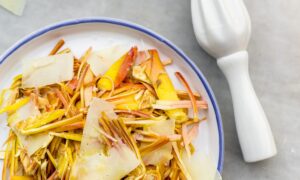 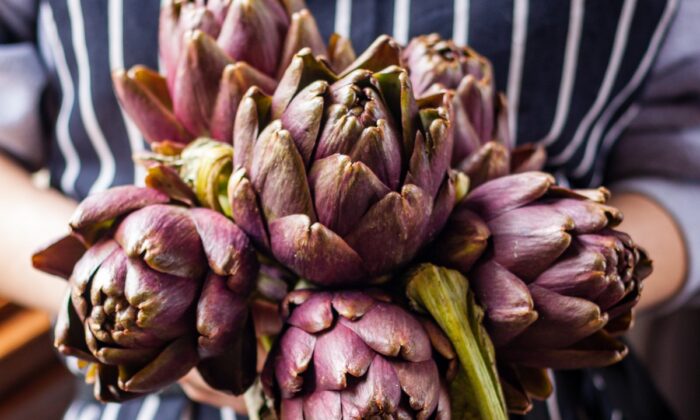 In Season: How to Buy, Clean, and Cook Artichokes

Getting to the heart of artichokes, the noble vegetables that carry us into spring
By Giulia Scarpaleggia
FONT BFONT SText size
Print

When I asked my grandmother if artichokes had always been a part of her cooking repertoire, her answer was simple.

“Artichokes? Artichokes are the first thing you plant when starting a vegetable garden!” Everyone in the countryside had a carciofaia, a patch of land where the large artichokes would grow in majestic bushes, their leaves a dusty green.

I remember my grandmother walking into her artichoke patch with an old knife, almost disappearing between the huge bushes, and coming back with a few, precious artichokes in her hands, ready to trim and dip them in good olive oil with salt, or cook them into a frittata.

Here in Italy, artichokes make their first appearance in our weekly cooking routines just before Christmas, shyly stealing spots next to butternut squash and broccoli. I use them in flans and side dishes, especially baked with potatoes and pecorino cheese in a gratin.

Then, they carry us from winter to spring. As the weather warms, artichokes slowly reveal their spring cooking potential, their herbaceous notes enhanced by mint or lemon. This is when I add them to light soups; serve them raw and thinly sliced, carpaccio-style, with Parmigiano Reggiano; or bake them into savory pies, which loudly call for the first sunny days of the season.

Artichokes are generally considered a vegetable, but if you look at them closely enough, you’ll realize they are buds. In midsummer, they open up, revealing a purple-bluish flower.

As with every vegetable widely used in the Italian and Mediterranean cuisines, they have an ancient history. Artichokes were already enjoyed by the Etruscans and the Romans, but they lived their golden age during the Renaissance era, when they were considered a noble vegetable. As English cookery writer Jane Grigson beautifully writes in her “Vegetable Book,” the artichoke was “the aristocrat of the Renaissance kitchen garden.”

The Medici family of Florence loved artichokes as much as they loved citrus fruit. So when the 14-year-old Caterina de’ Medici went to France to marry the future King Henry II, she brought artichokes—along with other vegetables like spinach, beans, and asparagus—to the new court, introducing them into French cuisine, too.

When cooking with artichokes, we usually prefer to use fresh ones. They take longer to prepare, but they retain a brighter color and a firmer texture, which are worth the time spent cleaning them.

In some regions of Italy, you can even buy artichoke hearts at the market, sold already prepared for cooking. They float in a large bucket of acidulated water, to prevent them from turning dark.

The whole artichokes are neatly piled up, usually divided according to their freshness. The top quality ones, sold with fresh leaves and stiff stalks, are firm to the touch. This means they are the freshest, and probably were picked right before going to the market. These are the best artichokes to use if you want to have them raw in a pinzimonio: the tougher leaves removed, the hearts served with extra virgin olive oil and salt for dipping.

Then there are the older artichokes, which might have been harvested a few days earlier, sold at a cheaper price. Usually they do not have leaves, the stalks are softer, and they are spongy to the touch, as they do not offer resistance when you squeeze them with two fingers. That’s the reason why you’ll see hordes of old women squeezing all the artichokes at the market, evaluating their freshness with a knowing touch. Even though these artichokes are not as fresh, they are still perfect for cooking into other recipes, such as a sformato (a savory flan) or a pie.

How to Clean and Prepare

Now that you’ve gotten your hands on fresh—and often rather expensive—artichokes, how to tackle them? Don’t be scared by the amount of leaves you’re going to discard.

You might be used to boiling artichokes whole, and eating them by dipping the leaves one by one in butter or mayonnaise, scraping the edible parts off with your teeth. In Italy, we instead prefer to clean artichokes before eating them, therefore making it easier to appreciate and enjoy them in a dish, either cooked or raw.

You can treat cleaning the artichokes as a form of kitchen meditation: while your hands are occupied with the mechanical action, your mind is free to wander.

Start with a large bowl of acidulated water—that simply means squeezing the juice of a lemon into it. This will prevent the artichokes from browning, as they are rich in iron and oxidize quickly once cut. Leave the two lemon halves in the water to use to rub the cleaned artichokes, and your hands, too.

First, remove the outer leaves, until you reach the pale softer ones. With a sharp knife, remove the spiky tip of the artichoke, then cut it where the base meets the stem. Set the stem aside. Rub the artichoke heart all over with a lemon half and plunge it into the bowl of acidulated water. Keep going until you finish all the artichokes.

Then, tackle the stems. Peel them until you reach the whiter, softer part inside, rub them with half a lemon to prevent them from browning, and add them into the bowl of water, too. Artichoke stems are flavorful, perfect to use in a risotto or pasta sauce,  or stewed along with the hearts.

If you’re serving your artichokes raw, cut them in half and use a small spoon to scoop out the furry choke, if needed. If they are fresh, you probably won’t need this step.

Once the artichokes are clean, you can use them in many recipes, raw and cooked. These are some of my favorites.