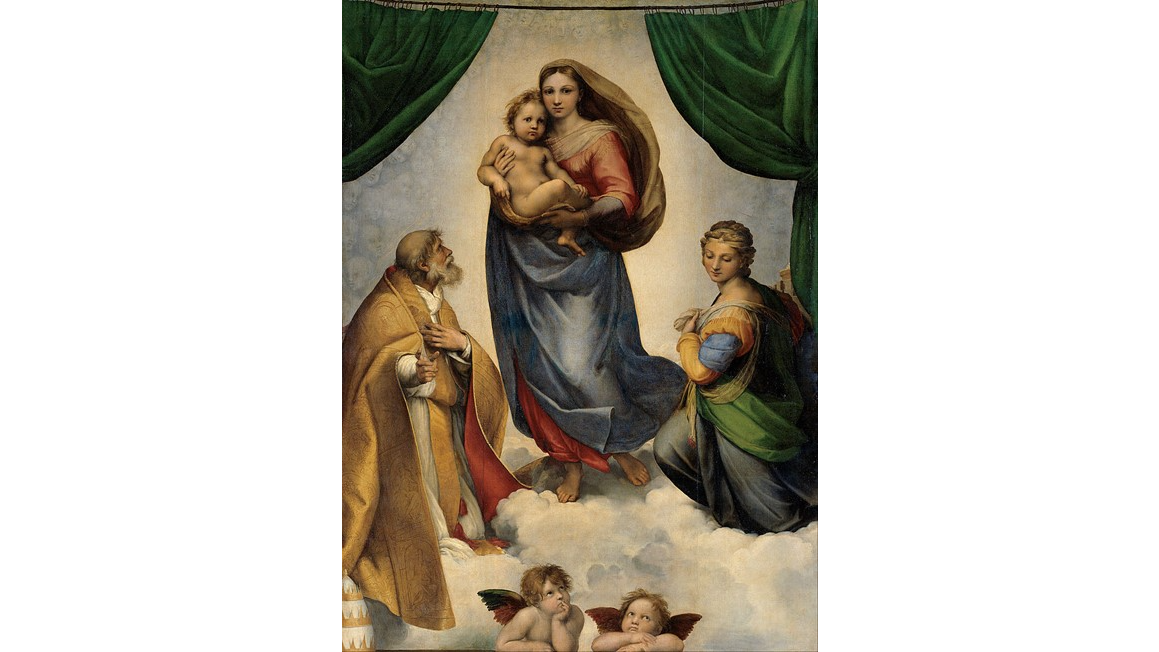 Gatherings of Holy Ones: ‘Sacra Conversazione’

As the host opens the door, guests in jeans enter, slap palms with the host, call out “Hey!” and find a place to sit, or maybe head to the backyard grill. Social gatherings are casual affairs today. Most people don’t attend formal functions often, much less with “important people.”

To be invited to an event with important people might require more formality: suit and tie, nice dress, guests chatting in small groups, drinks and hors d’oeuvres attractively set to the side in a tastefully decorated room.

Taking this up a notch, consider what it would be like to attend a gathering with some of the greatest figures who ever lived, even divinities, and post a photo of it on social media.

From Heaven to Earth

At the turn of the 15th century in Europe, artists made paintings on panels and hinged them so that they could be folded in order to be protected and stored. The most famous multipanel painting (called a polyptych) is the Ghent Altarpiece by Jan van Eyck. The center panel shows Jesus as King of a heavenly kingdom, with panels on either side showing Mary his mother and John the Baptist.

Artists wanted to show Jesus and the saints in heaven but in ways that also brought them closer to people. This technique evolved from formal courtly settings to domestic environments that made Mary, Jesus, and the saints more approachable. The paintings show figures gathered in one setting; saints, angels, and even those who paid for the work of art are shown with the guests of honor: Mary and the baby Jesus.

Fra Angelico (1400–1455), the artist monk of San Marco monastery in Florence, Italy, is considered the first artist to arrange a group of figures as a “sacra conversazione,” or sacred conversation. In his Annalena Altarpiece, he brought figures together in the same space, as if at the court of a sovereign. The figures, of different historical periods, stand together respectfully on either side of the Virgin and Child.

To bring his figures together, he oriented them on a horizontal panel. Thus, the sacra conversazione technique brought about a big change to painting. Artists made less use of separate vertical panels and, instead, placed all the figures on one panel or canvas. Artists then began to use the horizontal format more frequently, which is the orientation that artists use most often today.

The Annalena Altarpiece was commissioned by the convent of St. Vincent of Annalena and shows the Madonna and the baby Jesus seated at an angle on a simple raised throne. On Mary’s left we see (from left to right) saints Peter Martyr, Damian, and Cosmas; on the right are (left to right) the saints John the Evangelist, Lawrence the first martyr, and Francis of Assisi.

At the bottom of the painting is the predella, which is a series of panels arranged horizontally. A gold background hints that this is not a natural setting; there is a celestial feeling to the artwork. The figures, all with halos to indicate their holy status, are engaged in reading or interacting with each other, as if on a normal day in a heavenly court.

The artist introduced another innovation with St. Cosmas gesturing toward Mary and Jesus while looking at the viewer. “The Annalena Altarpiece would become the model for other Florentine altarpieces into the early 1500s,” according to GrandCentralPark.org.

This compositional technique caught on. Northern Renaissance painter Jan van Eyck, credited with inventing oil paint, used the sacra conversazione style to include an ordinary person in his painting. “The Virgin and Child With Canon van der Paele” shows Mary and the baby Jesus at the center, on a low throne surrounded by St. Donation on the left side of the painting, and on the right, the donor who paid for the painting, Canon van der Paele, flanked by St. George.

The wealthy clergyman was gravely ill and intended the painting as an altarpiece memorial for himself. Latin inscriptions on the original borders identify the saints, while van der Paele is known from historical records. St. George, helmet in hand, presents the donor to Mary. The figures wear rich finery: furs, silks, and brocades.

This informal grouping, as if in Mary’s private quarters, shows Jesus as he plays with a bird while greeting his visitors. Van der Paele does not look directly at any of the heavenly figures, but stares into the middle distance, observing social and spiritual decorum. This is van Eyck’s only horizontal painting and one of the earliest known sacra conversazione compositions of the Northern Renaissance.

Titian made several paintings using this horizontal composition and arranged his figures in an even more intimate setting. As if in a great lady’s living quarters, the Virgin plays with her wriggling child as the guests arrive. Saints Dorothy and George approach to play with the baby. “In the relaxed and confident painting Titian brings the charms of the family circle to ‘sacra conversazione,’” according to the Web Gallery of Art.

The saints appear as indulgent relatives of the playful child. A pulled-back green curtain appears often in these compositions, such as in Raphael’s “Sistine Madonna,” as if giving viewers a glimpse of heaven.

Botticelli used the technique in artworks such as the San Barnaba Altarpiece. As angels pull back a curtain, the figures around the Virgin and Child appear animated and with expressive faces on each.

Dominico Ghirlandaio’s “Sacred Conversation of the Ingesuiti” shows the magnificent court of Mary and her child as they are surrounded by saints and angels. Archangels appear around Mary—Michael on the left and Raphael on the right—and kneeling below her are the saints Justus and Zenobius. The strong, sharp lines and rich, glowing colors hint at a heavenly realm, while fruit trees and evergreens in the background present a natural setting.

As patrons placed these more intimate paintings in their private residences and used them as objects of prayerful devotion, artists responded in turn. These paintings would be a significant source of income for Italian artists.

How to Treat Each Other

Renaissance artists used sacra conversazione to inspire viewers to have uplifting interactions with others. These paintings can show us how to have a social gathering: a gracious setting with soft, beautiful music, and an attentive host who serves well-mannered guests with quiet dignity.

We are and have always been social creatures. In today’s culture of waning formality, casual gatherings focus on eating and drinking and not much on talk about what’s important or inspiring. But we might just want to brush up on what we learned about how to behave in polite company. Like the three angels visiting Abraham and Sarah or Jesus at the Last Supper in the Bible, we may never know if a celestial being is visiting us or who might be our host.