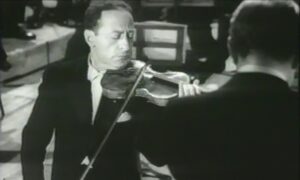 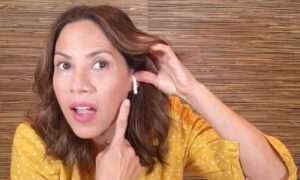 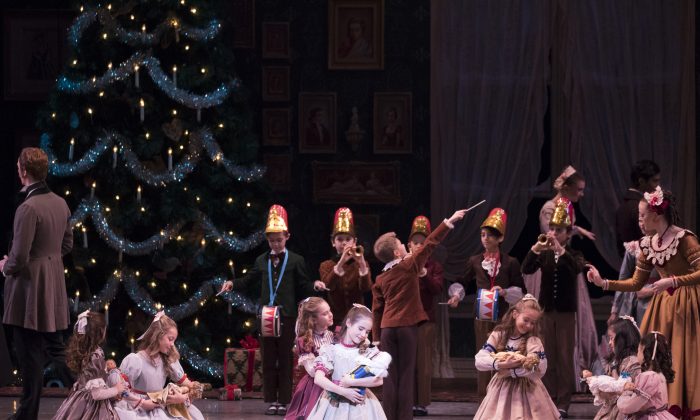 NEW YORK—When seated in Lincoln Center’s David H. Koch Theater and then hearing the opening strains of Peter Ilyitch Tschaikovsky’s enchanting score, one can relax and give oneself to that music and the exquisite dancing and dance story that soon follows.

This is the George Balanchine version of the “Nutcracker,” which the legendary choreographer first presented in February 1954 as New York City Ballet’s (NYCB) first full-length ballet. It has remained a staple of the holiday season ever since.

The curtain opens on a cheerfully furnished living room, replete with a Christmas tree. It is Christmas Eve. Young Marie (Maria Kashvili) welcomes her godfather Herr Drosselmeier (Robert La Fosse), who gives her a wonderful nutcracker.

After the party, consisting of many young children (two casts, of 63 young students of the NYCB school, alternate performances), Marie, alone, falls asleep on the sofa.

As the Christmas tree grows to gigantic proportions, stretching beyond the ceiling (generally eliciting a gasp from the audience), Marie’s nap is interrupted by a battle of toy soldiers and giant mice. The Nutcracker defeats the Mouse King and changes into a prince. Marie and the Prince then enter the Land of Sweets, presided over by the Sugar Plum Fairy (Lauren Lovette).

Now the true business of the evening begins, for now the audience is treated to a fabulous display of terpsichorean excellence, ostensibly to entertain the Prince and Princess (formerly Marie).

There is a group of angels, played by the children. There is a group comprising Hot Chocolate from Spain, with a small ensemble exhibiting vivid Latin passion.  Savannah Lowery portrays Coffee from Arabia, displaying the mystery of that part of the world. Tea from China consists of a pas de trois of Ralph Ippolito with Rachel Hutsell and Emma von Enck.

There were groups of Candy Canes and Marzipan Shepherdesses.

A sure showstopper was Mother Ginger (the performance I saw featured Gilbert Bolden III.) The enormous creature shelters eight little Polichinelles, who crawl out from under her skirts onto the stage, dance, and then reenter their cozy shelter.

There is the lovely “Waltz of the Flowers,” with the enchanting Dewdrop, Megan Fairchild, dotting among the ensemble of flowers.

Finally, the Sugarplum Fairy and her Cavalier (Anthony Huxley) perform a majestic dance.

Then Marie and the Prince bid their goodbyes and soar off in a sleigh pulled by flying reindeer.

Scenery was, as originally designed, by Rouben Ter-Arutunian, with costumes, likewise, by Karinska. The musical conductor is Daniel Capps, with violin solo by Kurt Nikkanen.

The dancing, including that of the corps de ballet, is of the highest caliber, not only technically but is imbued with a powerful enthusiasm and emotional content.

All told, it was a thrilling evening of music and dance, the optimal culmination of theater, and a lovely spectacle for adults and children alike.

Diana Barth writes for various arts publications, including New Milennium. She may be contacted at DiaBarth99@gmail.com