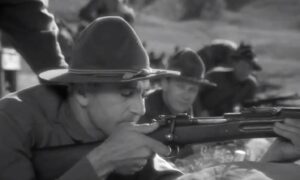 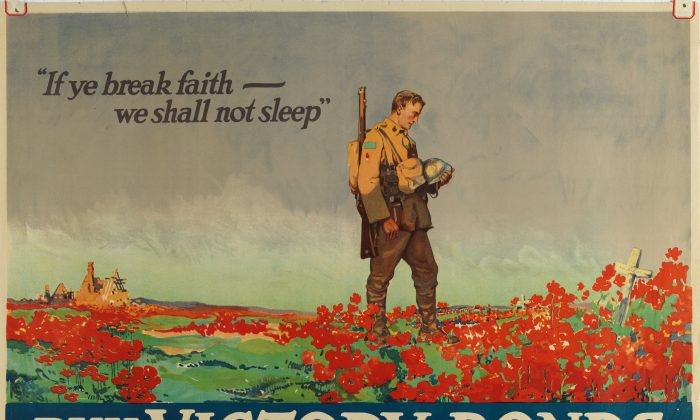 A fundraising poster with a line from “In Flanders Fields.” The poem, which gained almost immediate worldwide popularity among soldiers and civilians, was used in Canada for recruitment and fundraising purposes. (Courtesy of Canadian War Museum)
Arts & Culture

For most North Americans, the mention of Flanders evokes the opening lines of John McCrae’s poem, “In Flanders Fields.” The iconic poem’s imagery of poppies and the blood-soaked ground of battle bedecks the Allied propaganda posters displayed in “Fighting in Flanders: Gas, Mud, Memory,” the current exhibition at the Canadian War Museum.

The exhibition presents a pithy, incisive account of the carnage experienced in Flanders from 1914-18.

The fields of McCrae’s poem are the southwestern lowlands of Belgium. McCrae, a native of Guelph, Ont., and a military surgeon, died January 28, 1918. By the time the war ended later that year, nearly 15 million people were dead.

Co-curated by the War Museum in partnership with the Belgian Memorial Museum Passchendaele 1917, “Fighting in Flanders: Gas, Mud, Memory” presents in seven components a clear outline of what happened and why, and how much was lost by everyone.

The story is chronologically sequenced, its narrative told in meticulously chosen items. The rifle, the gas mask, the duckboard to lay on a muddy field—these are the artifacts of the war’s material culture. The gas attack “siren,” for example, was no more than a child’s ratchety toy, a simple wooden noisemaker.

The exhibition presents a pithy, incisive account of the carnage experienced in Flanders from 1914-18.

The chronology opens with “Belgium in Ruins” and “Belgium Refugees.” Here we see sketches used for recruitment posters—fugitives at sea, weary women with their babies—and Belgian Red Cross posters. The explanatory texts are succinct: When Great Britain declared war on Germany in August 1914, “Canada offered 25,000 soldiers for service overseas.” At that time, Canada’s population was only 8 million and the number of its troops totalled only 3,000 soldiers. It was not long before 35,000 had volunteered for overseas service.

WWI saw the first use of gas to kill on a battlefield. The gases used were chlorine phosgene gas and mustard gas. Germany produced nearly 25,700 tonnes of the stuff, and the Allies 21,900 tonnes. If gassed, were there effective treatments? Not really. In fact, initially, soldiers had only wet handkerchiefs with which to cover their faces as we see in “Canada at War” and “1915 Gas.” In time, some were issued gas masks and respirators—soldiers and pack animals alike.

Most of the deaths on the battlefield were caused by heavy artillery, the explosion of howitzer shells, field guns, and machine guns. By 1916 there was firepower aplenty. The Allies had 30,000 howitzers. Even the Lee-Enfield rifle carried by the soldiers could be modified to serve as a grenade launcher with a range of 275m. Could there be such today?

Examples displayed in “1916 Firepower” include diverse machine guns and field guns, all seen against a large wall screening a black-and-white film of cannon firing.

How did soldiers protect themselves? Not very well. Some were issued a fancy new gadget labelled the “MacAdam Shield Shovel”—a trenching tool that could also serve as a gun blind. However, as the soldiers soon learned, their shovels were neither bulletproof nor particularly useful for digging trenches.

No one could escape the mud. “1917 Mud” tells the story of Passchendaele. In one day, more than 31 mm of rain fell. The Germans built pillboxes of reinforced concrete in the mud, shelters that could withstand most direct hits, and did. The Canadians died trying to build a double-plank road across the mud—1,500 Canadian deaths at Passchendaele in 14 weeks of futility.

The war ended. People shifted their anger to remembrance and heartache.

In the last component of the exhibition, “100 Years Later,” we see McCrae’s poem displayed once more—a copy written in his own hand and given to a friend, Major General Edward Morrison.

“In Flanders Fields” has become part of remembrance ceremonies everywhere. To this day, however, nearly 100,000 soldiers’ remains are still missing on the WWI battlefields of Europe.

“Fighting in Flanders: Gas, Mud, Memory” will be on display until April 26.