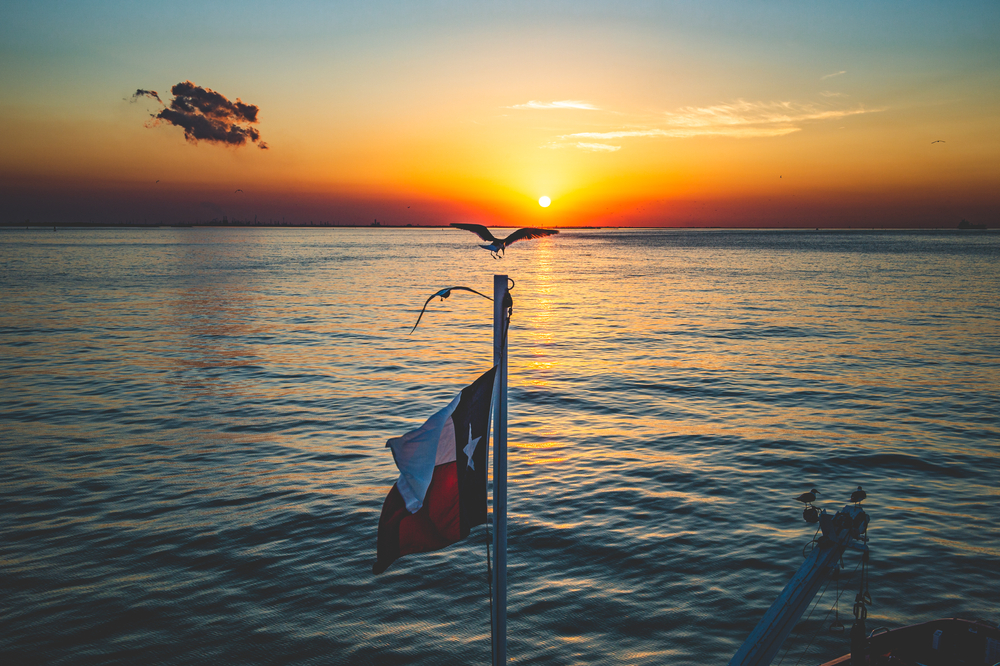 A seagull lands on a flagpole during sunset along the Bolivar Peninsula in Galveston, Texas. (ksnyd_10/ Shuttersock)
Travel

At first, they were elusive, popping heads or fins just above the waterline, then disappearing from sight and diving deep, as if playing a little game of hide-and-seek. Rolling through the busy, working harbor on the double-decker Seagull II, a small sightseeing boat run by the local historical society, the salty stretch was busy with activity: barges pushing by, a dredge making a channel along the sandy bottom, and ferries shuttling cars back and forth to the Bolivar Peninsula.

“We have as many as 1,200 dolphins around the island, and our driver here, he’s a dolphin whisperer,” Brian, the friendly guide, said as we reached the end of the harbor.

With bigger waters ahead, we made a slow turn, pausing to snap a few photos of a sunken, scuttled ship, the USS Selma, one of just a few in the world ever built out of concrete (fewer still are intact and visible). Making our way back to the dock on this small voyage, we all hoped for another, better visit from our aquatic friends.

“Just keep your eyes open,” Brian said. “They like to play—maybe they’ll be here soon.”

I was in Galveston, which was once the largest city in Texas. Set on a 64-square-mile barrier island about an hour southwest of Houston, the port here once shipped cotton across the globe and brought in immigrants from around the world, enriching the city with both wealth and diversity. Known as the Queen City of the Gulf, you’ll find 32 miles of beaches and a sea wall that stretches more than 10 miles.

You’ll also find a sophistication that reaches back to those heady days at the end of the 19th century: in the East End Historic District, the greatest collection of Victorian homes west of the Mississippi, and downtown, The Strand, where trolleys roll by and horses pull carriages past a graceful collection of shops and restaurants.

Now home to about 50,000 people, the whole place was almost swept away in The Great Storm of 1900, which remains the greatest natural disaster in U.S. history. In an age before meteorologists and trackers could pinpoint the location and ferocity of a disturbance, most locals and tourists decided to remain on the island, despite warnings. The result was absolutely catastrophic, with about 8,000 people dying and most of the buildings being leveled—just block after block of complete and total devastation.

And while the event may have stunted Galveston’s development as one of the state’s leading cities, it bounced back, building the seawall and raising the entire city by about 17 feet. A relative handful of buildings survived the storm, including the one that now houses the Bryan Museum. Originally built as a children’s home, museum curator Eric Broussard said the entire neighborhood went there for shelter against the storm.

“Before 1900, this city couldn’t be matched for imports and exports and overall wealth,” Broussard said. “This was the Wall Street of the South.”

All of those who hunkered down in the building were unharmed.

“This place is a beast—I’d happily ride out a hurricane here,” he said, noting the 26-inch walls.

Now the place is home to the private collection of J.P. Bryan, who started amassing artifacts on Texas and the American West when he was just 10 years old. It includes 70,000 different items, including some true gems—a card bearing Geronimo’s signature, the sword used to capture Santa Anna at the Battle of San Jacinto, and the ransom note he penned, under the supervision of Sam Houston.

It’s just one of several historical encounters during my five days in town. At the Bishop’s Palace, I admired the craftsmanship of some of the country’s most talented builders and artisans as they raised a 52-room mansion, the most lavish residence in Texas when they finished in 1892. Grand, the greatest beauty and fascination is in the details—a tub that has three faucets (one for rainwater, said to be better for washing hair), hand-painted stained glass, a marine theme with carvings of Neptune in the wood and stone work.

Surrounded by water, I spent plenty of time by the sea.

Along the Gulf Coast, I walked miles on the seawall, checking out the rides and carnival attractions at the Pleasure Pier, popping into Murdochs, a massive gift shop suspending over the ocean entirely on stilts.

On the harbor side, I visited the small, remarkable Texas Seaport Museum, which takes you on a Trans-Atlantic voyage in steerage, from the queasy weeks below deck to arrival and entry into a bustling 19th-century Galveston. Next door, I walked onto the 1877 Tall Ship Elissa, a Scottish vessel that actually visited Galveston twice, dropping a cargo of bananas from Mexico on one trip. Touring the engine room and officer’s quarters down below, I emerged topside and met up with Ryan Bradfield, the ship’s bosun, who said they still sail this restored vessel—for day voyages, as well as trips as far away as Florida.

And I took my own little expedition. As the Seagull II steamed back toward the dock, they came. First one or two, then maybe a dozen happy little Atlantic bottle-nosed dolphins, popping up next to the boat, then surfing in its wake, bringing smiles to everyone on board. It’s a fun, fanciful way to finish a visit to this Texas beach town that’s filled with surprises.

Getting There: The easiest entry is through either of Houston’s airports—the closest is William P. Hobby Airport (airport code: HOU) on the south side of the city. From there, a rental car, rideshare, or shuttle will get you to the island.

Stay: Just one block from The Strand, within easy walking distance of shops, restaurants, and the attractions at the harbor, the Tremont House Hotel is housed in an 1879 building and maintains a feeling of historical elegance. Rooms and suites include modern conveniences, and there’s a cool rooftop bar overlooking the historic district, cruise port, and busy harbor.

Dine: Originally an 1895 bank, Riondo’s Ristorante serves some of the very best Italian food in Texas. Fish are brought in fresh from the Gulf, and almost everything is made in-house, from breads to sauces and even beef, which is sourced locally and ground on site. Ask for a table inside the original bank vault, and dine on pillowy, perfect gnocchi, made from Chef Rico Caminos’ 200-year old-family recipe.

Take Note: While it may not seem like the most interesting theme, the Ocean Star Offshore Drilling Museum is actually fascinating, a good introduction to energy production in Texas, and provides a relatively recent history of offshore extraction, all housed in a real 1970s rig.