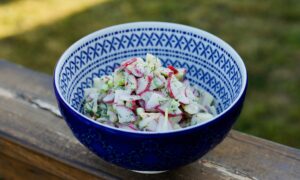 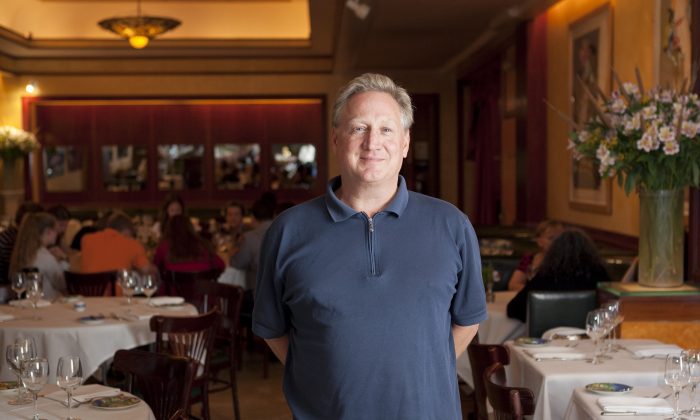 NEW YORK—Restaurateur Gabriel Aiello may be the first in his family to get into the restaurant business, but food is etched into his DNA. His Swedish great-grandparents were cooks to the kings and queens of Sweden and in a way, he continues that tradition by serving food to celebrities and powers that be, America’s own version of royalty.

Few restaurants in New York City have the same kind of staying power as the restaurant he named after himself, Gabriel’s Bar and Restaurant.

Aiello, 54, will regale you with stories: of Liam Neeson finding out about his Oscar nomination for “Schindler’s List” while sitting in Aiello’s office; or Mayor Bloomberg and Gov. Cuomo sharing their first one-on-one dinner; or three Supreme Court justices on their way in to dine.

“That’s a scary phone call,” he said. “‘Gabriel, there are eight federal marshals and they want to talk to you.’ And I said, ‘What did I do?’ … What did my son do?” (They were coming to sweep his restaurant before the justices’ arrival.)

Gabriel’s is without a doubt a power spot, where deals are made and business relationships are cemented or broken. Disney and Pixar may well have parted ways over the dining table at Gabriel’s. The latest cast party Gabriel’s hosted was for “Les Miserables,” where all the cast, minus Russell Crowe, were in attendance.

“So you have this history with giants. They’re in your living room, so it’s kind of fun,” Aiello said.

Ever since Martin Scorsese’s 50th birthday party 20 years ago, he’s been tapped by the media and entertainment industry to host private parties.

Gabriel’s is also where diners flock before heading to a show at Lincoln Center, a place for tourists, and a place Upper West Siders frequent.

“Everyone thinks it’s a neighborhood place,” he said. Meanwhile people like Mark Cuban, Oprah, and Bob Iger are regulars. Last year, Iger, who runs Disney, told him, “Gabriel, do you realize I had my first date with Willow Bay here?”

Changing the Dining Out Experience

Aiello strives to treat everyone who walks in as a celebrity.

“When you have a restaurant, and you have Mayor Bloomberg having his board meeting here and Oprah …These are people who are tremendously successful, they can go anywhere. It’s a great thing. They’re very comfortable here, but also we want everyone to feel comfortable here.”

When he was working at Tribeca’s renowned Arqua more than two decades ago, dining out was a whole different experience. It was a formal affair, intimidating, and “snarky,” said Aiello—to the point you felt like restaurants were doing you a favor, not the other way around.

“Italian food was tuxedo, not casual. Arqua and Mezzaluna were the first to be casual, smart, and competent. It was just about great food.”

A few days after opening, Bryan Miller from the New York Times came in with Tim Zagat and Miller wrote an article saying it was the best pasta in town. “So we were off to the races,” Aiello said.

At Arqua, they made their own pasta and ice cream, simply because they couldn’t afford to buy them.

Aiello has a knack of making you feel comfortable, but as with great restaurateurs, he also has keen business acumen. He’s also worked as waiter and maître d’ before opening Gabriel’s, which gave him an advantage—not only in understanding the needs and requirements of each position but also a feel for the stressors of the job.

Perhaps that’s why 7 or 8 of his 51 employees have been with him for the 23 years Gabriel’s has been open—something remarkable for an industry where high employee turnover tends to be the norm. Count the ones who followed him from Arqua and it’s closer to a 27-year relationship.

“Hopefully they make themselves irreplaceable and they take it a little further. I don’t demand it, but I like to see it,” Aiello said.

The restaurant closes for Thanksgiving—it’s Aiello’s favorite holiday and one his grandmother loved to cook for. He gives his employees an organic turkey and sends them home for the holiday. It was hard for him to say no, but he turned down hosting Oprah’s philanthropy board meeting once because it was on Thanksgiving.

If the restaurant business is an indicator of how the economy is doing, a little hope can be taken from Gabriel’s. The restaurant was booming up until 2009, when the private party business disappeared. “It wasn’t politically correct to have an event,” said Aiello. “Now it’s back full force. Business has been good.”

As his three children grow older, Aiello relishes having more time to take on new challenges. For years he said no to proposals: a Gabriel’s on 42nd Street with Disney, a Gabriel’s at Rockefeller Center.

But now he’s looking to branch out: perhaps a Gabriel’s in Las Vegas, coffee shops in the city (zinc bar, beverage-driven), a jarred tomato sauce. And another long-term project close to his heart: an organic tomato sauce priced attractively for public schools, free of all the junk that normally goes in it.

There’s a wide world of opportunities ahead for Aiello, but he remains anchored by everyone and everything he looks after and cares about: his customers, his staff, his family. Right now it’s about 9 p.m., and there’s a chocolate Labrador waiting for him at his Upper West Side home who needs to be walked.

But he never leaves the restaurant behind entirely. Later, it’s likely he will call in, but not to ask about the dollars. He’ll call to see if there were any speed bumps, as he calls them, or anything that needs to be fixed. After 33 years in the business, that’s just in his nature.

Aiello’s stories almost make me forget about the food. But that would be a mistake. Aiello has chosen northern Italian fare for its simplicity and goodness.

The dishes are executed beautifully, and the seasoning on point. I often have a quibble with dishes that are too salty, but all the dishes I tasted on a recent visit were seasoned with a deft hand, allowing the ingredients to shine on their own.

Aiello has been a foodie from a young age, influenced both by his family trips to Italy (his father is from Capri), and his grandmother, who was living with the family in Westfield, N.J.

“My grandmother would turn around and make a chicken dish and garlic mashed potato and chocolate cake for dessert—on a Monday. So I’d come home at 3 o’clock or 3:30, I’d see my grandmother working and I would help her a little bit,” he said.

Gabriel’s has been around for a long time. So when things ain’t broke … well, Aiello knows when not to tinker with things when they work just fine. The chicken dish here, has been the same as it was on day one, 23 years ago. From the restaurant’s wood grill, the baby chicken marinated with lemon and rosemary, with sides of garlic mashed potatoes and grilled broccolini, was delicious.

But the menu also changes seasonally. When Aiello got his hands on some excellent mangoes, they not only went into the Bellinis, but also into a topping that married well with a halibut fillet and sides of sweet zucchini.

The appetizers too, from the Caesar salad, to the bruschetta, to the buffalo milk mozzarella and cherry tomatoes, were all balanced perfectly.

The pastas are made in-house, and when I was there, had ravioli filled with butternut squash, drizzled over with brown butter. Simple and elegant.

The gelatos and sorbets, made in-house, are nothing short of superlative. They remind me of Berthillon’s ice cream in Paris, encapsulating the essence of the fruit or ingredient—in this case, blood orange and mango. Aiello said he makes a wonderful iced tea version as well.

Sometimes Aiello’s children ask him who came into the restaurant that evening.
“I went home and my son Gabriel said, ‘Who was in tonight?’”
“Oh, Paul Newman.”
“I’d love to meet Paul Newman.”
“Gabriel, why would you like to meet Paul Newman?”
“Because I want to tell him how much I love his lemonade.”
Aiello continued: “So months later, Paul Newman’s back and I tell him the story, and Paul Newman said, “When I have my Hole in Wall Gang Camp, they think I”m the person missing from the milk carton.’”

Business deals are made at Gabriel’s, but sometimes things can go a little sour. Here’s a story from Aiello:
“We had a meeting here one time with Pixar and Disney years ago. The waiter said, ‘I don’t know what we did to this table at lunch, but no one’s happy.’ I went into the room and I said, ‘Is everything OK?’ They haven’t ordered. So they ordered. About 1:30, quarter to 2, everyone seemed to have a bad tooth or gas, they all left.
I take a taxi to pick up my son at school about half an hour later, and I hear Pixar has decided to detach from Disney. [I thought] That happened by me an hour ago!”