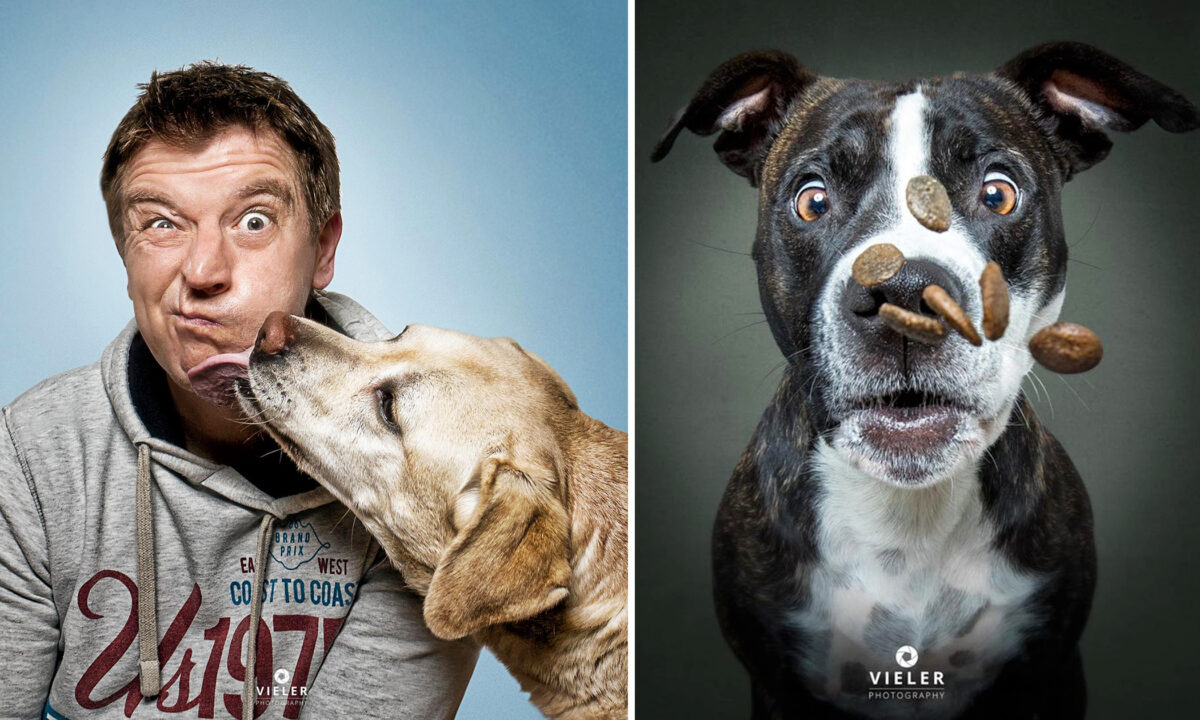 When Christian Vieler’s photos were shared by Justin Bieber online, he knew he was in trouble. Hundreds of requests for work from all over the world flooded the 51-year-old German photographer’s inbox—far more than he could handle.

Such is the huge appeal of images of dogs catching flying treats. With open jaws, poised to receive something tasty, the furry pets Vieler photographs make people laugh aloud with their comical expressions.

It started as a hobby, but when Vieler first snapped a dog lunging for snacks back in 2013, he knew he’d hit gold.

“I worked as a journalist for long years, and photographed dogs in my free time,” Vieler told The Epoch Times. “I often photographed my own dog when we were out walking. One day, I wanted her to move but she was very chilled. So I started throwing treats at her, just to make her do something. A few days afterward, I realized how funny the pictures turned out. So I stuck to it.”

For his snapshots, Vieler has to perfectly capture fast-moving dogs in sharp focus, with a flash. The result is a wonderful, ongoing collection he calls “Dogs Catching Treats.”

Vieler also had a massive impact on social media, with millions of shares across the globe.  After a while, posting on photo forums and his social accounts, Vieler’s work caught the attention of a press agency. “They came to me and said these shots look really good,” Vieler said. “Let us try and sell them to our clients. I had nothing to lose, so I said okay—good luck.”

In a matter of days, there was a monumental response. In just one week, Vieler’s dog photos appeared on the websites of National Geographic and several mainstream online news media.

“From one day to another, the whole world printed these pictures and paid attention to them,” said Vieler. “At that point, at the end of 2015, I was still a hobby photographer. But that success pushed me to go professional.”

For Vieler, every new dog is an individual. And just like humans, each has emotions that come out in certain moments, leading to new results and new, fantastic expressions.

By always focusing on the head of the dog, Vieler says he captures the best part: their expressive faces. Because of the treat-grabbing action, Vieler says, dogs open their eyes wide, revealing more of the white.

“This makes them look more human, somehow”, he said. “You have the feeling that you can see these emotions like pain, joy, desire; I want a treat, I want that treat.

“I think everything we love about dogs is something we will see in the eyes and in the face.”

The work is not always easy. Sometimes, a dog is frightened and Vieler can’t photograph using a flash. If a dog is in panic mode, he’ll stop shooting.

“Mostly though, I can work with the dog, and surprise the skeptical owner with a hopefully really great snapshot,” Vieler added.

Sometimes, a dog will just seem made for the camera—such as the Great Dane from Switzerland, Great Dane Bobba, whose picture Vieler credits with being his signature shot.

There are a few little techniques, such as playing with lens size, that can be used to enhance a dog’s features, giving it a funnier look. What Vieler really focuses on, though, is making the images as sharp as possible.

“I use a really close aperture,” he revealed.

The distinctive sharpness and details have not only won Vieler hordes of social media fans, but have helped land him two book deals. He plans on coming to New York and Los Angeles this year to shoot for his books, in addition to continuing studio shoots for clients.

Also due to marrying his partner, Linda, this year, life is good for Christian Vieler. Perhaps the key to a happy life is to produce something that promotes joy; Vieler certainly thinks so.

“As long as clients ask for pictures, I’ll never stop,” he said. “I’m very grateful that I’m able to work with dogs and dog-friendly people every day, and that I can be creative all day. It’s always a cheerful and joyful reaction to my pictures, and it’s very cool to see people react very kindly to my art—it’s really heartwarming and gorgeous. It’s the best thing.”