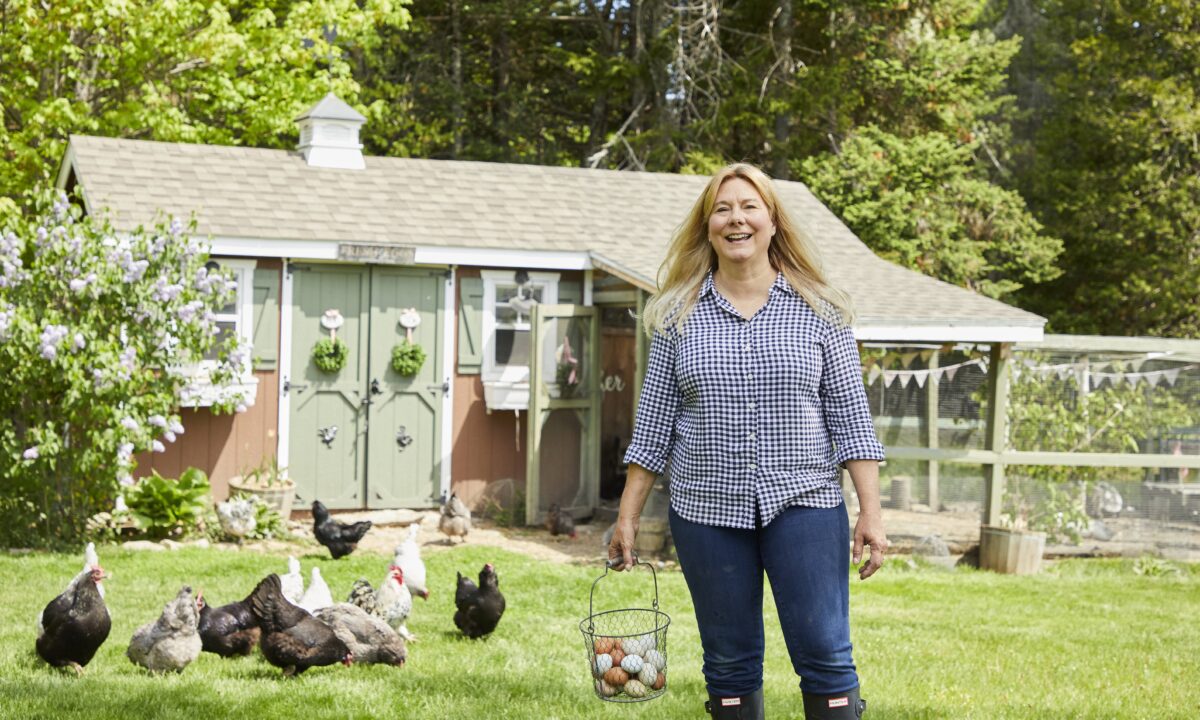 Known for her creativity and impressive DIY skills, Steele has transformed her coop into a showcase.
Food

From Wall Street to the Farm: Meet America’s Most Beloved Chicken-Keeping Guru

Lisa Steele, a country girl at heart, left the flashy world of high finance in New York City to return to a simpler, rural life reminiscent of her childhood days on the farm.

Now she’s a veritable chicken influencer with her own brand, Fresh Eggs Daily, with more than 2.4 million unique visitors to her site per year and a social media following of more than 900,000 fans.

Far more comfortable in her current “business” suit of flannel shirt, jeans, and chicken-print muck boots, Steele says taking that “huge detour” to the big city helped her to truly appreciate this life she’s created. “It feels like coming home,” she said.

A ‘Detour’ and a Homecoming

A fifth-generation chicken keeper, Steele grew up in Oakdale, Massachusetts, surrounded by chickens at her home and across the street at her grandparents’ chicken farm. She remembers how her mother and grandmother fed all of their food scraps to the chickens to help keep the cost of feed low, a habit she carries on.

She has fond memories of helping her mother make all their meals from scratch, eating fresh produce from their large vegetable garden, searching for bargain toys at Saturday morning yard sales, and for a special treat, enjoying homemade root beer. That modest yet idyllic childhood helped play a big role in shaping the values and lifestyle Steele cherishes today.

Fast forward to her 20s, and Steele had moved to Long Island, New York, and landed a job on Wall Street. It was exciting, yes, but also unbelievably exhausting. So she quit.

After a few years of running a bookstore next to the train station, she met her future husband, Mark, a navy man stationed in Pensacola, Florida. Steele eventually sold her store, and the newlyweds settled in Florida.

When they relocated to Virginia in 2009 for Mark’s final naval post, Steele wanted to raise goats. Her husband, leery of the mischief they’d cause, suggested chickens instead. She got her first batch of baby chicks from the feed store, and it was love at first peep.

Steele recalls the happy day she found the first egg in one of the nesting boxes.

“I called my husband at work, and I just blurted out, ‘Orange Chicken laid an egg!’ There’s this silence, and all of a sudden he says, ‘I’m in a conference and you’re on speakerphone. Can I call you later?’ And he said he literally never lived that down. The women at work used to bring him little bags of scraps and he would have to bring them home for my chickens.”

That love eventually grew into the Fresh Eggs Daily Facebook page, a name Steele recalls choosing “quite randomly.” Chicken enthusiasts from far and wide flocked to her page seeking tips and advice, eager to learn more about her all-natural chicken-keeping philosophy, which includes adding nutrient-rich fresh herbs to their feed in order to boost immunity. When she realized people were asking many of the same questions, it inspired her to launch a blog.

Today, her Better Homes and Gardens award-winning blog is the go-to resource for readers around the world who want to raise their chickens the natural way. Steele also shares recipes, gardening tips, and a variety of DIY projects for both home and coop, from beeswax egg carton fire starters to seed packet chicken coop bunting. She’s since added ducks and geese to her flock, and yes, you’ll also find helpful advice for raising these water-loving birds.

The blog led to Steele’s first book, “Fresh Eggs Daily: Raising Happy, Healthy Chickens Naturally,” in 2013. The dedication reads: “To my grandmother, who passed down to me her love of chickens and all things country.”

Steele began cooking eggs and baking all kinds of goodies with her mom when she was young. So it’s only natural that her latest endeavor is a cookbook.

“The Fresh Eggs Daily Cookbook: Over 100 Fabulous Recipes to Use Eggs in Unexpected Ways” is eggstraordinary, and overflowing with Steele’s expert advice for buying, cooking, and preserving eggs (did you know you could freeze whisked eggs—with a pinch of salt to preserve their texture—in an ice cube tray?). Recipes include classic egg dishes, such as eggs Benedict and quiches, along with ones with a twist, such as scrambled eggs with chimichurri, a zesty Argentinian herb sauce.

The Sips and Nibbles chapter is like a mini menu for an afternoon break. Refreshing cocktails, such as Steele’s “sunny-side up” sidecar and a classic egg flip, pair well with egg-centric snacks such as deviled eggs or refreshing lemon basil bars.

Steele also hopes to shine the spotlight on the egg’s starring potential at the dinner table. “I hope that people will think of eggs as more than just breakfast food,” she said. “I feel like having an omelet for dinner, with a side salad, that’s a really nice dinner.” Other dinner-worthy dishes include baked eggs marinara; avgolemono, a Greek egg-lemon soup; and egg yolk ravioli with a genius weeknight shortcut.

In the Sweets chapter, Steele’s favorite, you can satisfy your sweet tooth with her lemon blueberry whoopie pies, angel food cake, mint white chocolate ice cream, and so much more.

A Day in the Life

In 2015, the Steeles moved up to a small town in Maine where they share their quaint farm with their menagerie of animals: 18 chickens, 10 ducks, two geese, a corgi, and a tuxedo cat.

Steele, often up before sunrise, enjoys the quiet to sip her coffee, check emails, and wake up gradually before tending the animals. Once the sun’s up, she moves into chores mode and heads to the coop to let everybody out for the day. She likes to do a quick check to make sure they all look OK, often shadowed by her happy-go-clucky sidekick: a Splash Marans—a white hen with light gray splotches all over—named Miranda.

“Although you’re not supposed to play favorites, I think Miranda is my favorite,” Steele said. “She is just the sweetest hen, almost like a puppy in how she follows me around when I’m outside.”

Steele is very active on social media and graciously takes time every day to answer questions, swap chicken stories with readers, and share amazing photos and videos of the beauty, joys, and comical moments of life on the farm. A recent post captures Charlotte, an Australorp, looking over her shoulder, wondering, “Do these feathers make my butt look fat?” Others show her geese in dynamic-duo mode on self-appointed guard duty outside the chicken coop, or a mama hen caught tossing straw onto her babies after they refused to huddle underneath her.

Known for her creativity and impressive DIY skills, Steele likely has a project in the works at any given time. She’s transformed her coop into a showcase, with hand-built nesting boxes adorned with homemade blue and white checked curtains that brilliantly clip off for easy washing, country-style welcome signs featuring every bird’s name, and wreaths in the windows.

In her downtime, Steele loves to knit, read novels, and bake—“I find it so relaxing,” she said. You’ll also often find her spending time outside, walking in the woods or on the beach. She and her husband spend the evenings watching a movie, playing games of Cribbage, or simply sitting and watching the chickens wander while sipping one of her signature cocktails.

“It’s amazing how pet-like chickens are, and how, as much as it’s hard to go out there at times when it’s cold and dark or raining, as soon as I get down there, it’s just so pleasant to be around them and watch them,” Steele said.

“I feel like they lower my blood pressure. I think because they live so much in the moment, like they’re entirely concentrated on what they’re doing right then, that they kind of make you do the same thing. You just focus on that moment with them, which I think is really healthy.”

Do you know how old the eggs you’re buying really are? Lisa Steele shares her expert advice.

Karen Doll
Follow
Karen Doll is a freelance writer and homeschooling consultant based in the small village of Wassergass, Pennsylvania. She enjoys writing about homeschooling, gardening, food and culture, family life, and the joys of chicken keeping. Visit her at AtHomeWithKarenDoll.wordpress.com
SHARE
Friends Read FreeCopyFacebookTweet
You May Also Like