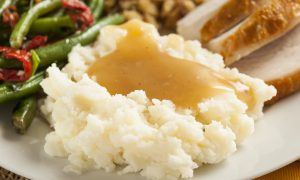 How to Make Mashed Potatoes for Thanksgiving: Recipes From Scratch, With and Without Skin and Milk, etc
0
Share Now
FacebookTweetParlerEmail
Copy Link 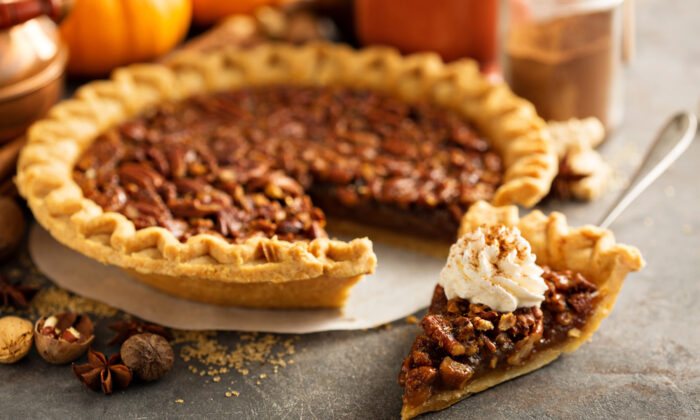 This Thanksgiving, we’re holding onto our loved ones, and the cherished traditions that connect and comfort us, a little tighter. In that spirit, we asked readers to share their families’ most treasured holiday recipes and the stories behind them. Here are a few of the answers we received.

My family’s treasured recipe is for pumpkin pie. This recipe comes from my great grandma (my dad’s grandma) who died about 40 years ago. It is unique due to the amount of cinnamon it calls for. This is not your usual orange pumpkin pie; it gets its color from the cinnamon and is therefore brown. The other oddity is the pepper. I do not add it when I make it.

After my mom and dad got married, my mom asked Grandma for the recipe. She said she didn’t have one, that she just put it together. The recipe exists because my mom watched Grandma make the pie and measured everything as she put the filling together. It was only made at Thanksgiving, so it was almost more treasured than the turkey.

Here is the recipe. I hope it makes your paper. I am the only one in my family that continues to make it, and it would be a shame for this unique recipe to be lost.

Put the pumpkin into a 2-quart saucepan. Add the cornstarch and mix well.

Mix spices with the sugar by stirring with a fork. Add this to the well-beaten eggs and stir until well mixed.

Add this mixture to the pumpkin.

Add the milk and stir until well mixed. Mixture will be very thin.

Heat the mixture over a high heat until it boils softly. Reduce the heat and continue cooking until the mixture gets thick. Stir often.

Fill pie shells and bake at 375 for about 55 minutes, or until a butter knife inserted in the center comes out clean. Due to length of cooking time, it is best to cover the pie crust edges with tin foil or a pie crust baking cover.

Green Beans Unlike Any Other

As a child of a single mother, growing up in the mountains of North Carolina in the ’50s, I never knew hunger. My mother was self-sufficient and independent, working for a small wage every day. She would often say, “I’ll starve to death before taking welfare.” At that time, welfare was a dirty word, a shameful act.

Mother had family and friends who each summer shared with us their garden bounty. Her canning jars would be full of wonderful food to sustain us during the winter. One of those delicacies was white half runner green beans. The taste is unlike any other green bean. Each Thanksgiving for all the years I can remember, those particular green beans were on our table.

After my mother passed, I began the tradition of growing or purchasing white half runners to can in the same old-fashioned way my ancestors had used. Now, 70 years later, my family expects and appreciates those white half runners sitting in a place of honor on our Thanksgiving table. I always think of my mother when I serve them—a woman who taught me that work leads to not only a full belly, but self-reliance.

This is a salad recipe my grandma would make for Thanksgiving and Christmas, and for special church potlucks or socials throughout the year. It goes back decades.

After suffering a stroke, our grandma went to live in a nursing home in another state, and my sister took over making it. Now, the evening before Thanksgiving, we enjoy sitting around the table, chatting and chopping, preparing the ingredients and catching up as a family.

Grandma passed away in 2011. Making this salad each holiday makes us think of her with each bite.

In a deeper 9 x 13 baking dish or other similar dish, layer the iceberg lettuce, celery, bell pepper, onion, and frozen peas. Spread the mayonnaise over the peas. The peas will show through somewhat, and that’s just fine. Sprinkle the cheese over the mayonnaise and cover with lid or plastic wrap. Refrigerate overnight and serve the next day.

Notes: Imitation bacon bits are optional as a topping. Using a clear dish makes it fun to see all the colorful layers.

On Thanksgiving and at Christmas, my mother would always have the best pecan pie. Very seldom was there any left after our meal. For years, my wife of nearly 50 years would ask my mother for the recipe, but my mother somehow would avoid giving it to her.

Finally, one Thanksgiving, my wife told my mother that she wasn’t leaving until she gave her the recipe. Whether it was the fact that my wife said that, or that my mother felt it was time to give up her secret (I tend to think the latter), sheepishly my mother wandered over to the trash can and pulled out a box that said “Edwards Pecan Pie.” The laughter that ensued from this discovery was overwhelming. For so many years, she had let my wife think it was a secret family recipe when she had just been buying them in the frozen food section of the grocery store.

My mother has been gone for over 10 years now, but her secret recipe still lives on at our Thanksgiving and Christmas dinners. She still brings laughter to us even after being gone so many years, and every time I eat pecan pie, I remember how much I loved and miss her—and the look on my wife’s face when she learned her secret.

From Georgia to Ohio—to the Internet

This dish has been on our Thanksgiving table for at least 45 years. Originally, it came from my Aunt Millie, who lived in Georgia. Being from Ohio, it was a true taste of the South.

Everyone loves the recipe because it is so easy to make. More importantly, everyone who eats this side dish loves it and asks for the recipe. We just saw it in a blog my wife follows that posted the recipe for Thanksgiving. I gave that individual the recipe 30 years ago. Not surprisingly, they have been serving it ever since.

Mix together and sprinkle on potatoes.

Bake at 350 degrees for 25 to 30 minutes. Should be bubbling around edges and pecans should be slightly brown.

We spent many Thanksgivings overseas, as missionaries in St. Petersburg, Russia, for 22 years (1993 to 2015). Our family loved to share Thanksgiving with our expat and Russian friends. One consistent favorite was my grandmother’s Sunshine Salad, a simple orange Jell-O salad with shredded carrots and pineapple chunks. It helped lighten an otherwise “gorge-ous” meal.

Two other traditions made Thanksgiving special: the readings of Presidential Thanksgiving Proclamations and the Three Kernels.

While we enjoyed George Washington’s proclamation (1789), Abraham Lincoln’s address (1863) held a special place in our hearts. We felt Thanksgiving was not only a historical and religious holiday, but our patriotic duty, as Lincoln had invited us, as “my fellow-citizens in every part of the United States, … and those who are sojourning in foreign lands to set apart and observe the last Thursday of November next as a Day of Thanksgiving and Prayer to our beneficent Father who dwelleth in the heavens.”

Before we indulged in a round of apple, pumpkin, and pecan pies, in order to allow our dinner to settle, we distributed three kernels of popping corn to each person, representing the strictest daily rations that the pilgrims endured during the winter of 1620. These were not for eating; rather, we went around the table sharing three blessings, three things we were thankful for from this past year. Combinations of blessings under elaborate categories were liberally permitted, for the more time we spent on our blessings, the more room we would have for the pies.

As we are experiencing strife and division, we pray now as President Lincoln asked us then: “with humble penitence for our national perverseness and disobedience, commend to His tender care all those who have become widows, orphans, mourners, or sufferers in the lamentable civil strife in which we are unavoidably engaged, and fervently implore the interposition of the Almighty hand to heal the wounds of the nation, and to restore it, as soon as may be consistent with the Divine purposes, to the full enjoyment of peace, harmony, tranquillity, and union.”