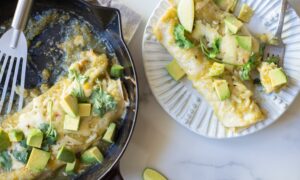 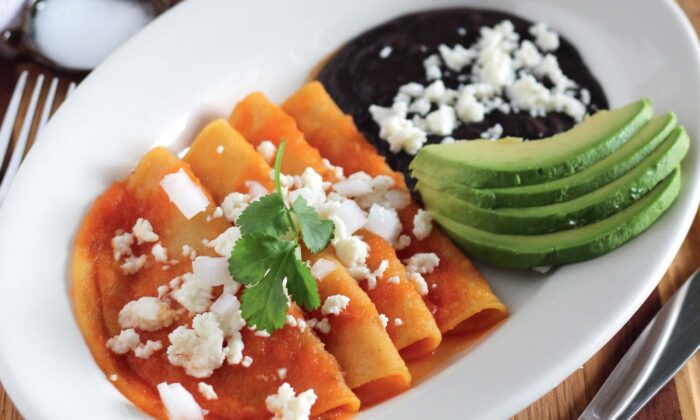 Entomatadas, corn tortillas that are folded or rolled, stuffed with cheese, and covered in a tomato sauce. were one of Martinez's mother's favorite quick and easy dishes to make for lunch. (Courtesy of Mely Martínez)
Food & Dining

From Mexico to Your Kitchen: Lessons From an Ambassador of Mexican Home Cooking

When Mely Martínez started her popular food blog, “Mexico in My Kitchen,” in 2008, she was thinking of her then-teenage son’s future.

She imagined him grown, married, and perhaps somewhere far from home, and “I wanted him and his wife to have somewhere to look for the recipes I made at home for him,” Martínez said. “That was my idea.”

In 2003, when she and her family moved from Mexico to the United States, she couldn’t find a cooking blog properly representing the food of her home country. So she eventually created her own, and began posting recipes for the traditional dishes she cooked for her family every day—comforting soups and stews, classic breads and cakes, the kinds you can find in home kitchens all across Mexico. With every recipe, she documented—and championed—Mexico’s colorful culinary heritage, especially reflecting regional influences from the many states where she had lived: Tamaulipas, Nuevo León, Veracruz, Puebla, Estado de México, Tabasco, and Yucatán.

Soon, Martínez began receiving emails and comments from other people’s sons and daughters: Mexicans now living in countries around the world, from the United States to as far as Germany, Russia, and Korea, who tell her that her recipes remind them of what their own mothers or grandmothers used to cook for them at home.

Nearly 12 years after the launch of the blog, Martínez has a loyal following, hundreds of recipe posts—in both English and Spanish—and a long-awaited debut cookbook, “The Mexican Home Kitchen: Traditional Home-Style Recipes That Capture the Flavors and Memories of Mexico.”

The book’s 85-plus recipes were selected based on their popularity on the blog, as well as how “traditional and commonplace they are in Mexican households,” Martínez said. They include staples like homemade tortillas, rice and beans, and various salsas; kid-friendly favorites like picadillo, sopa de fideo (noodle soup), and entomatadas (a simpler, tomato sauce-smothered rendition of enchiladas her mother frequently threw together for a quick meal); and more ambitious projects like mole poblano, tamales, or celebratory red pozole.

“[For] readers that are new to Mexican food, we wanted to give them the best insight into what really goes on in a home kitchen in Mexico. For the readers that come from Mexican backgrounds, we wanted to choose the classic recipes that they would most likely remember from their childhoods, and want to experience again in their own homes,” she said.

An Early Start in the Kitchen

For Martínez, tradition and family have always been at the heart of Mexican cooking.

Born and raised in the city of Tampico, Tamaulipas, in northeastern Mexico, as the eldest daughter in a family of eight siblings, she began helping out in the kitchen from a very young age.

She spent summers at her grandma’s ranch in the state of Veracruz, where cooking was a family affair, and a big part of their daily activities.

“It was a process that involved all the women in the family, each with a specific job in the kitchen,” she writes in the cookbook. “One would be preparing the salsa in the molcajete, another would be grinding the masa [corn flour dough] on the metate, and another would be making the tortillas while my grandma was cooking the main dishes. My job was to grind the corn.”

Later, she’d sometimes be sent to deliver lunch to the men in the family, who were working in the fields: bundles of freshly made corn tortillas, stuffed with scrambled eggs, made with eggs collected from her grandma’s hens that morning, and salsa, from tomatoes and peppers picked from her garden next to the riverbank.

Those summers “formed a part of my school of life,” Martínez writes, “as it taught me about cooking and being resourceful with what nature has to offer.”

Early on, she also nurtured a curiosity for how other people cook and eat.

“I was very curious about why people cook the way they do, why the same recipe tastes different when you go to a different house … I was always trying to find out about the cuisines of other people’s homes,” she said. That meant, she added with a laugh, “I always liked to taste other people’s foods, even when I was a kid. I liked to go to neighbors’ houses just so I could get invited to eat. My mom used to get upset with me because she said, ‘People are going to think that we don’t have food at home!’”

When Martínez began traveling further from home, she took her culinary curiosity with her wherever she went.

When Martínez was 20, she moved to a small rural village in the state of Tabasco, in the south of Mexico, to be a school teacher. She took the opportunity to travel throughout the nearby Yucatán Peninsula, talking to locals and learning about the dishes and traditions of the diverse regional cuisines.

“In every region that you go there, it’s like a different country,” she said. The food was no exception, with a huge variety of unfamiliar fruits and vegetables, spices, and seasonings, or familiar ingredients used in different ways—or not at all. (She recalls seeing a fence made from nopales, cactus paddles, a staple ingredient in north and central Mexico, and asking one of the local women why they didn’t cook with them. “Oh no, we don’t cook with them,” was her response, “we give them to the pigs!”)

After Martínez got married, her husband’s job allowed them to travel even more extensively across the country—all the while continuing to seek out new ingredients, taste new dishes, ask more questions.

“I like to spend time at the market,” she said. “I am that lady that goes and asks [all the] questions: ‘What do you do with that fruit? What do you cook with them? Can you find it the whole year, or is it just seasonal?’

“Or if I go to a small place to eat, I always ask, ‘Can you give me the recipe, or can you tell me what you put in the recipe?’ Most of the time, people like to share.”

Travel Through the Kitchen

Though Martínez and her family now live in Dallas, Texas, she still travels frequently to Mexico to visit. (She still loves going to the markets, especially for seasonal specialties—this fall, she’s looking forward to huitlacoche, also known as Mexican truffle, an earthy, sweet and savory corn fungus beloved as a seasonal delicacy.)

But for others who can’t do the same, she hopes to give them a little connection to home.

“There are Mexicans everywhere, and they miss the food,” she said. “I say, ‘If we cannot go to Mexico very often, we’re going to bring Mexico to my kitchen. That’s why the name of the blog is ‘Mexico in My Kitchen.’”

Of course, this culinary travel opportunity is open to anyone. Martínez’s recipes are just as valuable for Mexicans longing for a taste of home as they are for non-Mexicans looking for a reliable, encouraging introduction to bringing real Mexican home cooking into their own kitchens.

Often, Martínez noted, her readers are something of a mix of the two: non-Mexican women cooking for their Mexican husbands. “They want to please their husbands, and they want to cook for them the food they miss, so they visit the blog to make those recipes for them.”

Martínez offers a comment on one of her recipes as a revealing endorsement: “I made this for my Mexican husband, [and] his mom said that it tastes better than the one she made. My Mexican mother-in-law said I made it even better than she does!”