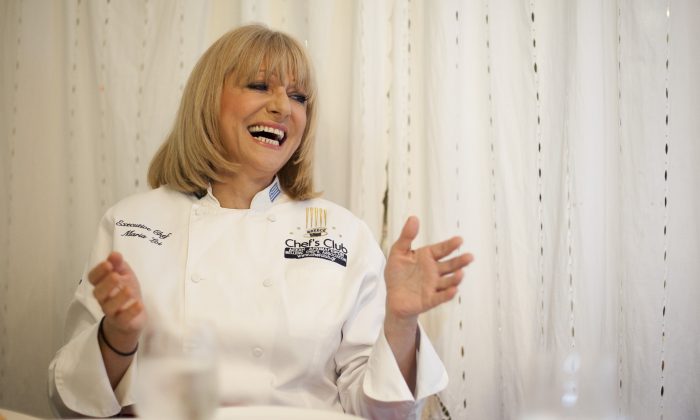 Maria Loi, executive chef and owner of Loi, is a fun-loving spirit who is always ready to share a laugh. (Samira Bouaou/Epoch Times)
Food & Dining

From Maria Loi’s Kitchen, Nourishment From the Gods

Maria Loi drops ancient Greek names (like Hippocrates) as easily as if they were neighbors back home. She quotes ancient Greek philosophy, “metron ariston” (everything in moderation), like a scholar. She has pored over the “Odyssey” and ancient texts, looking for clues on how the ancient Greeks ate. Ask her where “macaroni” comes from and you’ll never view the little pasta elbows the same way again.

Loi is not an academic, but she is a fountain of knowledge about Mediterranean food. Her wisdom proves highly relevant today, as the Mediterranean diet in recent years has emerged in scientific circles as one of the healthiest on Earth.

Now the owner and executive chef of Loi, a fine Greek restaurant on the Upper West Side, Loi had humble beginnings.

Her home in western Greece, Nafpaktos, lies between Delphi, the ancient site of the famed oracle, and Olympia, where the Olympic Games of antiquity were held. It’s a land of mountains, sea, and castles.

Loi’s childhood was very poor, but rich in family life. “I think the best thing I’ve done in my life was that I was very good to my parents,” she said.

Loi said her parents were very free spirits, raising five children who have very different characters. “And this is because of our parents. They were talking to us. No matter how tired they were, every night, we have to be together, we have to speak to each other.”

Now, every Monday, wherever they may be in the world, the five siblings catch up via conference call. “Now, it’s a lot easier with technology.” Loi coordinates the call time, this week juggling time zones between Greece, Florida, and New York.

It was also her family who taught her about Greek food—the healthiest of food.

She was the youngest, and at age 7 she started cooking for the whole family while they were out working in the fields. Her teacher was her grandmother and the recipes were passed down from her great-grandmother. She remembers making her first meatballs, using the same delicious recipe she uses at her restaurant today.

Healthy Inside and Out

Loi is passionate about Greek ingredients. These ingredients are not just about food. They are life-giving in many ways: nourishing the body as food and medicine, and what she loves to say “inside out.” A tablespoon of olive oil, for instance, can remedy digestive trouble or a few drops in the bath will give smooth, glowing skin.

Visiting Maria Loi is like visiting your mother. She entices you to eat, asks how you are, offers you some beauty secrets, and can’t help but tell you about old Greek natural remedies. “Three tablespoons honey and three tablespoons lemon juice, you have something antiseptic, and it soothes your throat—and also the antioxidants,” she said. “If you see at the pharmacies, you see lemon and honey.” Go into your own kitchen and put together your own remedy, she suggests.

My dinner companions were eager to be adopted by her. “She is nicer than my mother,” joked one of them. The other, whose mother lives in London, said, “We’re all orphans here, she can adopt us.” They both vowed to come back. The food was excellent of course, but I think Loi’s incredible genuineness has a lot to do with it.

At her restaurant, the dishes were all vehicles for these star ingredients. The fresh lavraki (or branzino) is flown in straight from Greece, and cooked so it’s moist and redolent of fragrant olive oil.

“We have two golds: olive oil and honey,” Loi said. Among the delicious mezzes, the dolmas (rice in grape leaves) were creamy, light, and excellent dipped in Greek yogurt and olive oil; the slow-cooked moussaka was indescribable. One cheese croquette was definitely not enough—they were so light, with a thin crispy coating yielding to a soft, savory blend of cheeses (feta, halloumi, and kefalograviera).

The yogurt made in-house, is like “ice cream, at room temperature.” Paired with honey from Crete, and beautifully presented, this simple dessert had such a pure, clean taste, it was one of the best desserts this sweet-toothed writer has ever had. Best of all: it’s healthy. Partly, because honey can be good or bad, of course. But like olive oil, or wine, terroir makes a huge difference: the confluence of where the bees travel, climate, soil, and factors that vary year to year.

But Loi is not saying all of these wholesome ingredients must be sourced from Greece. Honey from upstate New York, for example, is very good, she said. Ingredients should be as accessible as possible.

“Easy, tasty, healthy,” is how she summarizes her cooking.

Loi doesn’t say much about her accomplishments unless really prodded. She is a celebrity in Greece—until recently she had her own television show. She puts out a monthly magazine about cooking and designs her own line of home appliances and dinnerware there.

What about the time you cooked at the White House? I ask.

“I was asked by the White House to prepare a dinner for the Greek Independence Day last year,” she said. “When the president asked me, which room is nicer here, I said, ‘The kitchen.'”

She said President Obama was surprised at her response, but she said the people, especially White House executive chef Cris Comerford and pastry chef Billy Yosses, were what made the kitchen such a great place to work. “They’re really great people. I felt like I was working in my restaurant.”

Loi is an appointed international ambassador of gastronomy by the Chef’s Club of Greece. The president of the club, Miltos Karoubas, is “a very open-minded person,” she said. “When I say open-minded, the only thing he wants is to expand Greek cuisine, not because it’s Greek, but because it’s healthy. He believes it will help the world.”

Although Loi rubs elbows with dignitaries, elected officials, and other VIPs, she has a soft spot for children, the elderly, and those who are less fortunate.

She is someone who had nothing, then had it all. From working in tobacco fields, she went on to becoming a public affairs specialist and lobbyist for multinationals for 15 years.

As a wealthy jet-setter, she spared no expense shopping. “I was buying so many things. I was [like] a Christmas tree, with the jewels and all that stuff.”

Does she miss anything about her old life?

“No. Actually I love my old life because it taught many things—to do and to avoid. My life was very good but it was not for me. I was watching my life going through like a movie. I was not in that movie.”

And so, she returned to her hometown, reading, writing—but she was sought out by friends, family, associates, and found herself hosting—and feeding—50 people at a time. It was then that a friend suggested she open a restaurant in Nafpaktos.

Twelve years later, the restaurant is still there, now run by her niece.

Now, she says, she has all she needs. “If you tell me to buy clothes or something, I don’t need them. I always have my chef coat [on],” she said, drawing a comparison to a monk’s robe.

What she enjoys now is to make people happy. She is involved in helping children and elderly people, and most of her earnings go directly to them.

Loi was able to steer the ship of her own life, but she is well-aware many don’t have the same luxury. If she still shops these days, it’s for toys for children.

“I never grew up with toys, that’s why I love them now. … I had the joy of all the toys I was buying.”

Every few months, she hosts a meal, most recently on July Fourth, when 170 senior citizens came for a meal. “They didn’t have anywhere to go, it was really a pity.”

“I’m like a kid when they walk in here. I’m trying not to cry. I’ll never forget the lady, who said, ‘We don’t have to have tablecloths.'”

“I said, yes, you do. Today, you’re my guest, you know.” She made salmon and burgers for them, “whatever they like to eat. They love my lemon potatoes.”

Many of the seniors now walk near Loi’s restaurant—hoping she will get a glimpse of them and give them a little treat.

“I think that God gives you everything back when you give,” Loi said.

Loi has a few irons in the fire, including a cookbook about nutrition that she is hugely excited about. It includes about 100 recipes, advice about how to eat well and why. Her own line of pasta will be launched in Greece in 2014, along with other products. She talked of opening a second, smaller restaurant next year in New York—somewhere with cheaper rent than the Upper West Side, where she can offer excellent fine Greek food at a more accessible price point.

“If you can change the way we eat, we can change the world. We can change every night dinner in our house, you will see the difference in many fields—health … the hospital—we don’t have to go as often,” Loi said. “We will be happier. Because Greek food, it’s around the table all the time, they called it hestia, in ancient years. They call it the place where they [tend] the fire. Everyone is around the fire, eating, drinking, talking.”

At Loi on Monday night, in Maria’s company, we had our own hestia of sorts, sitting around the table, talking, laughing, eating, and drinking. Five hours passed in the blink of an eye.