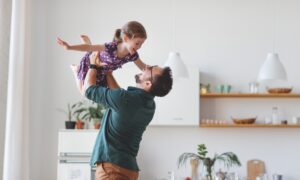 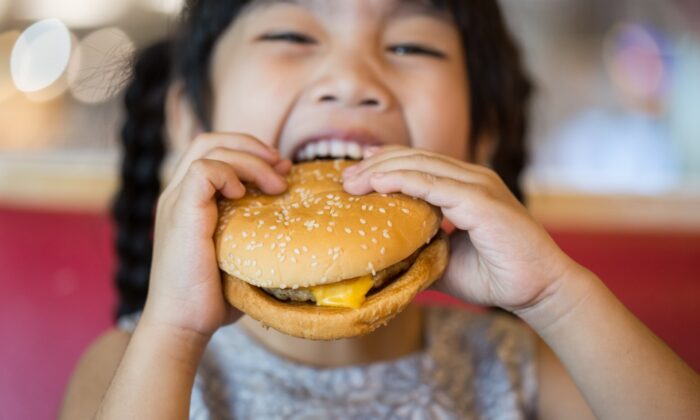 Nobody knows for sure who made the first hamburger, though several people claim to have done it. (Casezy idea/shutterstock)
Food & Dining

From Chocolate to Chicken Nuggets, a Bite-Size History of Favorite Kid Foods

Legend: Genghis Khan came up with an early concept for hamburgers that involved tenderizing meat scraps under the saddles of horses as his Golden Horde ransacked its way to China back in the 13th century.

Fact: Nobody knows for sure who first came up with putting beef patties between bread.

Such bite-size anecdotes are among the truths and folklore included in “There’s No Ham in Hamburgers,” a new book that serves up the history, science, and geography behind a myriad of foods beloved by kids. Burgers and fries are represented, along with chocolate, peanut butter, chicken, ice cream, and all that sugary cereal so many parents love to hate.

A history buff and promoter of reading for pleasure in schools, author Kim Zachman in Roswell, Georgia, wrote the playful, informative food dive for youngsters ages 8 to 12.

“I wanted to write history for kids and I wanted it to be really fun,” she told The Associated Press. “I was trying to think of ideas and I was out walking my dog one day, and I was like, why is there no ham in hamburgers? I’d always kind of wondered that. That’s when I found so many great origin stories.”

Some, she said, are untrue or unprovable. She also collected facts on nutrition and health, and included simple recipes and a single science experiment on how to extract iron from fortified cold cereal. The latter involves pummeling cereal into dust and then hovering a powerful magnet above the mess.

Zachman, mom to two daughters in college, doesn’t shy away from murky origins or multiple claims to innovations in her book, published by Running Press Kids. Nobody knows, for instance, the meaning behind the name Oreo, but one thing’s for sure: The Nabisco treats were a copy cat of the Hydrox sandwich cookie, which hit the market four years prior, in 1908.

“It was surprising to me how little we actually know about the origins of some of these foods,” she said. “We really don’t know for sure who made the first hamburger. Several people claim to have done it.”

In the 1500s, German sailors on trade ships crossing the Baltic Sea discovered raw meat patties in Russia. Back home, they tweaked the idea, frying the beef patties with sautéed onions. Sailors from other countries came ashore in Hamburg, the country’s most important port city at the time, and discovered “Hamburg steak.” In the 1800s, millions of Germans made their way to America and brought the Hamburg steak idea along for the ride.

Among those claiming to have invented the modern burger: “Hamburger Charlie” Nagreen, who in 1885, at age 15, was selling meatballs at the Outagamie County Fair in Seymour, Wisconsin. To make them easier to carry, he smashed them between two slices of bread and called it a “hamburger.” It was a hit.

“I thought it was interesting for kids to know that some things don’t just happen. That’s how the human species evolves. It’s not just one person who thinks of fire. It happens all over the place,” Zachman said.

A big takeaway for Zachman was exactly how long and laborious a process it is to produce vanilla, the second-most expensive spice behind saffron. The journey often starts on vanilla bean plantations in Madagascar, the world’s leading producer, and might end five years later in a pint of ice cream in America.

It takes four years for a young vanilla plant to produce a flower, and the flower lasts for just one day. Workers must pollinate and harvest by hand to produce the long pods, and pods are cured through an intricate process that takes six months.

“That blew my mind,” Zachman said.

The persnickety cacao tree was another mind blower. The tropical trees, from which chocolate hails, can’t handle direct sunlight, need rain year round, and take 3 to 4 years to produce blossoms that can only be pollinated by tiny flies called midges. Out of 1,000 flowers, just three or four will be pollinated and grow into seed pods, which take about six months to ripen. Chocolate is possible after seeds are fermented in a warm, dark place, dried in the sun, and roasted.

Who figured all that out? Ancient civilizations in Central America more than 3,000 years ago. Cacao seeds were so valuable that the Aztecs used them as money.

Zachman doesn’t ignore some of the big personalities behind popular kid foods, such as the brawling Kellogg brothers of Battle Creek, Michigan. Younger sibling Will Keith added sugar to their wheat (later corn) flakes to make them last longer and taste better. Older brother John Harvey, a doctor, health nut, and devout Seventh-Day Adventist, was furious, and the two ended their 25-year partnership bitterly in 1906, exchanging lawsuits for years after that.

The popularity of cold cereal coincided with the mass pasteurization of milk. In the beginning, many cereals were fortified with vitamins to battle rickets and other health issues for kids. Zachman is conflicted about the mass of sugar cereal became.

“I was telling my mom about this and she goes, ‘Yeah, it didn’t have a lot of sugar in it so we would always just sprinkle sugar on it,'” the 58-year-old Zachman laughed. “It’s later as the competition got worse and they started advertising to kids that the sugar got higher and higher.”

Processed chicken nuggets—boneless, breaded, and deep-fried—have only been around commercially for about 40 years, Zachman found. The trick, she said, was figuring out how to get the batter to stick throughout the freezing and frying.

One Robert Baker came up with the Chicken Crispie in 1959 at his Cornell University lab. But it was Fred Turner, chairman of the McDonald’s Corp. board in 1979, who got things rolling in a big way when he assembled the Chicken McNugget SWAT team after the U.S. government warned Americans to stop eating so much beef. In 1980, the McNugget was market-tested at 15 McDonald’s locations in Knoxville, Tennessee. Like Hamburger Charlie’s squashed meatballs, they, too, were a hit.

Zachman, taking into consideration the impressionable age of her readers, notes that deep-fried chicken nuggets can be high in cholesterol and saturated fats, and urges moderation. She offers similar health warnings for other foods, while also pointing out health benefits.

“I had a blast doing the research,” Zachman said. “I hope it sparks kids to go out and learn more about other things in their everyday lives.”