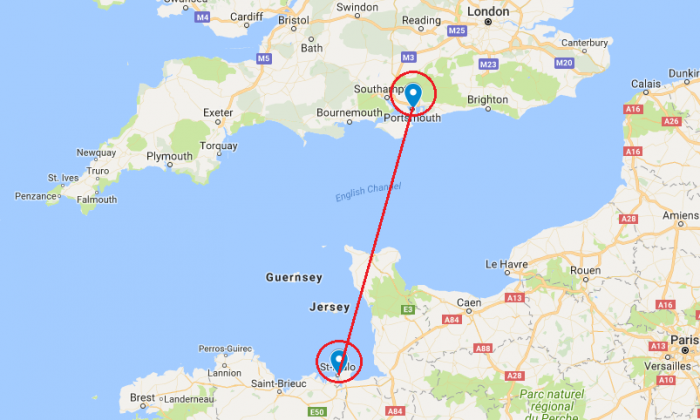 The trip Malo the cat took between the headlight and the car radiator. (Screenshot via Google My Maps/edit by The Epoch Times)
Animals

A kitten was trapped behind a bumper of a car traveling some 300 miles from St Malo in France to Portsmouth, UK.

Retired science teacher Doug Bliss and his wife Renee, both 68, were holidaying in St Malo, a port city in northern France. On their way back, possibly while taking a ferry to Portsmouth, a little stowaway hid in their car—and couldn’t get out.

On their way from the ferry to their home in Duston, Northampton, they started to hear faint meowing. But it didn’t occur to them a cat was actually in their car.

They only realized after they made a pit stop at Sutton Scotney Services between Andover and Winchester North.

“When we stopped at the services I couldn’t believe what I was hearing—meowing coming from the bonnet [hood] of the car, especially as we had just driven for almost an hour and a half without stopping,” said Renee Bliss, according to Blue Cross, a pet charity.

Unable to extract the kitten, they called Britannia Rescue that couldn’t get the kitten out either.

“He seemed to be trapped in front of the radiator behind the headlamp,” said Doug Bliss, according to The Daily Mail. “You could barely see him when he was trapped. I had to bend down and reach into the car from below just to touch him.”

The couple then took the car to the nearest garage, Bakers of Oakley, in Basingstoke. There they were able to remove the bumper and rescue the kitty.

The kitten was named Malo, like the city it probably came from.

“He’s absolutely gorgeous, and if we didn’t already have two rescue cats of our own, we would have jumped at the chance to take him on ourselves,” Renee Bliss said.

A local kennel quarantined Malo for 21 days and the Blue Cross then took it in.

“As soon as we met Malo we knew he’d be a wonderful addition to someone’s family. He’s had quite a journey to get here, so would love to find a loving home to settle down in and really be able to show his true colours,” said Lara Alford, Centre Manager at Blue Cross Southampton.

Malo will be assessed, neutered, wormed, and deflead before he goes to his new family.