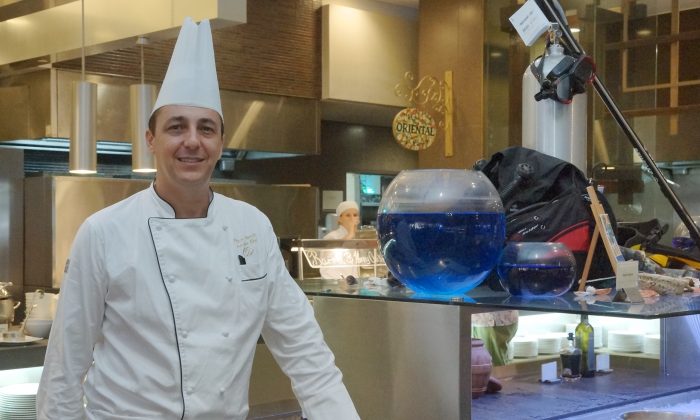 French Food: Passports Not Needed When You Use Your Taste Buds to Travel

BRISBANE, Australia—July is the month when our thoughts turn to tasting something French, in Brisbane it could be the allure of a French restaurant, an outdoor French festival or even a French hotel.

Epoch Times caught up with Brisbane Chef Patrice Falantin earlier this year to talk about French cuisine. He knows from interaction exactly what his guests like to eat. “People want to eat the real French food and want to eat the classical dishes that are on the menu for hundreds of years, because people know the recipe works, the ingredients work, and when you put together with proper technique, you arrive at a good product,” he said.

Falantin’s passion for French food and hospitality makes that a reality at Sofitel’s Thyme2 Restaurant. Falantin grew up in a hospitality family in Toulouse, France. He explains how he cultivated his passion for food while working and living in his family’s hotel, “Where I actually assist[ed] my parents … going to the market selecting the produce they want to put in the menu. Initially there was a chef running the operation and so I learnt a lot from him.”

During his years at catering schools Falantin experienced a Michelin star kitchen, he worked at the ‘Grand Eceuyenat’ in Coroles with Yves Thuries—”one of the best awarded chefs in France, also a pastry chef who actually won every single competition at (world championship level) in pastry, then he wasn’t allowed to compete anymore,” he explained. After years of working in Paris and London Falantin wanted to settle in one place and share the different styles of classic French cuisine. He chose Australia where he has now worked for 20 years. “I think the culinary journey stops. I think over the years, you understand there are some identity you want to show. And there are some recipes you found out and you want to recreate these type of recipes to share with your guests,” he said.

Different regions of France have different ideas about what is French traditional cuisine. Falantin is from Northern France and he said, “I grew up in this part close to the sea where there is a lot of fish, a lot of seafood … and all the fish and seafood are based in all the creamy and buttery sauce.” He explains that no matter whatever the region of France the recipe comes from, there is a need for the traditional approach, “The foundations are all the classical techniques, which will allow you to understand how the ingredients react with the technique, or the heat and how you are going to present it.” The traditional techniques will involve broiling, braising and roasting, especially braising and roasting using a lot of fat.

As to what the regional differences in French food are, he said, “the Northern part of France, North of the Rhine River, which separate the Northern and the Southern parts of France, has more butter and cream, while the Southern part is a lot more Mediterranean with a lot of olive oil and it’s a very different style of cooking. The 1,000 km (621 mi. 653.2944 yd.) distance between the north and the south have very different styles, the way they cook, the way they eat. Basically it’s richer in the North and lighter in the South.”

Although the preparation and techniques are traditional, a modern innovation—a circulator—is used in his kitchen to cook the food. Falantin explains, “It is a machine, [it] always circulates the water to a little bath to a certain temperature. That allows you to cook a lot more precisely, the fish the meat and some vegetables. To make sure you don’t overcook.”

The Thyme2 Restaurant has, as a part of its buffet, the pastry section where Didier Richeux, a renowned French pastry chef, recreates the French Boulangerie. Falantin said, “We’ve got different types of bread (dough imported from France), the bread loaf, the bread roll and different styles of bread just like when those you see when you go in a Boulangerie in France.” Of course, the breakfast favourite—the croissant, can also be found at the buffet.

Not only the French ritual of breads is available, but the other ritual in French food culture—the cheese ritual is presented. “We make sure there is always goat cheese, some brie, some manchego, [Spanish cheese] and smoked cheddar. We also aim to educate our customers [with] all the different cheeses we’ve got. It’s our signature to present different types of cheese here,” said Falantin.

For some, it might be the Thyme2‘s chocolate fountain, and the chocolate desserts and decorations, which are irresistible or the little traditional cakes like the black forest, mango mousse, or little slices in pastry and jelly, or the Chantilly cream and gateau. Whichever meal of the day you venture in to eat some traditional French food, there will be something familiar as well as something new for you to try.

If you have special dietary needs Falantin has that covered as well with his staff available to interact with guests, “For people who do have special requirement; or [are] allergic to certain food product; or with gluten free. They always want to know what they can eat and what they cannot eat because it’s always daunting to be at a big buffet restaurant not knowing what you can eat or not,” he said.

With reporting by Sybil Lee.

Thyme2 Restaurant now delivers a totally unique and inspiring dining experience, reflecting world-wide dining trends and the sophistication of the city and its cuisine. Sleek tandoori ovens, wood fired ovens and wok stations feature in the extensive choice of dining alternatives for breakfast, lunch and dinner. Enjoy the theatre and movement of an open-plan interactive kitchen and delight in watching our chefs cooking live.