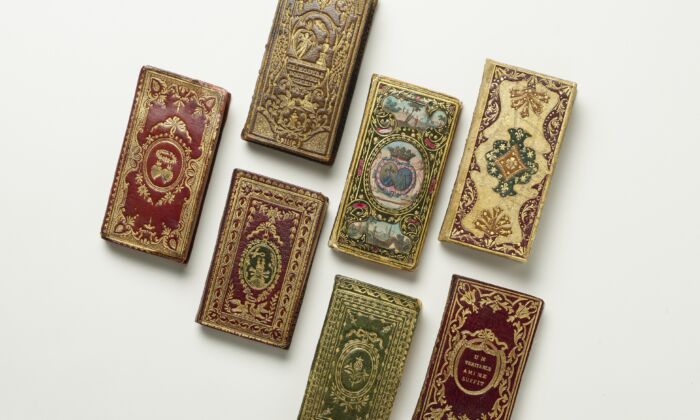 In 1966, Vogue photographer Cecil Beaton captured renowned art collector and philanthropist Jayne Wrightsman’s portrait. Just a year earlier, in 1965, Wrightsman had been added to the International Best Dressed List Hall of Fame. Fittingly, in the photograph, Wrightsman is pictured elegantly poised on a settee in her Versailles-esque New York apartment.

It was around 1950, in admiration of the art and interiors of 18th-century France, that Wrightsman and her husband, Charles, decided to decorate their homes in the French courtly fashion. They filled their homes with exquisite French paintings, sculptures, gilded furniture, and objets d’art—many once owned by kings, queens, dukes, and duchesses.

Among their displayed treasures, the Wrightsmans kept the most incredible book bindings, artworks in and of themselves and absolute monuments to fine French printing, illustration, and book binding. Mrs. Wrightsman was even admitted to The Roxburghe Club, an exclusive book and publishing society of only 40 international members.

The Wrightsmans interacted with their art and book collection in a unique way, explained The Morgan Library & Museum’s associate curator of Printed Books & Bindings, John T. McQuillen, in a video. “They really lived with their collections in a way that most collectors do not.”

McQuillen and his colleagues curated the Morgan’s exhibition “Bound For Versailles: The Jayne Wrightsman Bookbindings Collection” to celebrate Wrightsman’s bequest of books that were bound for the highest echelons of 18th-century French society. The exhibition highlights the importance of books in the French court and, in turn, showcases the virtuosity of the artists and artisans who made the opulent books, from their bindings to the engravings within. Visitors can meander their way through a series of rooms decorated with Wrightsman’s lavish books, and furniture similar to pieces once found in the Wrightsmans’ homes.

“As a whole, the collection highlights the best bookbinders of the era. It’s not only the book, the binding itself, but the decoration applied. And these are the best examples of this really highly specific, specialized skill,” Pine Tree Book conservation fellow Lydia Aikenhead says in a video.

In 18th-century France, exquisitely decorated books were meant to be seen, while understated books with highly decorative spines were intended for bookshelf display. The ornamental patterns on the borders of book bindings were even reflected in the motifs on the palace’s wood-paneled walls.

The opulent books in the Wrightsmans’ collection combine the highly regarded arts of literature and engraving alongside the fine craftsmanship of luxury binding. Many of these books were once used to gain influence and express appreciation. Nobles gifted bound volumes to their supporters and retainers; and authors, keen to garner favor at court, often dedicated their books to nobles.

Courtly life and notable court figures and events were commemorated in some books. A rare example in the exhibition is the sole surviving copy of “The Princess of Crete,” a music manuscript by court composer André Danican Philidor.

Engravings were particularly desirable. French fashion, architecture, and court spectacles were published in large-format volumes dedicated to illustrations alone. These publications were testimony to highly skilled engravers, such as father and son Charles-Nicolas Cochin the Elder and Charles-Nicolas Cochin the Younger. They could reproduce the subtle textures and shadings of drawings from great painters such as François Boucher and Jean-Baptiste Oudry.

In the 18th century, Paris was full of bookbinders’ ateliers (workshops), where teams of skilled artisans worked together to create exuberant book bindings. Attributing book bindings to particular ateliers is problematic, however. Artisans rarely signed their work, and binding tools were often shared among family members.

Traditionally, armorials (heraldic arms) were prominently displayed on the front cover. A man’s book was decorated with his armorial alone, while a woman’s book cover would display her family armorial on the right and her husband’s on the left.

The armorials were created with a variety of different tools to build up the design or they could be created using a single tool, a “plaque,” an engraved plate that when used with a press, gold-stamps the covers in a single impression. Armorials could also be painted, rather than impressed into the leather.

Commonly, book artisans applied gold leaf to the book cover in a process called “gilt tooling,” whereby gold leaf is laid on the cover and impressed into the leather by different tools, creating myriad patterns. The gilt-work process appears seamless, but there’s immense skill and craftsmanship involved, Aikenhead says in a video.

Other embellishing techniques led to equally lavishly bound books. Artisans created mosaic bindings, whereby contrasting colors or grains of leather were inlaid or overlaid on the leather book cover. For “inlay” mosaics, artisans cut a piece of leather from the book cover and inlaid a leather piece of the same size and thickness. For “onlay” mosaics, they added pieces of leather over the leather book cover to create a relief effect, similar to sculptural reliefs.

Some book covers were even more innovative: Pieces of leather were cut out, and gold and silver foil was impressed into the leather on a background of red foil. A protective layer of mica, which is a clear silica, was added on top of the reflective foil and painted decorations.

Artisans elaborately embellished every surface of a book, the spine, the page edges, including the inside cover. Lavish book linings or “doublures” were made of silk, vellum, leather, or gilt or marbled paper. Blue silk was a particular favorite.

Book designs ranged from simple to ornate, often echoing the opulent designs nobles owned. The small books were quick and inexpensive to make, and the production of pocket almanacs appealed to a new consumer keen to own these little, affordable luxuries.