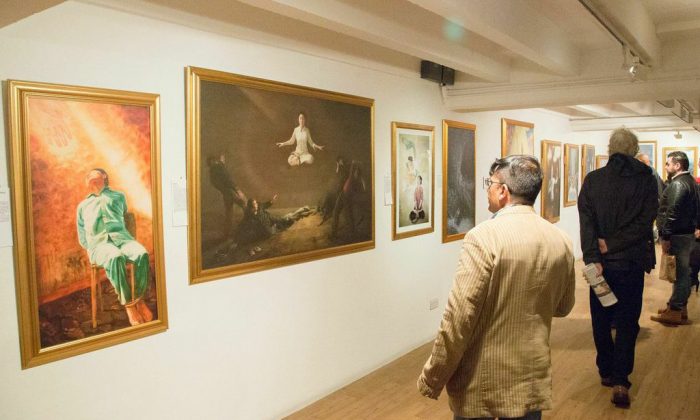 The interior of the Oxo Tower where a visitor contemplates Uncompromising Courage by Kathleen Gillis, 2004. Like most of the images in the Art of Zhen Shan Ren (Truth Compassion Tolrance) International Exhibition, the painting is a reflection of a true story. In 2002, Mr Liu Chengjun was sentenced to 19 years in prison for his involvement in broadcasting programmes in Northern China exposing the brutal persecution of Falun Gong. He died from torture in prison less than two years later. This is the Changchun incident mentioned by Ethan Gutmann in the article. (Simon Gross/The Epoch Times)
Arts & Culture

Freedom of Expression, Freedom of Belief: Art in London, Not in China

LONDON—When people view The Art Exhibition, they comment on the consummate skill shown in painting scenes of great human challenge with such uplifting dignity. They also remark on how the universal principles of the Chinese words Zhen Shan Ren (Truth Compassion Tolerance) are rendered by the artists in styles, techniques, and subject matter reminiscent of the Western Renaissance.

They also have thoughts of freedom in their minds.

Ethan Gutmann, a veteran analyst of China, said in an interview after his speech opening the Exhibition in the Oxo Tower on the south bank of London’s River Thames, “everybody talks about freedom of expression and people worry about the national security agency and they worry about the things they’ve heard about from Edward Snowden and Julian Assange – but the truth is – isn’t China the living, breathing embodiment of this problem? I mean this is where people are actually dying and are being picked up on the internet, and they are being picked up on the internet for simply wanting to live out their beliefs. Very benevolent beliefs, non-violent beliefs.”

Prominent in his recent book The Slaughter (subtitled Mass Killings, Organ Harvesting, and China’s Secret Solution to Its Dissident Problem) is the attempt by the Chinese Communist Party (CCP) to wipe out the spiritual qigong practice of Falun Gong, also called Falun Dafa, which the artists in this Exhibition practice.

“We look to China and we look to Falun Gong because this has been the heart of the struggle. It’s all taken place there from the Changchun hijackers who hijacked the TV programmes for one night, for one hour; long enough for the people to realise that the (Chinese) government was lying about many things. This, to the fact that the Global Internet Freedom Consortium has been able to help out in Iran, for example. That is a central issue of our times. It goes beyond just China. It goes to the heart of human freedom itself, and so I think that’s what this is about.”

The painting Uncompromising Courage by Kathleen Gillis shows a tortured man in green Chinese jail clothes gaining sustenance from a large majestic hand beaming light and compassion. This depicts Mr Liu Chengjun one of the leaders of the 2002 Changchun hijacking of Communist TV mentioned by Mr Gutmann. Mr Liu died from his torture.

Julia Korner also gave a speech to open the show. A specialist in fine art conservation, she worked for Christies for twenty years as a painting specialist and is an advisor, valuer, and exhibition curator for public and private collections in the UK and around the world.

She has familiarity with secrecy and espionage as her father worked undercover as a resistance fighter throughout the 2nd World War. “I was bought up with the children of the victims of torture and with the personal stories of torture from a lot of my father’s fellow agents. … I know that’s a completely different thing from what is going on in China today but it’s a personal witness to, a personal link for me.”

She said, “It’s a universal outrage. … They [the CCP] are bullies and they are cowards. … You only have to look at these pictures to see the light of the world and the spirit that these artists have and this incredible dignity. It is so impressive. It’s incredibly impressive.”

She said the pictures use a universal language. “These pictures … tell a story that we hope will never happen to us personally. And which humbles us all. It touches our soul. And their simple cry is something so peaceful and so tender.

One of the astonishing accomplishment of the nearly twenty artists in The Art of Zhen Shan Ren International Exhibition is that their techniques blend into one whole. In fact many works are composed and completed by several painters.

“It’s like being taken on a journey through the culture, or through what is humanity,” said Teresa Potocka, while at the opening of the latest UK Exhibition in the Oxo Tower on October 8.

“And how people deal with environments that are censored, controlled and limited, and that comes out in the art,” she continued. She is the founder of UK media business Potocki Communications and had been to a previous showing of the work.

The censorship she is talking about is that of the spiritual practice of Falun Gong by the Chinese Communist Party. The attempt to wipe out the practice by defamation, torture, and killing has been continued since 1999.

“All around the world there are people torturing other people, not allowing religious freedom and freedom of speech, and the barbaric lengths human beings will go to, it never ceases to shock me even though I know about it,” said Norah, a fashion designer who was also there at Wednesday’s opening.

“This is the first time I’ve seen depictions of torture and celebration so closely together of a particular group practicing a spiritual faith,” she said. “I’ve never seen that [before]. You see an occasional image but not a whole selection of art.”

According to the organizers, on the final day of the Exhibition, Sunday,October 26, 732 people came to see the paintings. The total number of visitors over the 19 days was 8,482.

For details of the Oxo Tower exhibiting space, contact the Gallery at gallery@oxo or go to the website
http://www.oxotower.co.uk/events/art-zhen-shan-ren/?utm_source=Coin+Street+emails&utm_campaign=0f311f491c-&utm_medium=email&utm_term=0_2f6a9d8510-0f311f491c-71789169

The Slaughter: Mass Killings, Organ Harvesting, and China’s Secret Solution to Its Dissident Problem by Ethan Gutmann was published in August by Prometheus Books. Ethan Gutmann is Adjunct Fellow at Foundation for Defense of Democracies, and Visiting Fellow at the Project for the New American Century. His book Losing the New China: A Story of American Commerce, Desire and Betrayal was published by Encounter Books in April 2004. Chinese edition: Broad Press, June 2005.

Go to the Art of Zhen Shan Ren website for information on future Exhibitions, past Exhibitions, and commentaries on particular works. website http://www.zsr-art.org.uk/