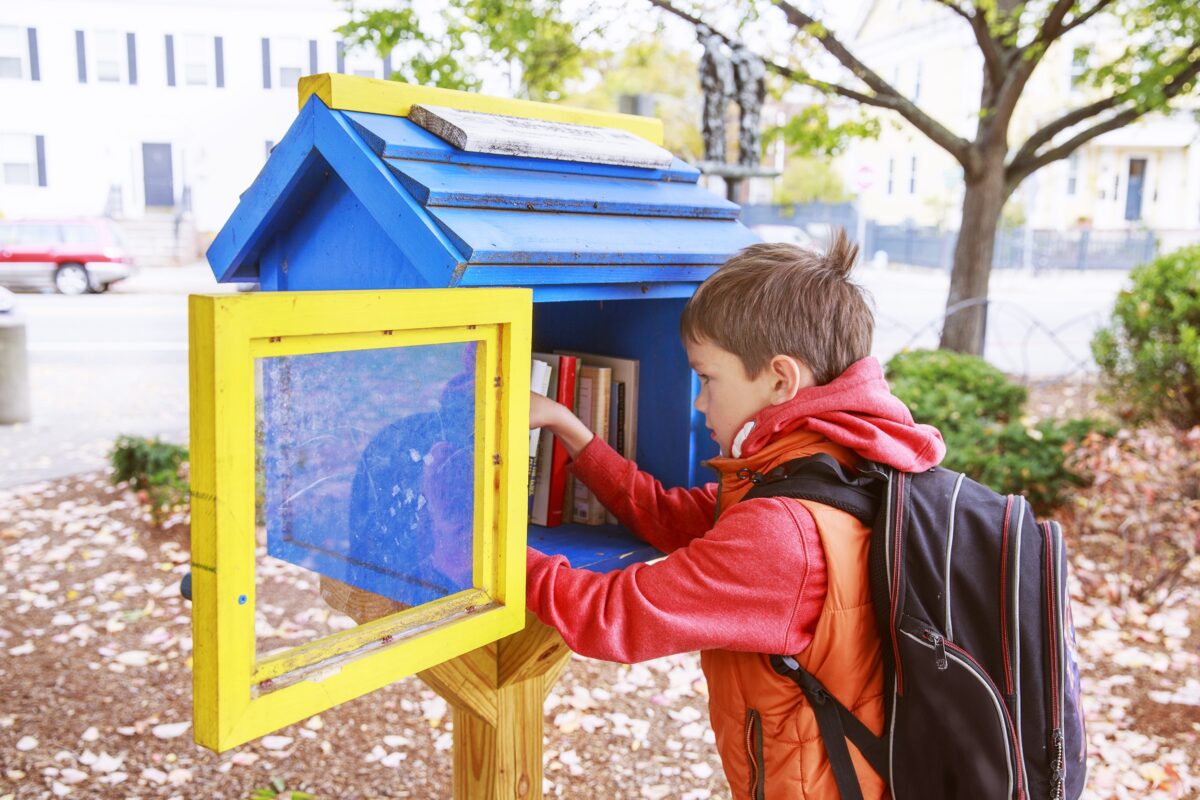 Little Free Libraries help foster a sense of community. You could buy or build your own. (EvgeniiAnd/Shutterstock)
Family & Education

From the time I learned to read, libraries have been a sanctuary. As an adult, I have made my way with words, writing magazine articles and a few books. So, when I recently moved to a small neighborhood in Southwest Portland, Ore., I became fascinated by the number and variety of boxes located throughout the community where people drop off and pick up free books.

There are more than a dozen of these Little Free Libraries. They range from fairly simple wooden boxes, with one or two shelves and a sturdy door with a clear plastic window, all the way to, at the mouth of the neighborhood’s business district, a replica of a red London phone booth in miniature with three layers of bookshelves. And they are as different on the inside as out.

“The Little Free Library really encourages people to make their Little Free Libraries individualistic,” says Karen Anderson, who has hosted a Little Free Library in front of her house in the Ballard neighborhood of Seattle for the last six years. “Someone might have a little library full of children’s books; another might be full of mysteries. Our library is full of science fiction.” She says the organization encourages people to make the designs reflective of themselves. “One family in our neighborhood covered the sides of their little free library with homemade tiles. Each member of their family did one, and each tile has its own little story.”

“You’ve got to have really high-quality building,” Anderson says. “In Seattle, you want to be very careful, not just about rain, but about humidity. You want it to have some sort of ventilation; otherwise, you’ve got a closed, humid box.” As anyone living in the Pacific Northwest can attest, that means mold.

Although the idea of giveaways in America goes back to Native American potlatches and beyond, the Little Free Library project—installing small boxes for people to leave and take books—had its beginnings in rural Wisconsin in 2009. Todd Bol was looking for a way to honor his mother, who had recently passed away. She had been a schoolteacher and instilled in him a love of reading, and Bol had the idea of creating a miniature one-room schoolhouse, which he built from an old garage door. He filled it with a dozen or so books and planted it at the road in front of his farm.

And there it stood, largely unnoticed for the next year. Not many people come down the road in Hudson, Wis. But when he had a garage sale in 2010, neighbors thought the book exchange was a pretty cool idea, so Bol made some boxes for them. “I put up my library and noticed my neighbors talking to it like it was a little puppy,” said Bol in a 2013 Washington Post article. “And I realized there was some kind of magic about it.”

Eventually, he incorporated a nonprofit, tax-exempt organization, Little Free Library, to promote the program beyond his immediate area, spurred on by his friend Rick Brooks, then a University of Wisconsin-Madison professor, who placed the first Little Free Library outside of Hudson on a bicycle path in Madison. Within two years, they had exceeded their goal of matching Andrew Carnegie’s achievement of building 2,509 libraries in the early 20th century. Today, littlefreelibrary.org claims more than 100,000 Little Free Libraries in over 100 countries, and 42 million books shared annually.

Little Free Libraries do more than offer a place for people to recycle reading material; they help foster a sense of community. People are inspired by the simplicity of the idea, and are encouraged by seeing what they give away being taken, and by finding something to read themselves.

“I like what I call ‘giving gifts to the street,’” says Dick Willis, one of my new neighbors who has had a Little Free Library in front of his house for the last five years. “I seeded it with books for about the first year. And then it just took off. I haven’t really supplied much in the way of books for the last four years. People just keep it going.”

Willis can only recall one problem incident involving his Little Free Library.

“There was a girl last summer,” Willis recounts, “who showed up with a bag and just emptied the Little Library. But the neighborhood refilled it, so it was self-healing.”

Manny Frishberg grew up in the shadow of the Brooklyn Bridge and has called the West Coast home for more than 40 years. In his spare time, he practices photography and writes science fiction and more than 40 of his short stories have been published in magazines and anthologies.

This article was originally featured in Radiant Life Magazine.