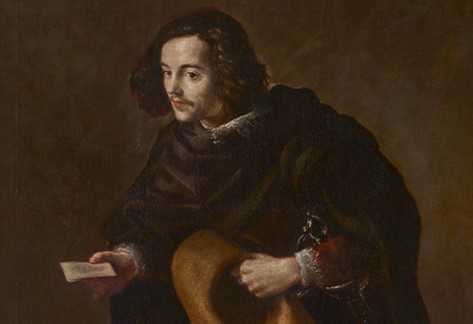 Some paintings encourage the viewer to ask questions about a mysterious subject that may draw the viewer even further into the mystery. An oil painting by Spanish painter Juan Andrés Ricci (1600–1681), also known as Fray Juan Ricci, does this.

“The Messenger” (circa 1640) depicts a handsome young man, hat in hand, delivering a letter to an unknown recipient. The techniques used give the painting an air of mystery. The meaning of Ricci’s work, along with its unusual technique, are enigmatic and draw us in, making us feel a variety of emotions.

The “Messenger” clearly uses the technique of tenebrism, which draws attention to the subject. The face, hands, and hat of the messenger are the first things seen in the composition. In the foreground, the figure is bathed in light while the background is covered in darkness.

Tenebrism, from the Italian “tenebroso” which means gloomy or dark, is a 17th-century Italian and Spanish dramatic pictorial style. The technique greatly impacted the Baroque painting style and spread throughout 17th-century Europe. Spanish artists particularly appreciated and used this it, as is the case with Ricci and his work.

The dark background of this composition seems to heighten the mysteries: what the message is, who the other figure is, and why he is delivering this message. The dark tonal background quite literally leaves the viewer in the dark.

While the meaning of this work remains a mystery, this painting shows how the technique of tenebrism works, which is the stark contrast of light and dark in proximity. Light bathes the messenger’s face and hands against a dark background.

Tenebrism uses the contrasting effects of light and shade to heighten the dramatic effect and the three-dimensional aspect of the character. It creates a spotlight effect on a single subject with the use of both light and dark tones.

This compositional approach also inspired the later “candlelight tradition,” where all light on a canvas emanates from a single candle. Pioneers of this style include Dutch painter Rembrandt and French painter Georges de la Tour.

Some art historians discuss tenebrism along with a similar technique known as chiaroscuro, which combines light and shadow to define three-dimensional subjects. Italian painter Caravaggio introduced and pioneered this technique.

“The Messenger” shows the influence of the great artists of the age: Velázquez and Rubens. The attitude of the messenger is respectful, as he bows and holds his hat. His dynamically inclined posture was most likely inspired by Velázquez’s painting “The Surrender of Breda,” where the same posture can be found in a central figure.

Matías Díaz Padrón, a renowned art historian specializing in 17th-century art, pointed out that the figure of the messenger was often used in other compositions outside of Spain, such as in Rubens’s Cardinal-Infante Ferdinand of Austria at the Battle of Nördlingen (1634–35).

Ricci himself used the messenger figure in other paintings, such as Saint Benedict Blessing the Bread (circa 1655) commissioned by the Monastery of San Juan Bautista in Burgos, Spain. The painting depicts one of St. Benedict’s miracles. In the corner of that painting, there is a messenger figure in the same posture, holding his hat.

This painting in turn influenced other painters of his time, such as Juan Carreño de Miranda, in his painting The Buffoon Francisco de Bazán (circa 1680), with a figure in a similar posture and angle.

In the “Messenger,” Ricci uses directed light and short brushstrokes, which sets him apart from other painters of his time. His technique is discussed to this day, as his paintings were often left unfinished and only had a very thin coat of paint, which greatly affected the conservation of his work. In fact, X-ray analysis showed that this specific painting was probably part of a larger work.

Padrón studied the original painting of “The Messenger” while writing about Ricci, and he noticed cuts, grafts, and repainting on the canvas. He theorized that there could have been a fragment of the painting missing, possibly depicting a sideboard or a table, as well as another figure.

However, as X-rays later showed, his theory proved inaccurate. Further analysis showed four horses next to a man with a chariot under the figures seen. This could be a representation of the triumph of Hercules, when Hercules, stripped of his powers by Zeus, has to fight 10 bronze warriors and a sorceress.

This led researchers to conclude that the canvas was reused, which was very common among artists at the time. Further evidence of reuse comes from stitches on surface of the painting, which can be observed when the canvas is lit from the side. The artist most likely stitched several pieces of canvas together to make the painting we see.

It is surmised that “The Messenger” could have been part of a larger, more ambitious composition, but this is hard to decipher because of conservational difficulties due to Ricci’s unique technique.

Juan Andrés Ricci (1600–1681) was born in Madrid, Spain. His artistic education began with his father, Italian painter Antonio Ricci of Ancona, who came to Spain with his friend, artist Federico Zuccaro. Zuccaro, Antonio Ricci, and other Italian painters came to Spain to help with the decorative work of the historical residence of the king of Spain at the time, El Escorial.

Antonio Ricci decided to stay after others went back to Italy. In Madrid, he opened a workshop that produced and copied portraits. At his father’s studio, Ricci saw important painters of the Castilian court of Spain who visited his father’s workshop, among them, possibly, was Velázquez.

After the young Ricci took vows as a Benedictine monk in 1628, he still followed in his father’s footsteps as an artist. He received important church commissions from the monasteries of San Juan de Burgos, Medina del Campo, San Millán de la Cogolla, Silos, and San Pedro de Cardeña. He also worked as a writer and architect. In 1662 Ricci left for Italy and died there.

The painting, temporarily exhibited in the first part of 2022 at the MNAA, the National Antique Art Museum in Lisbon, Portugal, is part of the Santander Bank Collection.