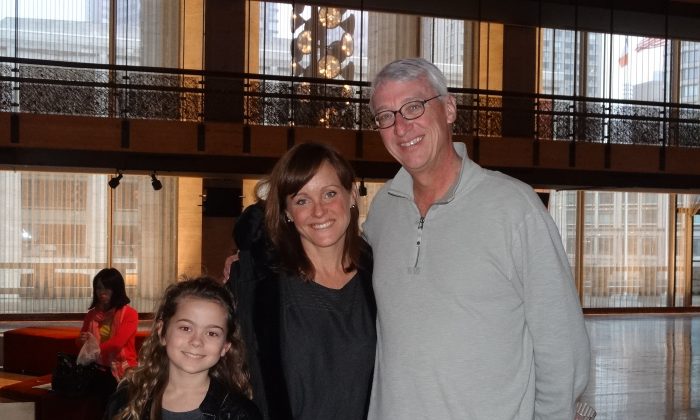 Mr. Piszel was delighted by the dance showing the legend of the evil Dragon King. His wife, Sarah, was entranced by another dance, featuring the long, gracefully flowing silk sleeves, known as “water” sleeves. Their 11-year-old daughter, Katie, agreed that the sleeves were “really pretty and a lot of fun to watch.”

Mrs. Piszel cried during the performance, and choked on tears even as she recalled a dance that depicted the hardships of people in China brutally persecuted for their beliefs.

“You can feel it, in every one of dances and stories,” Mr. Piszel said. “There is deep spirituality to this and it is very nice.”

“I love the idea, that every dance routine has a story behind it,” he said. “I love the traditional values.”

The Shen Yun website explains that the dance form was passed down from antiquity largely through plays.

The website explains: “The movements of classical Chinese dance are rich in their ability to express a variety of feelings, be it happiness, sorrow, joy, anger, grief, delight, the emotions that come with parting and reuniting, insanity, infatuation, sickness, tipsiness, solemnity, ignobility, majesty, as well as civil, military, and other personalities and stories.”

The minute gestures and postures are all rich in meaning and require great dedication to learn, though they appear effortless on stage.

“It’s beautiful,” said Mr. Piszel. He and his wife were also amazed by the unique digital backdrop, which opens the stage to colorful, animated scenes.

“They jump … out of the screen on to the stage; it is seamless as they come from the screen to on stage,” Mrs. Piszel said of dancers.